The uranium content of rocks is more variable than was thought, say geologists. The finding should lead to more accurate dating of geological events.

Ignorance of the variation has created small errors in our chronology of the world. Correcting this oversight should put geological dating on a solid scientific footing for the first time. 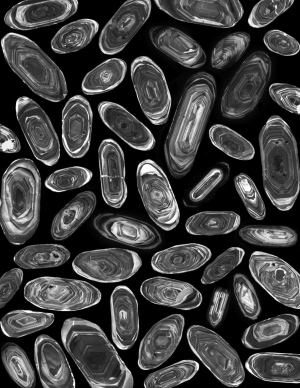 Zircon crystals such as these are slightly younger than was previously thought.

Many minerals, such as zircon, contain minute quantities of two forms of uranium, with atomic weights of 235 and 238. Each decays at a constant rate into lead atoms with weights of 207 and 206, respectively. By comparing the amount of uranium in a sample with the amount of lead, geologists can work out when the rock formed.

Uranium–lead dating of zircon crystals has been used to measure the age of everything from volcanic rocks to meteorites. The technique, however, has always been based on the assumption that the ratio of 238U to 235U was a constant 137.88 to 1 in all rocks.

“This is something we assumed was the same number everywhere on the planet,” says Daniel Condon, head of chronology research at the British Geological Survey in Keyworth.

But when Condon and his colleagues measured the actual ratio in 58 samples of different minerals from around the world, they found that it varied from 137.743:1 to 138.490:1.

Writing in Science1 today, the team suggests that the geological community should adopt a new average figure: 137.818 ± 0.045.

Using the slightly smaller ratio would mean that the ages of many rocks would be reduced by around 800,000 years, says Condon, although in many cases the changes are within the accepted range of uncertainty.

But that uncertainty range is itself going to grow, because the ratio in conventional use does not have uncertainty factored into it, as the new one does.

Three of the team's samples had uranium–lead ratios bigger than 138.0:1. The most extreme outliers could shift dates by 10 million years if they were factored into the revised ratio. But Condon says that all zircon from rocks typically used to date most of geological time falls within the range used to create the new ratio.

“The Earth is still the same age,” he assures Nature.

The work “definitely helps the accuracy of terrestrial dating”, says Greg Brennecka, an isotope geochemist at Arizona State University in Tempe. “Just the realization that these things do vary is important,” he adds.

The conventional ratio of 137.88:1 was derived from a consensus opinion among geologists, rather than a hard measurement. The latest work will mean that geochronology is based on "real physical quantities that can be precisely measured, defined and internationally agreed upon", says Condon.

James Mattinson, a geochronologist at the University of California, Santa Barbara, says that the data in the latest paper “beautifully refine accuracy and error analysis for dating”.