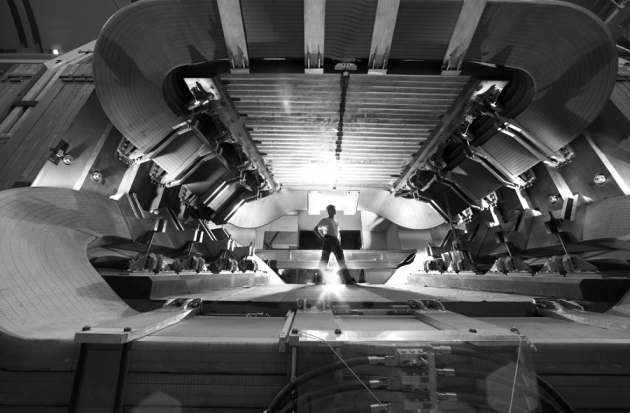 At CERN’s LHCb detector, physicists meticulously measure the decay of B mesons.

The world’s most powerful particle accelerator, the Large Hadron Collider (LHC), works incredibly well, but the next rung of understanding still seems to be just out of reach. Grasping it looks increasingly like a game of patience and precision, rather than just jumping higher. An effort to explore rare decays of ‘beauty’ particles is among the most promising lines of enquiry.

Researchers are desperate to unravel physics beyond the standard model, a description of particles and their interactions. Developed in the 1970s to unify three of the four fundamental forces, the standard model is concise enough to fit on a mug, and its predictions have been verified with dizzying precision. That culminated in the 2012 discovery of the Higgs boson by the LHC at CERN, Europe’s particle-physics laboratory near Geneva, Switzerland.

But physicists know that the standard model is not the end of the story, not least because it doesn’t include gravity or explain dark matter. It is at best part of a wider undiscovered framework, or an approximation of a more fundamental theory. At the optimistic start-up of the LHC in 2009, the path beyond the standard model seemed marked out. Many theorists assumed that particles predicted by an elegant extension to the model — supersymmetry — would reveal themselves as soon as colliders could reach a high enough energy.

Since then, LHC experiments have smashed together quadrillions of particles at record energies, and no supersymmetric particles have emerged. Proponents have not given up hope, but they have ruled out the simplest versions of their theories. Now, rather than rely on conjuring new particles, many are hoping to observe their effects indirectly, prying open tiny cracks in the standard model by exploring a handful of findings that don’t quite fit predictions. Two reviews in this week’s Nature examine one area in which anomalies are accruing (see pages 221 and 227). Excitement is growing about the strange and subtle behaviour of particles called B mesons, whose properties make them ripe for observing the effects of new physics.

CERN’s LHCb and other ‘B-factory’ experiments, such as Belle at Japan’s High Energy Accelerator Research Organization (KEK) in Tsukuba, have often worked in the shadows of their more famous sister experiments. Eschewing the need for higher and higher energies, B factories hoover up data on rare decays of B mesons, which contain b quarks (denoting ‘beauty’ or ‘bottom’). Physicists make precise measurements of how B mesons decay into known particles, searching for tiny discrepancies that would reveal the influence of hypothetical heavy particles that appear fleetingly but leave their mark.

Several such discrepancies exist in various B-meson decays, any of which on its own would not raise an eyebrow. But together they seem to fit into a broader picture. Each anomaly hints at the existence of the same exotic new particle. Its identity is not yet known, but candidates include a heavier type of Z boson — a Zʹ— or a ‘leptoquark’. Some see this as a wishful cobbling together of statistical flukes: most of the discrepancies are just a few standard deviations away from expectations, and far from the five standard deviations that physicists require to declare a discovery. Yet the strongest of the anomalies — in the rates at which B mesons turn into pairs of different kinds of lepton (electrons and their heavier cousins, muons and taus) — has been seen by three separate experiments, whose combined data give a tantalizing standard deviation of four.

Physicists have found few other anomalies to lead them beyond standard-model physics. One involves looking at a deviation in how muons wobble on their axes as they travel in a magnetic field. Many experiments are probing neutrinos — ghostly particles that the standard model assumed were massless, but turned out not to be, and whose basic behaviour physicists are just starting to understand. Meanwhile, other once-promising leads are fading. The proton-radius puzzle — in which experimental physicists disagree over the ubiquitous particle’s size by as much as 4% — could well be down to an incomplete understanding of the measurement process. And a shortage in the number of antineutrinos arriving at experiments near nuclear reactors looks increasingly likely to be caused by errors in calculating the predicted rate.

Beauty physics offers a rare glimmer of hope. The LHCb will continue to rack up data, and KEK’s upgraded B-factory detector, Belle II, starts up next year. If anomalies fade with more data, a planned upgrade to the LHC — which will ramp up the intensity of collisions from 2025 — could provide a new proving ground.

Discovery in high-energy physics is turning out to be less like swashbuckling through Terra Incognita than some might have hoped. But groping for tiny cracks can also reveal unknown territory — it just takes more patience.