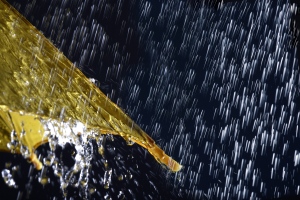 The friction on falling raindrops dissipates a surprisingly large amount of the mechanical energy in the atmosphere.

Rainfall soothes the atmosphere, atmospheric scientists have found. They calculate that a substantial portion of the energy that drives wind and air circulation in the atmosphere is dissipated as friction by raindrops falling through the air.

The atmosphere acts like a heat engine, generating mechanical energy by moving heat from Earth’s surface, where air has been warmed by the Sun, to the colder air above. Some of that becomes kinetic energy of air, driving movements ranging from large-scale flows such as the jet streams down to small gusts and eddies. Ultimately this energy is dispersed in turbulence: air molecules swirling around chaotically ‘rub together’, warming up slightly.

But some of the dissipation of mechanical energy happens when a falling raindrop (or snowflake or hailstone) experiences friction as it passes through the surrounding air.

The friction on an individual raindrop is so small that it is tempting to dismiss it as a significant source of dissipation. But atmospheric scientists Olivier Pauluis at New York University and Juliana Dias at the US National Oceanic and Atmospheric Administration (NOAA) in Boulder, Colorado, have found that, on a global scale, so much precipitation falls that it dissipates almost as much atmospheric energy as does turbulence1. The work is published today in Science.

Isaac Held, an atmospheric scientist at NOAA who has worked on this problem with Pauluis in the past, says that “it is impressive and counterintuitive that nearly as much energy is seemingly being dissipated by this mechanism as by the turbulent cascade of energy from jet streams and storms of all kinds”.

Pauluis says that, although the result might seem surprising even to some other atmospheric scientists, it is what those working on the problem have long suspected. “The results are in good agreement with previous theory and modelling,” he says.

A drop in the bucket

Kevin Trenberth, an atmospheric scientist at the US National Centre for Atmospheric Research in Boulder, points out that the amount of kinetic energy involved is in fact all quite small in comparison with the total amount of energy bound up in the climate system (mostly heat), which adds up to about 240 watts per square metre of Earth's surface. Dissipation from rainfall accounts, on average, for only about 0.75% of that – 1.8 watts per square metre. “In fact, it’s always a bit surprising to me how small the total amount of kinetic energy generated is and thus how much is dissipated,” says Trenberth.

All the same, the total global total rate of energy dissipation from precipitation is around 1015 watts, about 100 times the rate at which humans consume energy worldwide.

Pauluis and Dias derived their estimate of energy dissipation from satellite measurements of the rates of global precipitation. NASA’s Tropical Rainfall Measuring Mission satellite uses radar to deduce how much rain is falling at different heights in the atmosphere over the tropics (between the latitudes of 40o N and 40o S). From these numbers, the researchers calculated how much frictional drag the droplets experience.

Some experts are still reserving judgement. “The drag force on a raindrop is not all frictional, especially for larger drops,” says Ramesh Srivastava, a cloud physicist at the University of Chicago, Illinois. “So I think their value of frictional dissipation is considerably over-estimated.”

But if rainfall does indeed remove this much kinetic energy from the atmosphere, then the increase in precipitation predicted in models of global warming — which is mostly attributable to increased rates of evaporation — could have important consequences for atmospheric circulation. In effect, precipitation might be expected to ‘suck up’ some of the energy that is currently manifested in wind.

“That is a reasonable implication of our study,” says Pauluis. “But it is difficult to assess what it would mean for specific weather systems. The intensity of individual storms could still go up while the total dissipation goes down, as long as the number of storms goes down.”

These changes might, however, be dwarfed by the wider changes to atmospheric circulation and energy flows caused by global warming, says Geraint Vaughan, an atmospheric physicist at the University of Manchester, UK. “I don’t think this mechanism will have important implications for atmospheric dynamics in a warmer world.”