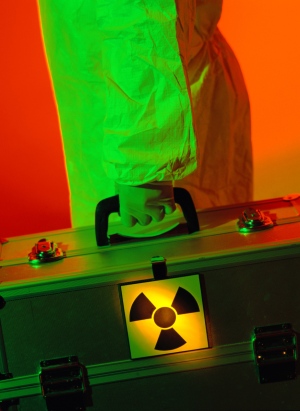 Nuclear looters are on the prowl in Egypt.

The theft this week of radioactive material from a nuclear power plant under construction in Egypt has highlighted once again the dangers of nuclear looting in countries undergoing social upheaval.

The International Atomic Energy Agency (IAEA) has confirmed that the material was taken from a laboratory at the El Dabaa nuclear power plant on the country’s Mediterranean coast. “According to the information we have, the items that have gone missing are low-level radioactive sources,” says an IAEA spokesperson.

The sources probably have a long half-life, and would have been used to calibrate radiation detectors, says Ronald Chesser, director of the Center for Environmental Radiation Studies at Texas Tech University in Lubbock. “They were small check sources, in the microcurie range,” says Chesser. “This is pretty low-level stuff, but it still is a concern that they are in unknown hands.” Calibration sources typically contain small amounts of an isotope — not enough to cause widespread contamination, but with the potential to trigger public panic if released.

The El Dabaa theft is not unique. In 2003, for example, following the chaos that ensued after the US-led invasion of Iraq, the Al Tuwaitha Nuclear Research Center outside Baghdad was targeted by looters who stole radioactive caesium and cobalt sources. They also dumped some 200 stolen barrels containing yellowcake — processed uranium ore — in the vicinity of the site.

El Dabaa had recently been targeted by protesters who are claiming that their land was wrongly taken by the government to make way for the plant. As a result of those protests, the site had been shut down and workers were not in the facility at the time of the theft, according to local news reports.

After years of stop-start efforts, Egypt’s nuclear-energy ambitions are once again in flux. Deposed Egyptian president Hosni Mubarak had pushed hard in recent years to reinvigorate the country’s nuclear-power ambitions, backing plans to build four nuclear power plants at El Dabaa, including the 1,200-megawatt facility under construction there. The first plant was scheduled to start producing electricity in 2017, but the new government has not made any statements about its plans for the plant since construction was suspended.