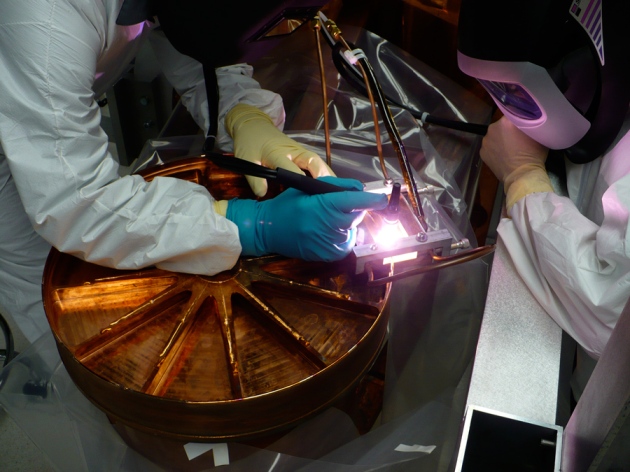 A detector at the EXO-200 experiment during construction.

Uncertainty is hanging over the future of a key particle physics experiment. The facility, a detector built for studying neutrinos, is housed deep below the New Mexico desert alongside the United States' only deep geological repository for nuclear waste. But researchers have not had access to the underground site since February, when an accident at the repository released radioactivity, and so they have been forced to mothball the experiment.

The Enriched Xenon Observatory-200 (EXO-200) was installed in 2007 at the Waste Isolation Pilot Plant (WIPP) near Carlsbad, a repository 655 metres underground dug out of a salt bed. By the time of the accident, researchers working around the clock had accumulated two years of data; the findings appear in Nature today1.

The accident could not have happened at a worse time, says Giorgio Gratta, a physicist at Stanford University in California, and EXO-200's principal investigator. The detector was in the middle of an upgrade to improve its sensitivity; it was intended to run for a further two to three years, but that plan is now in question, he says. "The present situation at WIPP is very bad."

EXO-200 is one of a handful of experiments worldwide trying to resolve the quandary of whether neutrinos are their own anti-particles by looking for an elusive phenomenon known as neutrinoless double β decay.

Ordinary double β decay is a form of radioactive decay where elements transmute by jumping two steps ahead in the periodic table — for example, from xenon to barium. Two neutrons in the nucleus simultaneously transform into protons, and in the process they emit two electrons (β rays) and two anti-neutrinos. If neutrinos and anti-neutrinos were the same thing (a hypothetical phenomenon known as a Majorana particle), then the two anti-neutrinos could mutually annihilate as soon as they are produced. Physicists would detect the outcoming electrons but no anti-neutrinos.

Such 'neutrinoless' double-β decay would imply that neutrinos are Majorana particles, hypothetical entities that are their own antiparticles. This in turn could explain why neutrinos have mass — an observed fact that seems to contradict the standard model of particle physics.

The results published in Nature today show no neutrinoless decay. They put the strictest limits yet on how often neutrinoless decay could occur without being spotted — a figure that will also put an upper limit on the neutrino's mass.

The EXO-200 detector uses 200 kilograms of liquid xenon, enriched with the isotope xenon-136 and held at a temperature of 167 kelvin. It demands extremely low levels of background radioactivity, and perhaps counter-intuitively WIPP provides it with an ideal home. Deep underground, the detector is shielded from cosmic rays, and the background radioactivity of the salt bed is much lower than that of other rock types, many of which release radiation or radioactive substances such as radon gas, explains Gratta.

But keeping the detector cool involves sophisticated and delicate cryogenics and other hardware that require continual maintenance, he says. The machine must also be continually relevelled to adjust to the constantly shifting salt floors. With no access to the detector for months, the researchers have had no choice but to shut it down, at least temporarily, says Gratta.

He is "very concerned" about how long it might be before researchers are allowed back in, and worries that the detector will be in a bad state by the time they can get to it. He hopes to get into the underground lab before the waste repository is opened. The experiment is at the north end of the mine, far from the southern end where waste is stored and radioactive contamination from the accident is still a problem.

Doug Weaver, the underground test coordination office manager at WIPP, says that when scientists can be allowed back will depend on the progress of recovery efforts. He hopes that EXO-200 scientists could be let in during July or August, at least to carry out essential maintenance. Further entry would be permitted later to get the experiment back up and running.

It remains unclear when the repository itself will reopen. The radioactive leak is thought to have happened when the contents of one or more waste drums underwent a chemical reaction and ruptured — and last month, US authorities estimated that at least 368 drums of waste at the site could be prone to the same reaction.

Last week, the US Department of Energy and the Nuclear Waste Partnership — the contractor that operates the WIPP site — said it would take at least two years to seal off the suspect barrels.

The drum known to have ruptured was part of a batch from the Los Alamos National Laboratory (LANL) in New Mexico. It contained nitrate salts, and authorities suspect that these may have reacted with an absorbent used to mop up liquids, generating heat that blew the lid off the drum.

But a new hypothesis emerged last week, after it was disclosed that a contractor to LANL, EnergySolutions of Salt Lake City, Utah, had switched from dry reagents previously used to neutralize acids and bases in the waste, to liquid ones. The liquid reagents are known to react with nitrates. In an August 2013 e-mail, an EnergySolutions employee involved in the switch told a LANL official, "As the water reactivity of plutonium and criticality safety issues are not my area of expertise it may be advisable to have LANL personnel weigh in on these issues as well."