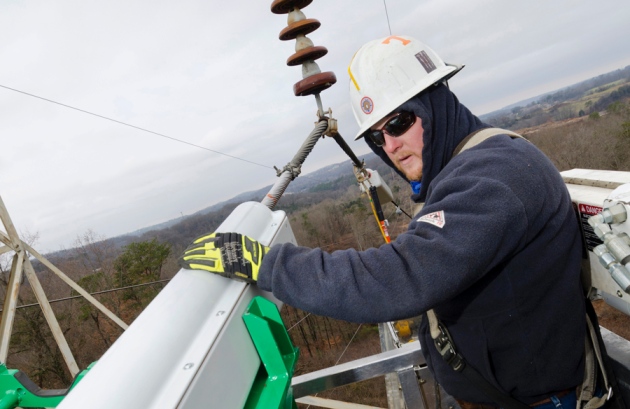 An ARPA-E-funded technology to control power flow is being used by US utility companies.

As it enters its seventh year, an ambitious US Department of Energy effort to trigger innovation in clean-energy technology is celebrating some success. At the start of the annual summit of the Advanced Research Projects Agency—Energy (ARPA-E) on 9 February, the programme’s management announced that ARPA-E-supported technologies have attracted US$850 million in private investment.

At the same time, however, the market for new ideas in energy is not booming, and the mood at the summit was more sedate than in earlier years, when sessions swarmed with investors looking for the next big thing. Most observers of energy innovation counsel patience: even useful ideas often take decades to reach broad application. The US defence department’s Defense Advanced Research Projects Agency (DARPA) was the model for ARPA-E, and its biggest success story — the Internet — took decades to be recognized.

“If we look in 20 or 30 years and can’t see an impact, then we can say we have failed,” says Ilan Gur, a former ARPA-E programme director who now heads a programme to advance technological innovation at Lawrence Berkeley National Laboratory in Berkeley, California. “The real contribution that ARPA-E has had is in laying out the challenges and bringing together the communities that can solve them.”

General enthusiasm for nudging new technologies to market has shrunk since ARPA-E was founded. Venture-capital investments in the United States have dropped off sharply in the past two years; funding for early-stage clean-energy research has almost disappeared. The administration of US President Barack Obama is seeking to reverse that trend with an initiative, announced on 10 February, to increase private investment. As part of this, the University of California Board of Regents has committed to invest $1 billion of its endowment and pension in climate-friendly technologies. The White House also plans to hold a clean-energy investment summit in coming months.

In its six years, ARPA-E has invested around $1.1 billion in 400 projects, ranging from large-scale electricity storage to modern grid technologies, improved biofuels and efficient methods of capturing carbon dioxide from power plants. It is often credited with injecting enthusiasm into the field. But in the slow-moving industry, its actual impact has been difficult to determine.

“I think we are starting to make a difference,” says Martin. “We are tackling global problems and having tangible results.”

ARPA-E grants are relatively large — up to $10 million over three years — but come with strings. Projects must have ongoing, direct engagement with programme managers, and meet strict performance benchmarks. So far, the agency has cancelled 21 projects, and staff members have worked to redesign others in light of surprising results.

“ARPA-E really did create an ecosystem of innovation that did not exist before.”

The agency funds academics and small start-up companies, but it also supports research by industrial giants such as United Technologies Corporation (UTC) of Hartford, Connecticut, which has led several projects and has been involved in about a dozen others. Company officials say that these projects — which include batteries, advanced manufacturing, refrigeration and natural-gas storage — are in a grey area where the market does not justify private investment in early-stage technology.

“ARPA-E really did create an ecosystem of innovation that did not exist before,” says Craig Walker, who oversees energy technology at UTC’s research arm. He estimates that perhaps two-thirds of the work funded by ARPA-E over the past six years falls into categories that did not have a home in conventional funding agencies.

That is how ARPA-E was conceived. A 2007 report by the US National Academies proposed an agency to fill a gap between basic and industrial energy research. It called for ARPA-E’s budget to build up to around $1 billion annually over the course of five or six years, but despite fairly broad bipartisan support, the agency has been stuck at around $280 million since 2012.

For Douglas Kirkpatrick, chief executive of technology firm BlackPak of San Francisco, California, the funding situation is not necessarily a bad sign. He says that many investors entered the game a few years ago thinking that they could get rich on a hot new energy technology, as with the Internet boom, but energy markets are slow and methodical.

BlackPak is developing a low-pressure natural-gas tank that could loosen petrol’s grip on the transportation sector. With that ambitious goal, the project has attracted $4.6 million in ARPA-E funding, but its first step is decidedly modest: corner the market in golf-course lawnmowers. Cars come later. “You start by chewing on the tail of the elephant,” says Kirkpatrick.

He learned that lesson during eight years at DARPA, first as a programme manager and then as chief scientist. DARPA targets its products at the US military rather than golf courses, Kirkpatrick explains, but the same principle applies: you need patience to see whether a technology will spread.

“You’ve just got to populate the space and then wait.”