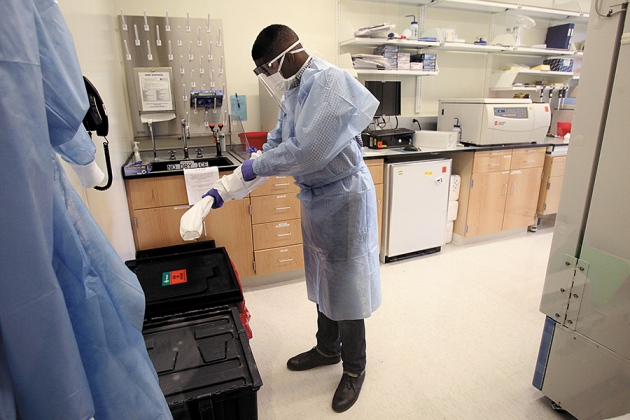 Minority researchers in the United States consistently win NIH funding at lower rates than their peers.

Minority scientists are less likely than their peers to have biomedical research grants funded — and the disparity has barely changed in 30 years, according to data from the US National Institutes of Health (NIH). The numbers, requested by two California researchers to reignite discussion about diversity in the scientific workforce, show no consistent improvement, even though the proportion of minority grant reviewers has climbed.

Pulmonologist Esteban Burchard and epidemiologist Sam Oh of the University of California, San Francisco, shared the data with Nature after obtaining them from the NIH through a request under the Freedom of Information Act. The figures show that under-represented minorities have been awarded NIH grants at 78–90% the rate of white and mixed-race applicants every year from 1985 to 2013 (see ‘Persistent gap’). 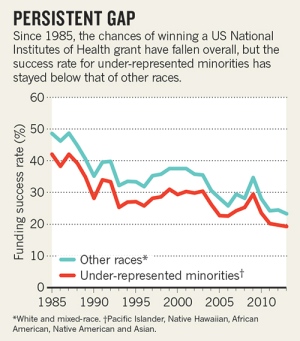 Burchard and Oh had hypothesized that they might see an increase in funding for under-represented minorities after a 1994 NIH mandate that investigators must include women and minorities in clinical studies. They reasoned that the increased emphasis on minority health would create a virtuous circle by boosting grants to minority researchers, who, they posit, would be more likely to focus on those groups and help to fulfil the mandate.

But there seems to have been no such increase. As a result, Burchard and Oh worry that a racial divide could develop between researchers and the people they study. Burchard notes, for example, that a lack of diversity among trial participants may have caused problems for two drug companies that produced an anticlotting drug that had reduced efficacy in East Asians and Pacific Islanders. The attorney-general of Hawaii filed a lawsuit against the companies last year for failing to disclose the issue. “It’s a public-health problem,” he says.

In a commentary in PLoS Medicine next month, Burchard and Oh will argue that scientific workforce diversity helps to ensure that research addresses issues relevant to all.

Other researchers say that airing the new data serves a purpose. “It raises the question in all of us as to the root causes of these disparities,” says David Burgess, a cell biologist at Boston College in Chestnut Hill, Massachusetts, who is lead principal investigator of the National Research Mentoring Network, a US$19-million initiative announced by the NIH in October 2014 to improve mentorship of scientists from under-represented groups.

But the data offer no clues to such questions, counters Raynard Kington, president of Grinnell College in Iowa and former deputy director of the NIH. “It’s not surprising, not new, and doesn’t answer questions of how we can intervene to give every scientist the opportunity to contribute,” he says. In 2011, he co-authored a paper that found that black applicants for NIH funding were about two-thirds as likely as white people to receive grants during the years 2000–06, even accounting for factors such as publication record and training (D. K. Ginther et al. Science 333, 1015–1019; 2011).

He and others point to evidence that funding can be influenced by personal bias. In February, researchers who analysed nearly 19,000 North American faculty hiring decisions in computer science, business and history reported that elite institutions predominantly hire people who earn their doctorates from the same or other elite schools. One-quarter of the 461 institutions surveyed had trained 71–86% of tenure-track faculty, depending on the discipline (A. Clauset et al. Sci. Adv. 1, e1400005; 2015).

Such studies hold evidence of what biologist Margaret Werner-Washburne of the University of New Mexico in Albuquerque calls “positive bias” or in-group bias: the tendency for people to favour other people and institutions that they know either personally or by reputation.

“I think this happens a lot in the granting world,” she says. “Is it that when you’re on a panel and you have to rate 15 grants from the top people in the field who have really produced a lot, from major schools, you just want to root for them because their skill and potential is so apparent, versus someone who isn’t from that world?”

How to tackle racism in UK universities

Cardiologist Hannah Valantine, who became the NIH’s first chief officer for scientific-workforce diversity in 2014, says that the agency is focused on demonstrating the benefits of diversity and how to achieve it. She adds that in response to Kington’s 2011 paper, the NIH has allocated more than $500 million to programmes to evaluate how to attract, mentor and retain minority researchers. The agency is also studying biases that might affect peer review, and is interested in gathering data on whether a diverse workforce improves science. Although diversity benefits businesses and individual scientific investigators, it has not been shown to broaden the scope of research, says Valantine.