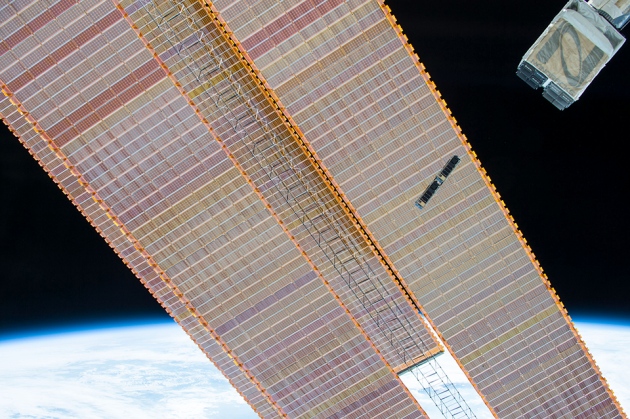 Satellites operated by Spire Global will contribute to US government weather forecasts.

A controversial push to expand the US government’s use of commercial Earth-observing satellites is about to kick into high gear.

Early next month, aerospace start-up Spire Global of Glasgow, UK, will send a mini-satellite into space aboard an Indian government rocket. This ‘cubesat’ will join 16 others that are beaming a new type of atmospheric data back to Earth — and some scientists worry that such efforts are siphoning funding away from efforts to push forward the science of weather forecasting. Spire will begin providing observations to the US government on 30 April.

The probes track delays in radio signals from Global Positioning System (GPS) satellites as they pass through the atmosphere — a technique known as radio occultation. Researchers can use the data to create precise temperature profiles of the atmosphere to feed into weather-forecasting models — and eventually, perhaps, climate models.

Spire and its competitor GeoOptics of Pasadena, California, are participating in a pilot project announced in September by the US National Oceanic and Atmospheric Administration (NOAA), which is under pressure from the US Congress to determine whether it can cut costs by using commercial weather data. But scientists worry that such efforts are hampering the development of radio occultation. For years, they have sought federal funding for a project to advance the technique, but Spire and its competitors say they can offer high-quality data for a fraction of the price.

“We are going to provide a lot more observations for less money, and that is how weather forecasts get better,” says Alexander MacDonald, a former NOAA meteorologist who now leads Spire’s modelling programme.

Scientists at the University Corporation for Atmospheric Research (UCAR) in Boulder, Colorado, are poised to begin their own radio-occultation mission in September, when SpaceX of Hawthorne, California, will launch six small satellites into orbit over the tropics. This is the first phase of the Constellation Observing System for Meteorology, Ionosphere, and Climate-2 (COSMIC-2), which is funded by the US and Taiwanese governments.

The US$420-million project seeks to provide the same measurements that the commercial sector is promising, although with much greater precision. But its second phase — the launch of polar-orbiting satellites to ensure global data coverage — has not been funded.

“I’m supportive of getting more private companies to provide satellite information,” says Bill Kuo, who directs COSMIC-2 at UCAR. “But so far we have not seen that the private sector can provide this data with the same level of quality and accuracy.”

Radio occultation has been used to study weather since 1995, when scientists at UCAR and NASA’s Jet Propulsion Laboratory (JPL) in Pasadena launched a proof-of-concept mission. The first COSMIC satellites followed in 2006. Two are still feeding data into forecasting systems at NOAA and other meteorological agencies, as are a handful of other satellites.

Kuo says that the increased sensitivity of COSMIC-2 will allow higher-quality measurements that extend through the moisture-rich lower atmosphere to Earth’s surface. The goal is to determine how much those advanced data will improve forecasts, he says, but without the second set of satellites there will be coverage gaps at high latitudes.

Weather forecasters around the world feed about 40 million environmental measurements into their models each day. Just 2,100 come from radio occultation, but those data have an oversized impact on overall accuracy, says Sean Healy, a senior scientist at the European Centre for Medium-Range Weather Forecasts in Reading, UK. Ideally, COSMIC-2 would provide global coverage, he says, but forecasters will take what they can get — including commercial data.

GeoOptics expects to launch its first satellite later this year. Another firm, PlanetiQ of Boulder, will launch its first two spacecraft next year. Thanks to falling prices for microelectronics and space launches, these firms argue that the future of radio occultation — and potentially other types of Earth observation — rests with the commercial sector.

“We can now put up a constellation of 12 satellites for $15 million,” says Thomas Yunck, a former engineer at the JPL and founder of Geo-Optics. Yunck says that the data would become almost free if the various forecasting centres around the world shared the cost of operations.

A looming question, however, is who will pay for the data. NOAA makes data from its weather satellites available at no cost, and agency officials have said that a World Meteorological Organization resolution would require them to do the same with commercial data that they receive. So far, the agency has offered Spire and GeoOptics contracts worth $370,000 and $695,000, respectively, for the delivery of initial data.

The companies say that if NOAA were to purchase their data and give them away for free, it would have to pay enough to cover the firms’ costs and ensure a profit. Or the companies could market the data independently to forecasting centres globally. Either way, they say, all researchers would have free access to the data.

“I don’t consider this insurmountable,” MacDonald says. “It’s going to be in the interest of the governments and the private sector to work out a way to get it paid for.”