Quantum supremacy might sound ominously like the denouement of the Terminator movie franchise, or a misguided political movement. In fact, it denotes the stage at which the capabilities of a quantum computer exceed those of any available classical computer. The term, coined in 2012 by quantum theorist John Preskill at the California Institute of Technology, Pasadena1, has gained cachet because this point seems imminent. According to various quantum-computing proponents, it could happen before the end of the year.

Computer scientists and engineers are rather more phlegmatic about the notion of quantum supremacy than excited commentators who foresee an impending quantum takeover of information technology. They see it not as an abrupt boundary but as a symbolic gesture: a conceptual tool on which to peg a discussion of the differences between the two methods of computation. And, perhaps, a neat advertising slogan. 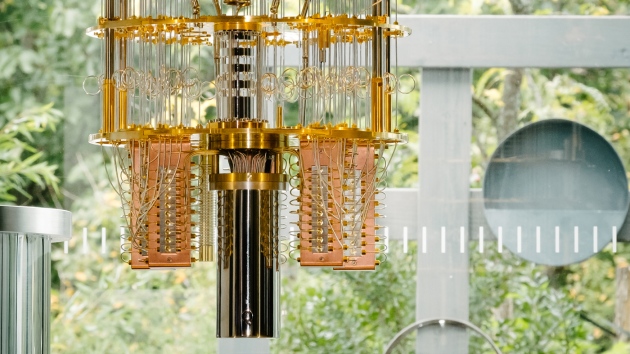 An IBM cryostat wired for a 50-qubit system.

Quantum computers manipulate bits of information according to the quantum rules that govern the behaviour of matter on the smallest scales. In this quantum world, information can be coded as quantum bits (qubits), physically composed of objects that represent binary 1s and 0s as quantum states. By keeping the qubits in a coherent quantum superposition of states – so that in effect their settings are correlated, rather than being independent as in the bits (transistors) of classical computer circuitry – it becomes possible to carry out some computations much more efficiently, and thus faster, with far fewer (qu)bits, than on classical computers.

Both IBM and Google have already developed prototype quantum-computing devices. IBM has made a 5-qubit device available for public use as a cloud-based resource and on 10 November it announced that it had made a 20-qubit device available for commercial users. Its computer scientists also reported on the same day that they had successfully tested a 50-qubit circuit. Google, too, is developing devices with 49–50 qubits on which its researchers hope to demonstrate quantum supremacy by the end of this year2.

How could anyone know, though, that a quantum computer is genuinely doing something that is impossible for a classical one to do – rather than that they just haven’t yet found a classical algorithm that is clever enough to do the job? This is what makes quantum supremacy a theoretically interesting challenge: are there classes of problem for which it can be rigorously shown that quantum computing can do what classical cannot?

Among the favourite candidates are so-called sampling problems, in which in-effect random bits are transformed into bits that come from a predefined distribution. The Google team in Santa Barbara, California, led by John Martinis, has described an experimental procedure for implementing such a sampling scheme on a quantum computer, and has argued that at the 50-qubit level it could show quantum supremacy2.

Because of this paper, 50 qubits has become something of an iconic number. That’s why a recent preprint3 from Edwin Pednault and co-workers at IBM's Thomas J. Watson Research Center in Yorktown Heights, New York, showing how, with enough ingenuity, some 49-qubit problems can be simulated classically, has been interpreted in some news reports as a challenge to Google's aim to demonstrate quantum supremacy with only 50 qubits.

It's all about depth

But it’s not really that. Quantum-computing experts are now finding themselves obliged to repeat a constant refrain: it’s not just about the number of qubits. One of the main measures of the power of a quantum circuit is its so-called depth: in effect, how many logical operations (‘gates’) can be implemented in a system of qubits before their coherence decays, at which point errors proliferate and further computation becomes impossible. How the qubits are connected also matters. So the true measure of the power of a quantum circuit is a combination of factors, which IBM researchers have called the “quantum volume”.

This means that the extent to which a quantum-computational task is challenging to perform classically depends also on the algorithmic depth, not just on how many qubits you have to throw at it. Martinis says that the IBM paper is concerned only with small-depth problems, so it’s not so surprising that a classical solution still exists at the 49-qubit level. “We at Google are well aware that small-depth circuits are easier to classically compute”, he says. “It is an issue we covered in our original paper.”

Scott Aaronson, a computer scientist at the Massachusetts Institute of Technology, agrees that the IBM work doesn’t obviously put quantum supremacy further out of reach. “It is an excellent paper, which sets a new record for the classical simulation of generic quantum circuits,” he writes – but “it does not undercut the rationale for quantum supremacy experiments.”

Indeed, he says, the truth is almost the opposite: the paper shows that it’s “possible to simulate 49-qubit circuits using a classical computer, [which] is a precondition for Google’s planned quantum supremacy experiment, because it’s the only way we know to check such an experiment’s results.” In essence, the IBM paper shows how to verify the quantum result right up to the edge of what is feasible – so computer scientists and engineers can be confident that things are OK when they go beyond it. The goal, Aaronson says, can be likened to “get[ting] as far as you can up the mountain, conditioned on people still being able to see you from the base.”

These views seem to sit comfortably with the IBM team’s own perspective on their work. “I think the appropriate conclusion to draw from the simulation methods we have developed is that quantum supremacy should properly be viewed as a matter of degree, and not as an absolute threshold,” says Pednault. “I, along with others, prefer to use the term ‘quantum advantage’ to emphasize this perspective.”

Theorist Jay Gambetta at IBM agrees that for such reasons, quantum supremacy might not mean very much. “I don’t believe that quantum supremacy represents a magical milestone that we will reach and declare victory,” he says. “I see these ‘supremacy’ experiments more as a set of benchmarking experiments to help develop quantum devices.”

In any event, demonstrating quantum supremacy, says Pednault, “should not be misconstrued as the definitive moment when quantum computing will do something useful for economic and societal impact. There is still a lot of science and hard work to do.”

Which, of course, is just applied science as normal. The idea of quantum supremacy sets a nice theoretical puzzle, but says little about what quantum computers might ultimately do for society.