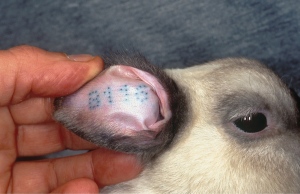 Ear tattoos are a common way to identify rabbits, but they may cause more pain than was thought.

Rabbits are the latest focus of work seeking to measure animal discomfort by assessing facial expressions.

Researchers working with animals often find it difficult to scientifically assess when their study subjects are in pain. Traditional methods rely on after-the-fact measurements involving weight loss or food and water consumption, or on subjective judgements such as how an animal moves. In an attempt to make pain assessment more scientific, geneticist Jeffrey Mogil at McGill University in Montreal, Canada, and his colleagues developed the 'mouse grimace scale', which was published in Nature Methods1 in May 2010 (see 'Mice pull pained expressions').

The scale relies on the scoring of five ‘action units’ — such as narrowing of the eyes and bulging of the cheeks — between zero (not present) and two (obviously present), with the combined score indicating total pain. The scale rapidly caught on among veterinarians to assess post-operative pain. “I’m surprised how quickly it was adopted as a practical thing to use in real-time for animal care,” says Mogil.

Matthew Leach, who researches animal welfare at Newcastle University, UK, and led the work in rabbits, has been working on facial expressions of pain in various animals since the original mouse grimace scale came out. "The only way you can alleviate pain is to be able to identify it, and to understand how much pain an animal is in," he says. "There is a broad interest in grimace scales,” he notes, adding that compared with traditional models, “I would argue it’s potentially better and faster in many circumstances”.

Leach's rabbit grimace scale, published today in PLoS One2, was prompted by the Swedish government, which wanted a way to assess how painful ear tattooing — a procedure commonly used to identify animals used in agriculture and breeding shows — is for rabbits.

The rabbit scale has significant overlap with the existing mouse and rat scales. It involves looking for changes in whisker movement, ear position, cheek bulging, nose bulging and narrowed eyes on a scale from zero to two. In the study of ear tattooing, the researchers were unable to use ear position, so the highest possible score was eight.

Scores for rabbits tattooed without anaesthetic averaged four after the procedure, whereas before treatment, after sham treatment and after treatment with a local anaesthetic scores averaged less than two. The results also reflected other measurements of stress — such as increased blood pressure and heart rate — during tattooing without anaesthetic. Leach says that in this case, a difference of two points is a significant result.

Penny Hawkins, deputy head of the department for research animals at the British charity the Royal Society for the Prevention of Cruelty to Animals, points out that once pain has been identified it can be treated, either by the application of painkillers or through indirect methods such as increasing the enrichment of animal cages, which is known to ease discomfort.

“I think the grimace scales have made a difference,” says Hawkins. “I think they’ve given people a real wake-up call regarding their ability to detect pain in animals.”