Rabbits with blocked windpipes have been kept alive for up to 15 minutes without a single breath, after researchers injected oxygen-filled microparticles into the animals' blood.

Oxygenating the blood by bypassing the lungs in this way could save the lives of people with impaired breathing or obstructed airways, says John Kheir, a cardiologist at the Children’s Hospital Boston in Massachusetts, who led the team. The results are published today in Science Translational Medicine1. 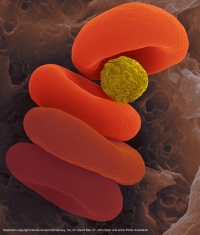 The technique has the potential to prevent cardiac arrest and brain injury induced by oxygen deprivation, and to avoid cerebral palsy resulting from a compromised fetal blood supply.

In the past, doctors have tried to treat low levels of oxygen in the blood, or hypoxaemia, and related conditions such as cyanosis, by injecting free oxygen gas directly into the bloodstream. They had varying degrees of success, says Kheir.

In the late nineteenth century, for example, US doctor John Harvey Kellogg experimented with oxygen enemas — an idea that has been revived in recent decades in the form of bowel infusers2, says Mervyn Singer, an intensive-care specialist at University College London.

But these methods can be dangerous, because the free oxygen gas can accumulate into larger bubbles and form potentially lethal blockages called pulmonary embolisms.

Injecting oxygen in liquid form would avoid this, but the procedure would have to be done at dangerously low temperatures. The microcapsules used by Kheir and his team get the best of both worlds: they consist of single-layer spherical shells of biological molecules called lipids, each surrounding a small bubble of oxygen gas. The gaseous oxygen is thus encapsulated and suspended in a liquid emulsion, so can't form larger bubbles.

The particles are injected directly into the bloodstream, where they mingle with circulating red blood cells. The oxygen diffuses into the cells within seconds of contact, says Kheir. “By the time the microparticles get to the lungs, the vast majority of the oxygen has been transferred to the red blood cells,” he says. This distinguishes these microcapsules from the various forms of artificial blood currently in use, which can carry oxygen around the body, but must still receive it from the lungs.

The lipid foam is safe, says Kheir. “As the oxygen leaves them, the shells buckle and fold, with the lipids breaking off,” he says. The body then reabsorbs the lipids.

Injected rabbits survived for up to 15 minutes without breathing, and had normal blood pressure and heart rate. They showed no indication of heart, lung or liver damage caused by oxygen deprivation, or of pulmonary embolisms.

The microcapsules are easy and cheap to make, says Kheir. They effectively self-assemble when the lipid components are exposed to intense sound waves in an oxygen environment — a process known as sonication.

It is a very sophisticated approach, says Singer. Heart–lung machines can also oxygenate the blood, he notes, as can extracorporeal membrane oxygenation, in which blood is pumped out of the body, oxygenated and then pumped back in. However, these techniques are more suited to surgery or longer-term life support, and would not be much use in emergency situations such as when someone’s windpipe became blocked, says Singer.

Kheir agrees, saying that one of the great advantages of the microparticle approach is the speed at which it works. He thinks that it might be possible to modify the technique to keep subjects alive for as much as 30 minutes, but doubts that it could be pushed much further. Because the microparticles do not recirculate, it would be necessary to continuously infuse fresh ones into the blood, and there are limits to how much extra fluid can be pumped into the bloodstream. “It’s not going to replace the lungs, it just replaces their function for a limited period of time,” says Kheir.