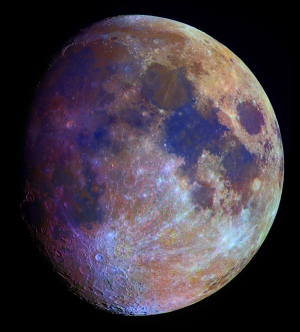 The Moon's ratio of titanium isotopes is more similar to that on Earth than expected.

A chemical analysis of lunar rocks may force scientists to revise the leading theory for the Moon's formation: that the satellite was born when a Mars-sized body smacked into the infant Earth some 4.5 billion years ago.

If that were the case, the Moon ought to bear the chemical signature of both Earth and its proposed 'second' parent. But a study published today in Nature Geoscience1 suggests that the Moon’s isotopic composition reflects only Earth's contribution.

Junjun Zhang at the University of Chicago in Illinois and her colleagues used a mass spectrometer to make the most precise measurement so far of the relative abundance of titanium-50 and titanium-47 in Moon rocks gathered by the Apollo missions in the 1970s. The authors report that the lunar ratio of the two isotopes is identical to that found in Earth’s mantle, within about 4 parts per million.

This presents a conundrum for the lunar-formation model, Zhang says, because any Mars-sized body that might have collided with the fledgling Earth is believed to have been chemically distinct. Studies of meteorites — the modern stand-ins for planet-sized bodies that once roamed the Solar System — indicate that such objects had an isotopic titanium abundance that could have deviated from the terrestrial value by as much as 600 parts per million. And because simulations suggest that the second body contributed more than 40% of the Moon’s bulk, the lunar isotopic ratio shouldn’t mirror the terrestrial value so closely.

Zhang and colleagues' chemical analysis is not the first to challenge the theory. Researchers have long known that the isotopic ratio of oxygen in Moon rocks bears the same signature as Earth’s mantle. But because oxygen is easily vaporized in a collision, it could have been readily exchanged between Earth and the cloud of vapor and magma that was produced by the impact and coalesced to form the moon, allowing both bodies to reach the same isotopic abundance. Titanium does not vaporize as easily and it would have been more difficult — although not impossible — for both bodies to have reached the same ratio, notes Zhang.

“That’s why this is not just another similarity between Earth and the Moon,” but a finding to be reckoned with, notes planetary scientist Robin Canup of the Southwest Research Institute in Boulder, Colorado.

Other models that merit consideration, Zhang says, include the fission model, according to which the Moon was spun out of Earth’s mantle early on, when the planet’s centrifugal force might have exceeded its gravitational force.

But Canup says that although the collision model may need revision, it need not be abandoned. She has modelled a collision between Earth and a renegade protoplanet about twice the mass of Mars — heavier than previously considered. A more massive second body would have substantially altered Earth's original isotopic composition, leading to a newborn Moon and evolving Earth that are more similar than in previous simulations.

Zhang agrees there are still ways for the collision model to work. If the fledgling Moon had cooled more slowly than assumed, there could have been enough time for an exchange of titanium isotopes between the cloud of vapour and magma and the Earth. In their most recent simulation of the moon's formation after a giant impact, Canup and her colleague Julien Salmon found evidence of a longer formation time. They presented the findings at the Lunar and Planetary Science Conference in The Woodlands, Texas, on 22 March2.

“Our study cannot provide a definite answer to the origin of the Moon yet,” says Zhang. “The message we hope to convey is that isotopic homogeneity between the Earth and Moon is a fundamental new constraint on the evolution of the Earth–Moon system.”