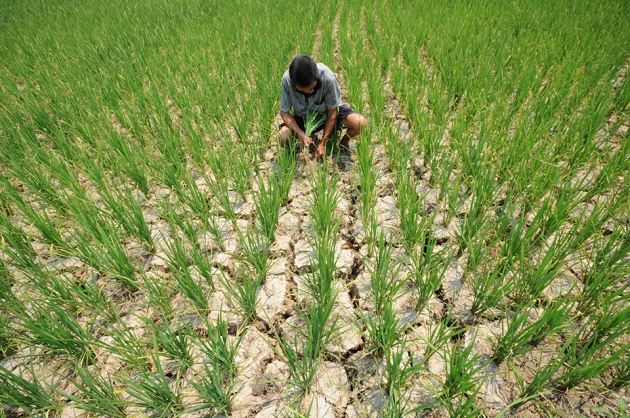 When Frank Untersmayr was growing up near Amstetten, Austria, he saw his father wait until the soil warmed up at the end of April to plant maize. “But the climate here has got a lot warmer since, so we can now often begin to sow before mid-April,” says Untersmayr, now 44 and a farmer himself. “That's good because it means that maize, which in our climate doesn't fully ripen, has two weeks longer to grow.”

But more changes are coming, which is why Untersmayr and half a dozen other farmers from the region gathered at the local chamber of agriculture on a rainy day in May. They met to talk to scientists about how increasing temperatures and shifts in precipitation might affect agriculture in their area — and how farmers might need to adapt.

Martin Schönhart, an agro-economist at the University of Natural Resources and Life Sciences in Vienna, presented preliminary forecasts for average agricultural yields in 2040. Some crops and fruit benefited from the amount of warming expected. But the yields of other crops — including maize — decreased by up to 20% because changes in precipitation and extreme weather events wiped out the benefits brought by warmer temperatures.

Hearing such negative projections, some farmers shook their heads in disbelief. “I would rather trust my own experience than any such forecast,” said Untersmayr.

His reaction reveals the communication gap that has long separated scientists from farmers in planning for climate change. “There is a deep divide between the science and its supposed end-users,” says Nora Mitterböck, who oversees climate-change adaptation policies at the Federal Austrian Ministry for Agriculture and the Environment in Vienna. “There is no lack of climate-impact research, but very little of it arrives on the farm. It's a sad situation that must absolutely change.”

Around the world, scientists, farmers, agricultural companies and governments are struggling to make agricultural systems more 'climate smart', which will be necessary if they are to feed the ever-swelling global population. Some are working in the short term to make today's farms more resilient. Others are looking further ahead to provide the information required for making major changes, such as investing in large irrigation systems.

Schönhart's work is part of a €14-million (US$15-million) programme called Modelling European Agriculture with Climate Change for Food Security (MACSUR), which aims to help European nations to prepare and adapt to climate change. Another international programme, the Agricultural Model Intercomparison and Improvement Project (AgMIP), is bringing together hundreds of researchers to inform policy-makers in developing countries, as well as agricultural extension agencies, which aid farmers.

Meetings such as the one in Amstetten are a key part of this work. For climate-adaptation programmes to succeed, researchers need to learn from farmers and agricultural officials what kind of information will help them the most, says Anne-Maree Dowd, a social scientist with the Commonwealth Scientific and Industrial Organisation in Kenmore, Australia.

“Scientists tend to think primarily in terms of publications as the main reward for their work,” she says. “When it comes to climate-change adaptation, they need to thoroughly switch their mindsets and first think about the overall practical goal of what they are doing.”

A new rice strain could ease methane emissions — and help to feed more people. Adam Levy finds out more about this climate-friendly crop.

Changing rainfall and temperature patterns will cause added stress for farmers, particularly in poorer countries, if heatwaves, droughts and extreme storms become more common, as is expected in many areas1. Agricultural forecasts are notoriously difficult because they face multiple tiers of uncertainty: in how climate will change regionally, in assumptions about what crops might be planted, in the availability of fertilizers and in economic projections. But last year, a comprehensive study2 that used multiple climate and agriculture models forecast that problems from climate change would generally outweigh the benefits for wheat and maize production in low-latitude regions, where developing countries are concentrated. Another study3 analysed 1,700 simulations and projected that without adaptation efforts, yields of maize, wheat and rice will decline in both temperate and tropical regions if temperatures rise by 2 °C.

One of the first steps towards building the agricultural systems of the future is helping farmers to deal with today's weather extremes. Crop developers, for example, are breeding varieties that can tolerate floods, droughts or increased salinity caused by rising sea levels. Millions of farmers in low-lying parts of India, Nepal and Bangladesh are now growing a rice variety developed by the International Rice Research Institute (IRRI) in Los Baños, Philippines, that can survive floodwaters better than traditional types of rice. Flood-tolerant varieties have raised yields of temporarily submerged fields by up to 45% and have helped to avert food shortages after major floods in southeast Asia, according to the IRRI.

Digital communication tools also provide opportunities to protect yields and safeguard farmers' incomes. An app developed by the IRRI allows regional agricultural offices to send farmers recommendations on when to apply fertilizers and when to harvest, based on weather and local soil conditions. In the first 6 months of 2015, the app sent 170,000 recommendations. Average yields for those who used the tool have increased by about half a metric tonne per hectare — almost 10%, says Matthew Morrell, head of research at the IRRI. Customized real-time advice is expected to become even more important as farmers try to keep up with new weather patterns.

Successful adaptation will also require bigger steps over the next few decades. In some regions, farmers might need to switch from irrigating crops to using semi-arid techniques, or might even have to abandon some land. Governments might choose to invest in expensive irrigation systems; in May, for example, Australia decided to fund projects totalling AUS$65 million (US$48 million) to irrigate the drought-struck Murray–Darling river basin, which produces one-third of the nation's food.

“Farmers seek to be profitable in the very near-term. From their perspective, 2040 is light years away.”

Most developed nations have already started planning for the long term by developing comprehensive adaptation strategies. Austria's scheme lists more than 130 measures to make the country's economy climate-fit. In the agricultural sector, the proposed measures range from diversifying crops to letting fields go fallow and reducing tillage of soil to fight erosion. But it has been a struggle to get farmers to implement some of these recommendations, says Mitterböck. “Farmers seek to be profitable in the very near-term. From their perspective, 2040 is light years away.” Successful adaptation in agriculture, she says, requires all relevant stakeholders to be involved in the scientific process so that farmers can get the information and incentives that they need.

Most climate impact and adaptation studies so far have failed to take into account the complexity of modern farming, says Holger Meinke, director of the Tasmanian Institute of Agriculture in Hobart, Australia. “Adaptation research must be a cross-cutting affair because hard-nosed decisions are never solely based on climate-change considerations.”

In Amstetten, farmers could not agree more. “We practise adaption all the time, but we mainly adapt to food prices and subsidy programmes and to modern machinery,” says Untersmayr. “And of course we must constantly adapt to the weather, no matter if the climate is changing or not.”

Governments and researchers are starting to listen. In Australia, scientists involved in a national climate-adaptation initiative are regularly consulting farmers about their problems with, for example, weed management, and how science might be able to solve them.

Developing nations have fewer resources to plan for the future, but AgMIP scientists are reaching out to farmers and stakeholders in 20 countries in Africa and South Asia. Launched in 2010, the €15-million programme is combining information drawn from climate projection and crop and economic models with empirical data collected in the field by 7 regional teams. To account for disagreements between models, AgMIP researchers aim to develop an optimistic and a pessimistic agricultural scenario for future conditions in each region. Over the next five years, they will advise local planners on how climate change may affect farmers in their region, and which social groups and farm types are most vulnerable. That will greatly help adaptation planning in poorer countries, says Dumisani Mbikwa Nyoni, an agricultural extension officer in Zimbabwe's Matabeleland North Province who took part in a meeting in June in Victoria Falls, Zimbabwe, with an AgMIP regional research team.

“Climate change is causing drought in our country,” he says. “So we need to identify crop varieties that can stand dryness and inadequate soil moisture, and we need to know what other options exist that will sustain our farmers. I hope science will help us do all that.” The information from AgMIP can also help officials in Zimbabwe decide where to put a planned 15,000 hectares of irrigation systems over the next 3–5 years, he says.

AgMIP is determined to provide the kind of information that will make a difference, says Cynthia Rosenzweig, a climate-impact researcher at the NASA Goddard Institute for Space Studies in New York City and a principal investigator of the project.

“It is utterly important that planners in each region and each locality will have all the knowledge in place that they need,” she says. “There are no dumb farmers, but farmers focus on present realities. We must leave no stone unturned to help them plan for a hotter future.”