A BBC headline last week, ‘First object teleported to Earth’s orbit’, has to be one of the most fantastical you’ll see this year. For once, it seems the future that science fiction promised has arrived! Or has it?

The article was talking about reports by Chinese scientists that they had transmitted the quantum state of a photon on Earth to another photon on a satellite in low Earth orbit, some 1,400 kilometres away1. That kind of transmission — first demonstrated in a laboratory 20 years ago2 — is known as quantum teleportation.

It’s a label that can mislead the unwary, as the BBC headline demonstrates. A write-up of the work in Discover reports that the scientists “have successfully transmitted quantum entangled particles” — only to clarify, confusingly, that “unlike science fiction teleportation devices, nothing physical is being transported”.

But wait: didn’t someone once say information is physical? That was physicist Rolf Landauer3, a pioneer of information theory. So if you send nothing physical, how can you transmit anything at all from A to B?

This is one of the deep issues that quantum physicists and philosophers still argue about. We can debate whether ‘quantum teleportation’ as a term is a catchy way of conveying a scientific idea, or a misleading bit of hype. But the real question — what, exactly, is transmitted during quantum teleportation, and how — touches on issues much more profound. 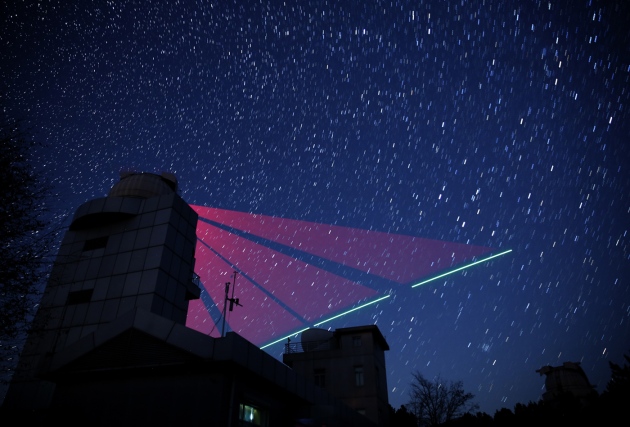 Chinese scientists 'teleported' a quantum state from a photon on the ground up to a satellite 1,400 kilometres away (composite photo).

If physicists Asher Peres and William Wootters had stuck to calling this quantum process ‘telepheresis’ when they first conceived of it in 19934, I doubt we’d be seeing headlines about it today. It was their co-author Charles Bennett who suggested instead ‘quantum teleportation’.

Whatever it’s called, the process transfers the quantum state of one particle onto another, identical particle, and at the same time erases the state in the original. This situation can’t be meaningfully distinguished from one in which the original particle itself has been moved to the target location: that transport has not really happened, but to all appearances it might as well have.

Crucially, however, this works even if you do not know what ‘information’ you are sending — that is, what the quantum state of the original particle actually is. That's important because making a measurement on an unknown quantum signal can disturb and alter it.

Teleportation of a quantum state uses the phenomenon of quantum entanglement as a means of transmission. When two or more particles are entangled, their quantum states are interdependent, no matter how far apart they are. In effect, they act as a single quantum object, described by a single wavefunction — the mathematical construct that encodes all the quantum properties of the object.

Quantum physics: What is really real?

The procedure begins by entangling a pair of particles to set up the quantum transmission channel. Particle A is held by the sender — call her Alice — and B is sent to the receiver, Bob. Because the particles are entangled and thus interdependent,  if Alice performs a physical operation on hers, that can be instantaneously reflected in the state of Bob’s. Alice also has another particle C: one whose quantum state she does not know, but wants to teleport onto B.

To perform the teleportation, Alice makes a special kind of measurement, called a Bell measurement, on particles A and C together. Crucially, this doesn’t tell her what state C is in. But because of the entanglement between A and B, it places B in a state that can be turned into whatever state C originally had, if Bob applies the right operation. By making her measurement, however, Alice has erased that state from C itself.

But what is the operation Bob needs to apply to complete the teleportation? He can deduce that from the outcome of Alice’s Bell measurement. She has to communicate that outcome to him by some classical means — e-mail, phone, carrier pigeon, whatever works. Once he gets it, Bob knows what to do to turn B into a form identical to the original C.

A common view is that quantum teleportation is a new way of transmitting information: a kind of high-speed quantum Wi-Fi. What’s amazing about it is that the quantum ‘information’ is ‘sent’ instantaneously — faster than light — because that is how two entangled particles communicate.

But isn't that supposed to be forbidden by Albert Einstein’s special theory of relativity. Yes — and that problem lay at the root of Einstein’s objections to the standard interpretation of what quantum entanglement entailed (he dubbed it “spooky action at a distance”). What special relativity actually prohibits is faster-than-light causal influence: an event in one place can’t have a physical, observable effect at another place in less time than it takes for light to travel between the sites. Quantum teleportation does not transmit any faster-than-light causal influence, because you also need the classical channel — limited to light speed at best — to complete the process.

It’s crucial that the teleported state is never actually copied. The fact that it is destroyed during the entanglement-enabled teleportation ensures that there is never a duplicate. The process thereby observes a fundamental principle in quantum mechanics, called no-cloning: it is impossible to make a copy of an arbitrary (unknown) quantum state5.

That prohibition causes problems related to handling errors in quantum computing, but also enables the technology called quantum cryptography, which makes it impossible to eavesdrop on a message encoded in quantum states without being detected6.

No-cloning is more than a technical complication of quantum information technology. Some researchers suspect that rather than being a consequence of the rules of quantum mechanics, it is in fact one of the deep principles — almost a fundamental axiom — that result in counter-intuitive quantum phenomena such as entanglement in the first place7.

Chinese satellite is one giant step for the quantum internet

So what exactly is being transmitted through entanglement alone?

This is a tricky question for quantum information theory in general: it is not obvious what ‘information’ means here. As with other colloquial words adopted by science, it is too easy to imagine we all know what we’re talking about. The 'stuff' transmitted by entanglement is neither information in the sense of Claude Shannon’s information theory (where it is quantified in terms of entropy, increasing as the 'message' gets more random), nor in the sense of an office memo (where information becomes meaningful only in the right context). Then what is it information about, exactly?

That issue, at the heart of quantum information theory, has not been resolved8, 9. Is it, for example, information about some underlying reality, or about the effects of our intervention in it? Information universal to all observers, or personal to each? And can it be meaningful to speak of quantum information as something that flows, like liquid in a pipe, from place to place? No one knows (despite what they might tell you). If we can answer these questions, we might be close finally to grasping what quantum mechanics means.

So the real marvel of what we call quantum teleportation is not so much what we can do with it as a technology, but what it reveals about the deep quantum structure of the world.

An earlier version of this story wrongly stated that quantum states can be teleported only if their content is unknown. In fact, this is not essential.