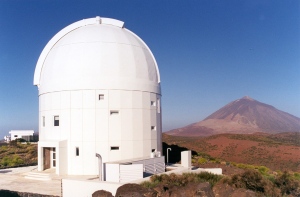 The European Space Agency's Optical Ground Station on Tenerife in the Canary Islands was used as a receiver in recent quantum teleportation experiments.

Two teams of researchers have extended the reach of quantum teleportation to unprecedented lengths, roughly equivalent to the distance between New York City and Philadelphia. But don’t expect teleportation stations to replace airports or train terminals — the teleportation scheme shifts only the quantum state of a single photon. And although part of the transfer happens instantaneously, the steps required to read out the teleported quantum state ensure that no information can be communicated faster than the speed of light.

Quantum teleportation relies on the phenomenon of entanglement, through which quantum particles share a fragile, invisible link across space. Two entangled photons, for instance, can have correlated, opposite polarization states — if one photon is vertically polarized, for instance, the other must be horizontally polarized. But, thanks to the intricacies of quantum mechanics, each photon’s specific polarization remains undecided until one of them is measured. At that instant the other photon’s polarization snaps into its opposing orientation, even if many kilometers have come between the entangled pair.

Because of the link between Alice and Bob forged by entanglement, Bob’s photon instantly feels the effect of the measurement made by Alice. Bob’s photon assumes the quantum state of Alice’s original photon, but in a sort of garbled form. Bob cannot recover the quantum state Alice wanted to teleport until he reverses that garbling by tweaking his photon in a way that depends on the outcome of Alice’s measurement. So he must await word from Alice about how to complete the teleportation — and that word cannot travel faster than the speed of light. That restriction ensures that teleported information obeys the cosmic speed limit.

Even though teleportation does not allow superluminal communication, it does provide a detour around another physics blockade known as the no-cloning theorem. That theorem states that one cannot perfectly copy a quantum object to, for instance, send a facsimile to another person. But teleportation does not create a copy per se — it simply shifts the quantum information from one place to another, destroying the original in the process.

Teleportation can also securely transmit quantum information even when Alice does not know where Bob is. Bob can take his entangled particle wherever he pleases, and Alice can broadcast her instructions for how to ungarble the teleported state over whatever conventional channels — radio waves, the Internet — she pleases. That information would be useless to an eavesdropper without an entangled link to Alice.

Physicists note that quantum entanglement and teleportation could one day form the backbone of quantum channels linking hypothetical quantum processors or enabling secure communications between distant parties. But for now the phenomenon of teleportation is in the gee-whiz exploratory phase, with various groups of physicists devising new tests to push the limits of what is experimentally possible.

In the August 9 issue of Nature, a Chinese group reports achieving quantum teleportation across Qinghai Lake in China, a distance of 97 kilometers. (Scientific American is part of Nature Publishing Group.) That distance surpasses the previous record, set by a group that included several of the same researchers, of 16 kilometers.

But a more recent study seems to have pushed the bar even higher. In a paper posted May 17 to the physics preprint Web site arXiv.org, just eight days after the Chinese group announced their achievement on the same Web site, a European and Canadian group claims to have teleported information from one of the Canary Islands to another, 143 kilometers away. That paper has not been peer-reviewed but comes from a very reputable research group.

Both teams of physicists faced serious experimental challenges — sending a single photon 100 kilometers and then plucking it out of the air is no easy task. In practical terms, both groups’ Alices and Bobs needed laser-locked telescopes for sending and receiving their photons, as well as complex optics for modifying and measuring the photons’ quantum states.

But that’s nothing compared to what the physicists have in mind for future experiments. Both research groups note that their work is a step toward future space-based teleportation, in which quantum information would be beamed from the ground to an orbiting satellite.