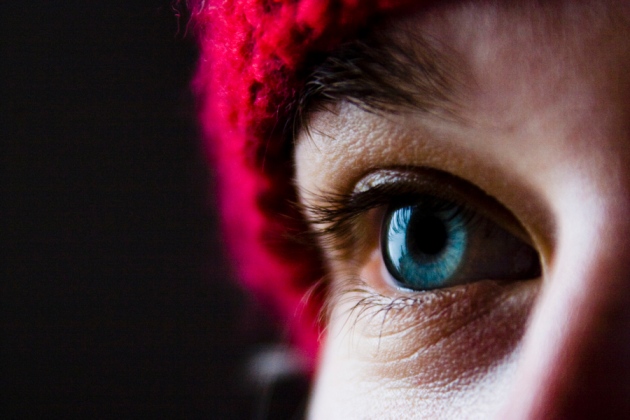 The human eye: a sensitive photon-detector.

An experiment to test the limits of human vision has provided the strongest evidence yet that our eyes can sense flashes of light as feeble as three photons.

The study, which involves firing photons into the eyes of people sitting in a dark room, could ultimately show whether people can sense single photons, according to Rebecca Holmes, a physicist from the University of Illinois at Urbana-Champaign. She presented her team's results at a meeting of the American Physical Society on 10 June in Columbus, Ohio. Holmes also hopes to test whether the human eye can register quantum effects, such as a photon being in two places at the same time.

Researchers have been trying since the 1940s to establish the smallest number of photons necessary for human perception. Rod cells in the retina — those that specialize in seeing shades of grey in dark conditions — are known to be exquisitely sensitive to light. Experiments on single rod cells taken from frogs1 have shown that the rods fire in response to single photons. But because the retina processes information to reduce noise from false alarms, the firing of one cell does not necessarily translate into a signal being sent to the brain, let alone to a person becoming aware of a flash of light. And more than 90% — perhaps as many as 97% — of photons that enter the eye never even reach a rod cell. They are absorbed or reflected by other parts of the eye, such as the cornea, so would not be detected.

Experiments have put the limits of human vision at between two and seven photons, Holmes says. But those conclusions were tentative as researchers never knew how many photons each flash of light contained: they could only estimate a range.

Holmes, however, took advantage of technology used in quantum-optics laboratories that can count exactly how many photons are in a flash of laser light. The method had never been used to test human vision before.

Holmes and her collaborators fired flashes containing various numbers of photons into the eyes of volunteers sitting in a dark room and staring at a cross-hairs target. They asked the participants to state whether the flash seemed to come from the left or from the right — even if they thought they saw nothing. “I’ve done it myself many times,” says Holmes, “and if you sit in the dark you can come out after an hour and say, ‘I’m not sure if I saw anything'.”

To test whether people could detect as few as three photons, the researchers sent flashes of 30 photons into the eye, expecting at most 10% of the photons, on average, to make it through to the retina. The volunteers guessed the flashes’ location more often than would have been expected by chance, making a statistically convincing case that they saw at least some three-photon flashes, Holmes says.

The results are the best evidence yet that humans can detect three photons, says Nicolas Gisin, a quantum-optics researcher at the University of Geneva in Switzerland who has seen the preliminary data, which have not yet been peer-reviewed.  Holmes adds that her team has not yet gathered enough data to say whether humans can see single photons.

To test quantum effects, typically only seen at microscopic scales, the team also wants to try sending one photon at a time into the eye, rather than 30, which could dramatically lower the odds of detection. To improve those odds, Holmes says, it might help to time the photons based on the volunteer's brainwaves, which are known to correlate with brief windows of increased attention, recurring around ten times per second. Holmes says she is practising using an electroencephalography (EEG) machine.

Gisin has pioneered experiments1 to see how the human eye responds to ‘quantum-weirdness’ effects. Although effects such as photons being in multiple places at once are well known, making humans part of the experiment “brings us closer to the quantum phenomenon”, he says.

Anthony Leggett, a Nobel Prize-winning theoretical physicist who is also at Urbana-Champaign and who inspired Holmes’s work, says that quantum weirdness should disappear somewhere between the scale of atoms and that of human bodies. “We don’t know at what stage it’s going to break down — or how." Holmes's study will probably validate standard interpretations of quantum physics, he says, which assume that a photon that is in a ‘superposition’ of two states will essentially choose one option when it comes into contact with a detector — whether that is an artificial photon counter or a rod cell.

But in principle, says physicist Angelo Bassi at the University of Trieste in Italy, each of the photon's personas could hit a rod cell, and that superposition could persist up to the brain. If so, there could even be “something like a superposition of two different perceptions, even if just for an instant”.