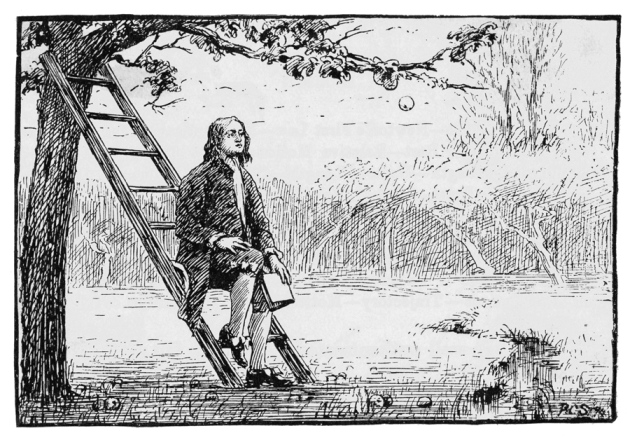 The gravitational attraction between any two objects, including Earth and Newton's proverbial apple, is proportional to their masses (and to the inverse-square of their distance) by a proportionality factor known as G. But measurements of this fundamental constant have given incompatible results.

Physicists have used the quantum nature of matter to obtain a highly precise value for the universal gravitational constant, the 'big G' that appears in Isaac Newton's law of how gravity pulls together everything, from planets to apples. Although the technique still needs refinements, physicists believe that in the future it will beat the precision of conventional methods — and hopefully solve apparent discrepancies between measurements that have long puzzled physicists.

Nature's Noah Baker asked Guglielmo Tino why the gravitational constant is so hard to measure.

In a study described today in Nature1, researchers measured the minuscule gravitational tug between rubidium atoms and a 516-kilogram array of tungsten cylinders. The uncertainty in the latest measurement is 150 parts per million, or 0.015% — only slightly larger than that of the conventional method of determining G, which is to quantify the mutual pull of two macroscopic masses.

The measurement is “a marvellous experimental achievement and an important contribution to the knowledge of G”, says Holger Müller, a physicist at the University of California, Berkeley, who was not involved in the study.

The technique, which exploits the ability of matter particles such as atoms to behave as waves, could provide fresh insight on a problem that has frustrated physicists for years. The conventional method measures the torque caused by gravitational attraction on the weights attached to a rotating balance, an experiment that was first conducted by English scientist Henry Cavendish in 1798. But despite the increasing precision of some 300 modern-day experiments using Cavendish's set-up, different labs have found slightly different values for G, and in recent years the discrepancy has widened rather than narrowed (see 'G-whizzes disagree over gravity'). 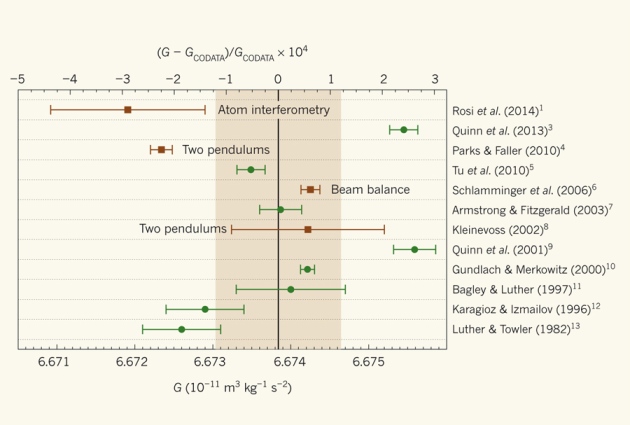 The new measurement is lower than most of the values obtained by traditional techniques (click to enlarge).

Researchers have been unable to identify the source of errors causing the disagreement in the conventional measurements. The set-up of the latest measurement is unlikely to contain the same errors as the torque method. And as its sensitivity improves it could help to pinpoint the true value of G, says study co-author Guglielmo Tino of the University of Florence in Italy.

Tino and his colleagues relied on an atom interferometer, a device that exploits the wave-like nature of matter, to precisely measure gravitational acceleration. Another team, led by Mark Kasevich at Stanford University in California, first demonstrated in 2007 that such an interferometer could measure G (ref. 2). Tino's team has “achieved a more than ten-fold improvement in measurement accuracy” of G with the interferometry technique, says Kasevich.

In the experiment described by Tino’s team, pulses of laser light tickle a cloud of rubidium atoms cooled to nearly absolute zero, driving the atoms to rise and fall like a fountain under the influence of gravity. The pulses split the 'matter wave' associated with each atom into a superposition of two energy states, each of which has a different velocity and reaches a different height — 60 or 90 centimetres — before falling back. The matter wave that rises farthest has a greater separation from the tungsten cylinders, and thus senses a slightly different gravitational pull. The difference in force imparts a measurable shift in the final state of the two matter waves when they recombine, creating an interference pattern.

The team used two atomic interferometers to cancel out the effects of Earth's gravity and of the tidal forces from the Moon and the Sun, which change with time. Because the masses of the atoms and cylinders and their separation distance are known to high accuracy, the researchers could tease out the value of G from multiple measurements of the clouds' accelerations.

Although the discrepancy between the different values of G might indicate an unknown or overlooked error in the torque method, it is also possible that Newton’s law of gravitation does not accurately describe the interaction of masses at the length scales of a lab, notes Peter Mohr, a physicist at the National Institute of Standards and Technology in Gaithersburg, Maryland. Having a new and independent way of measuring G could therefore enable physicists to redefine how the law of gravitation works.