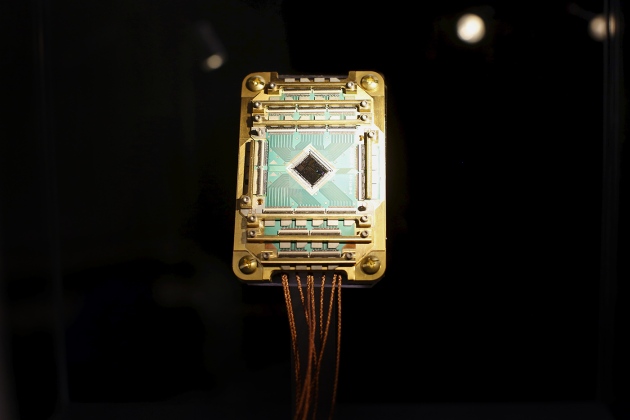 A quantum processing unit such as this might soon offer a more efficient way to detect rare particles.

A rudimentary quantum computer has rediscovered the Higgs boson. Sort of.

Physicists have been working hard to develop machines that can use quantum mechanical tricks to speed up computation. But they also hope that such quantum computers can return the favour and help them to discover new laws of nature.

Now, a team has shown that a quantum circuit can learn to sift through reams of data from atom-smashing experiments in search of a new particle. Their proof-of-principle study — performed using a machine built by quantum-computing company D-Wave working on the now-familiar case of the Higgs boson — does not yet provide a clear advantage over conventional techniques. But the authors say that quantum machine learning could make a difference in future experiments, when the amounts data will grow even larger. Their research was published on 18 October in Nature1.

Kyle Cranmer, a physicist at New York University who wasn't involved in the work, says that it’s refreshing to see a quantum machine applied to a practical physics problem — instead of the usual mathematical questions such as factoring whole numbers into primes. “Before this point, people were aware that this maybe some day will be relevant,” he says. “This makes it looks like maybe it is.”

In 2012, two experiments at the Large Hadron Collider (LHC) at CERN, Europe’s high-energy physics lab near Geneva, Switzerland, announced that they had proof of the existence of the Higgs boson, the last missing piece in the standard model of particle physics. The two experiments, called CMS and ATLAS, found evidence of the boson created in proton collisions from the way in which the Higgs decayed into more-common ones, such as pairs of high-energy photons. But each time the LHC collides two protons, hundreds of other particles are created, some of which can be misinterpreted as photons when they hit the detectors.

To help speed up their search for the Higgs, ATLAS and CMS physicists used simulated data to train machine-learning algorithms to tell wheat from chaff — photons from impostors.

More recently, particle physicist Maria Spiropulu, who helped lead the Higgs search at CMS, wanted to know whether a quantum computer could help to make the training process more efficient, in particular by reducing the amount of simulated data required to train the system. “I wanted to see if it can solve the Higgs problem, because I know the Higgs problem,” says Spiropulu, who is at the California Institute of Technology in Pasadena.

Her collaborator Alex Mott, a physicist who is now at DeepMind in London, translated the learning process into something that could be calculated by a ‘quantum annealing’ computer built by D-Wave, which is based in Burnaby, Canada. This type of machine finds the optimal solutions to certain problems by allowing superconducting loops, which encode quantum information, to fall into their lowest-energy state.

The idea was to have the quantum machine find the optimal criteria that an ordinary computer could then use to look for the photon signatures of the Higgs in real data. To test their theory, the team gained access to a D-Wave machine at the University of Southern California in Los Angeles. The experiment was successful, Spiropulu says: “We can train with small data sets and find the optimal solution.”

The researchers didn’t use those criteria to rediscover the Higgs — because they didn't need to. Showing that it is possible was “the coolest part” of their work, says Cranmer, who is a data-analysis specialist and helped lead the Higgs search in the ATLAS collaboration.

Don’t expect physicists to switch to quantum computers just yet: so far, the machine hasn’t performed better than a virtual version of itself that Spiropolu and her team ran on a conventional computer. And there is a long way to go to demonstrate that these techniques are more efficient than some existing machine-learning algorithms that are able to train on relatively small data sets, Cranmer says. Spiropulu agrees, adding that it will be necessary to test the various approaches against one another to see which is best.

But the results could have an impact in fields beyond physics. Davide Venturelli, a physicist working for the non-profit Universities Space Research Association and at the NASA Ames Research Center in Mountain View, California, manages a programme that makes a D-Wave machine at Ames (jointly run by Google and NASA) available to experimenters around the world. Researchers in fields ranging from Earth science to bioinformatics are interested in using quantum annealers, in particular for machine-learning applications, he says.

“The interesting thing is that this whole thing works,” Mott says.