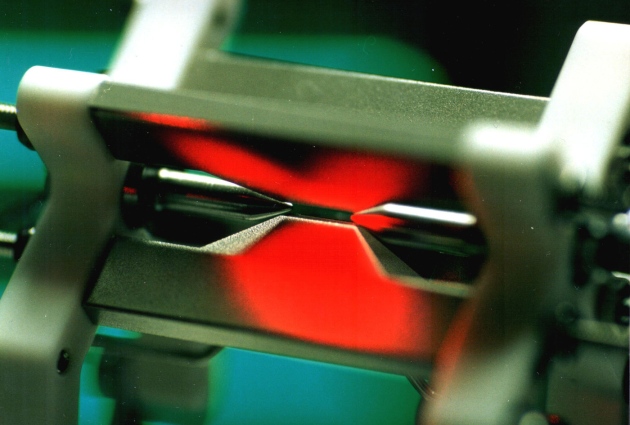 The trap researchers used to perform their quantum simulation.

Physicists have performed the first full simulation of a high-energy physics experiment — the creation of pairs of particles and their antiparticles — on a quantum computer1. If the team can scale it up, the technique promises access to calculations that would be too complex for an ordinary computer to deal with.

In some situations, however, the calculations are too hard to allow predictions from first principles. This is particularly true for phenomena that involve the strong nuclear force, which governs how quarks bind together into protons and neutrons and how these particles form atomic nuclei, says Christine Muschik, a theoretical physicist at the University of Innsbruck in Austria and a member of the simulation team.

Many researchers hope that future quantum computers will help to solve this problem. These machines, which are still in the earliest stages of development, exploit the physics of objects that can be in multiple states at once, encoding information in ‘qubits’, rather than in the on/off state of classical bits. A computer made of a handful of qubits can perform many calculations simultaneously, and can complete certain tasks exponentially faster than an ordinary computer.

Esteban Martinez, an experimental physicist at the University of Innsbruck, and his colleagues completed a proof of concept for a simulation of a high-energy physics experiment in which energy is converted into matter, creating an electron and its antiparticle, a positron.

The team used a tried-and-tested type of quantum computer in which an electromagnetic field traps four ions in a row, each one encoding a qubit, in a vacuum. They manipulated the ions’ spins — their magnetic orientations — using laser beams. This coaxed the ions to perform logic operations, the basic steps in any computer calculation.

After sequences of about 100 steps, each lasting a few milliseconds, the team looked at the state of the ions using a digital camera. Each of the four ions represented a location, two for particles and two for antiparticles, and the orientation of the ion revealed whether or not a particle or an antiparticle had been created at that location.

The team’s quantum calculations confirmed the predictions of a simplified version of quantum electrodynamics, the established theory of the electromagnetic force. “The stronger the field, the faster we can create particles and antiparticles,” Martinez says. He and his collaborators describe their results on 22 June in Nature1.

Four qubits constitute a rudimentary quantum computer; the fabled applications of future quantum computers, such as for breaking down huge numbers into prime factors, will require hundreds of qubits and complex error-correction codes. But for physical simulations, which can tolerate small margins of error, 30 to 40 qubits could already be useful, Martinez says.

John Chiaverini, a physicist who works on quantum computing at the Massachusetts Institute of Technology in Cambridge, says that the experiment might be difficult to scale up without significant modifications. The linear arrangement of ions in the trap, he says, is “particularly limiting for attacking problems of a reasonable scale”. Muschik says that her team is already making plans to use two-dimensional configurations of ions.

Are we there yet?

“We are not yet there where we can answer questions we can’t answer with classical computers,” Martinez says, “but this is a first step in that direction.” Quantum computers are not strictly necessary for understanding the electromagnetic force. However, the researchers hope to scale up their techniques so that they can simulate the strong nuclear force. This may take years, Muschik says, and will require not only breakthroughs in hardware, but also the development of new quantum algorithms.

These scaled-up quantum computers could help in understanding what happens during the high-speed collision of two atomic nuclei, for instance. Faced with such a problem, classical computer simulations just fall apart, says Andreas Kronfeld, a theoretical physicist who works on simulations of the strong nuclear force at the Fermi National Accelerator Laboratory (Fermilab) near Chicago, Illinois.

Another example, he says, is understanding neutron stars. Researchers think that these compact celestial objects consist of densely packed neutrons, but they’re not sure. They also don’t know the state of matter in which those neutrons would exist.