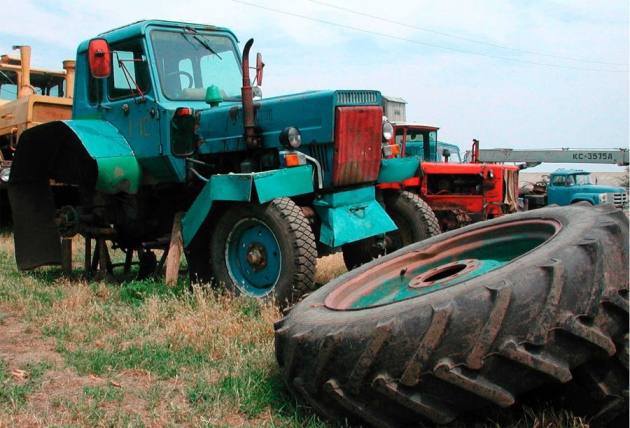 A Soviet-era tractor outside Privolnoye, a Russian town that has been hit hard by a decline in agriculture.

The Soviet Union’s collapse in 1991 heralded the end of many unprofitable communist industries, along with unprecedented changes in land use. As the free-market economy took hold, large swathes of Soviet cropland were abandoned by farmers and reclaimed by nature, causing a headache for today’s policy-makers. Should it be replanted to feed hungry mouths, or left wild to act as a substantial sink for polluting carbon dioxide?

The issue resurfaced this month after a study suggested that the area of cropland abandoned since 1990 in western Russia, Belarus and Ukraine has been severely underestimated. According to figures based on regional sowing statistics, more than one-quarter of former agricultural land in the region is idle. This equates to about 31 million hectares — or an area the size of Poland — and is more than three times the area estimated in 2009 by the United Nations Food and Agricultural Organization mainly on the basis of land-use observations from space.

Such satellite-derived land-cover maps can lack accuracy. So Florian Schierhorn, a geographer at the Leibniz Institute of Agricultural Development in Central and Eastern Europe in Halle, Germany, and his colleagues turned to annual sowing data to map changes in cropland at high spatial and temporal resolution (F. Schierhorn et al. Glob. Biogeochem. Cycles http://doi.org/qg8; 2013). Using these maps, they applied an algorithm — based on farming preferences such as soil quality — to decide which sites were most likely to have been cultivated in any given year. They validated their maps using remote-sensing data and images from Google Earth.

“The Soviet Union strived for complete agricultural self-sufficiency,” says Schierhorn, and this meant farming even low-quality land. He says that grain production in fertile regions is still substantial, but has dropped sharply in less fertile spots. This is mainly because, after 1990, there was a massive decrease in Soviet animal stock, so less need for animal feed, he adds.

Many sites once used to produce feed could today support wheat varieties and other cereals, Schierhorn says. If fully replanted, he estimates the region’s idle land could yield some 90 million tonnes of grain per year — about 35 million tonnes more than Russia’s wheat production in 2013. Recultivating only a portion of the land would buffer Russia against its notoriously erratic yields, Schierhorn adds. Ultimately, he says, it would help to satisfy the rising global demand for cereals for food and animal feed — projected to reach 3 billion tonnes by 2050.

The extent of abandonment in western Russia is not clear cut. Kirsten de Beurs, a geographer at the University of Oklahoma in Norman, has often visited the region, and says that some of Schierhorn’s data do not fully reflect what is happening on the ground. “We found lots of areas that struggled with abandonment but also a significant number of areas that were taken back into production,” she says.

But there is a catch in recultivating idle farmland, in that carbon locked in soils and plants on former agricultural land might be released into the atmosphere. Schierhorn’s study estimates, using vegetation modelling, that 470 million tonnes of carbon — which would equate to about one-third of US CO2 emissions in 2012 if released — have been sequestered between 1990 and 2009 in abandoned cropland in western Russia and Ukraine (see ‘Carbon goes wild’). 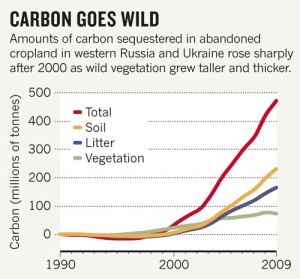 Wild vegetation is taking up carbon at a rate three times greater than previously estimated by some researchers, and the sink could become even more substantial as forests form, the team reports. Abandoned land, says Schierhorn, accounts for about one-third of the carbon sink provided by all forests in western Russia.

But such estimates are shrouded in uncertainty, says Nicolas Vuichard, an ecosystem researcher at the Laboratory of Climate and Environmental Sciences in Gif-sur-Yvette, France. In a 2008 study, he and his team calculated a carbon sink of about 8 million tonnes per year in abandoned cropland in Ukraine, Belarus and western Russia (N. Vuichard et al. Glob. Biogeochem. Cycles 22, GB4018; 2008).

“The strength of a carbon sink depends not only on current biological activity but also on former crop management practices such as fertilizer use,” says Vuichard.

Today, there are signs that abandoned sites in Russia are being replanted: areas sown for crops and cattle fodder have slightly increased in recent years. The trend is encouraging for food production, Schierhorn says — but a full reversal may not be desirable given the trade-offs.

Schierhorn estimates that some 10 million hectares could be recultivated without excess stress on water resources and soils. “The rest,” he says, “might better stay untouched.”