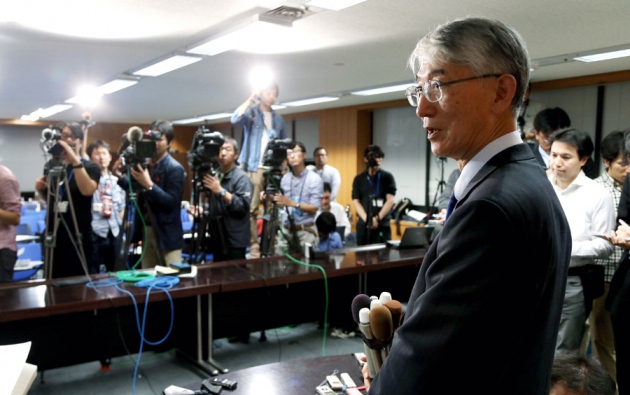 A team led by Kunihiko Shimazaki has raised serious concerns about the seismological threat to Japan’s nuclear reactors.

Plans to restart some of Japan’s 50 nuclear reactors, which have been idle since the Fukushima Daiichi disaster in March 2011, have hit an obstacle — and his name is Kunihiko Shimazaki. Buoyed by a new cabinet keen on nuclear power, the nuclear industry wants to get the plants back online to meet the country’s energy demands. But before it can do so, Shimazaki and a group of 16 other geophysicists working for the country’s Nuclear Regulation Authority (NRA) must confirm the industry’s claims that the plants do not face a serious earthquake threat.

To judge by his initial reports, Shimazaki won’t accept the claims lightly. On 28 January, Shimazaki, an NRA commissioner who warned in 2004 that Fukushima’s coast was more vulnerable to tsunamis than regulators had claimed, angered proponents of nuclear energy by reporting his group’s conclusion that there is probably an active fault under the Tsuruga nuclear plant, which was due to restart. If, as expected, the NRA endorses that finding, the plant won’t be allowed to operate.

But the team’s evaluations have been questioned, and not just by the nuclear industry. Seismologists dispute whether the faults that Shimazaki’s researchers are finding meet the NRA’s definition of ‘active’, meaning that they have generated an earthquake in the past 120,000 years or so. In some cases, say the critics, the fractures are not dangerous and some may not even be faults at all.

“They are being overly cautious just to avoid criticism,” says Koji Okumura, a palaeoseismologist at Hiroshima University who was on an expert subcommittee of the cabinet’s Nuclear Safety Commission until it was replaced by the NRA in September 2012. “They think they’re like Superman coming in to save us from the bad guys.”

Shimazaki’s team is evaluating five plants, comprising 12 reactors in total, plus the shuttered Monju experimental fast breeder reactor (see ‘Finding faults’). Four of the five plants are due to restart; at the fifth, two of the four reactors are already running. What the team is finding is often at odds with the industry’s assessment.

The Tsuruga plant’s reactors, for example, are 250 metres from a known fault. Excavations by the plant’s owner, the Japan Atomic Power Company, showed that the ground had shifted across the fault, suggesting that the fault had been active. But the company’s experts had concluded that the movement had happened before the 120,000-year threshold. 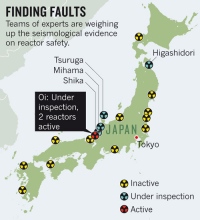 When Shimazaki’s experts examined the company’s trench, they found signs of more recent movement, and evidence that an extension of the fault runs directly beneath one of the reactors. “If you look at the displacement and slant, it looks like it’s a continuation” of a fracture running under the reactor, he says.

Problems also turned up in a survey by the Kansai Electric Power Company (KEPCO) of its Oi plant, which houses Japan’s only two running reactors. The plant is bisected by a fault, which KEPCO says is inactive. But Shimazaki says that crucial data from the original trench dug by KEPCO’s researchers are missing. And in December, Shimazaki announced that his group had found an active fault near the Higashidori plant, at which one reactor is idle, one is under construction and two more are planned. A full report is expected soon, but the Tohoku Electric Power Company, which operates the plant, says that it will produce data proving that the faults are not active. Meanwhile, surveys at the other two plants and the Monju reactor are set to begin this year. But critics are questioning the group’s methods.

Okumura says that some of what Shimazaki’s experts are citing as active faults could well be the result of landslides. He says the group lacks specialists on rocks and sediments — a limitation that the NRA says it has addressed by consulting the relevant experts.

Others are concerned that the group has been too quick to conclude that the fractures they have identified are dangerous. “There are fractures everywhere you look,” says Haruo Yamazaki, a seismotectonics researcher at Tokyo Metropolitan University. He says the debate should focus on what, if any, damage the reactors would suffer if the faults moved.

Shimazaki says that the NRA will weigh up the plants’ vulnerability to earthquake damage as it evaluates the seismology reports. But the plants will face more hurdles if regulations being drafted by the NRA become law without changes. Due to take effect in July, new requirements for vents and radiation filters could mean that the Oi reactors would have to be shut down immediately and others could not restart without modifications.