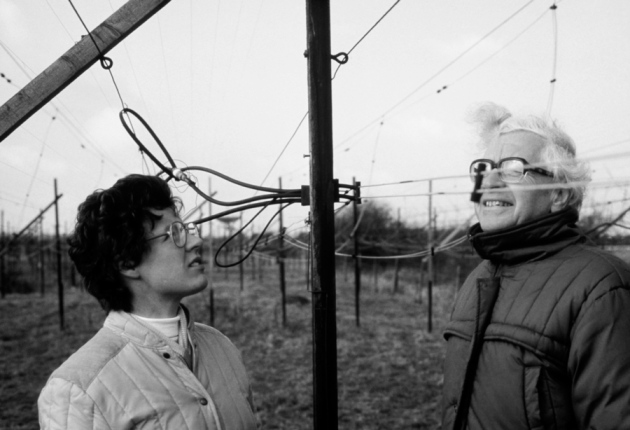 As scientists know only too well, nature often delivers a scruffier, more inconvenient version of reality than the one they wished for. But there are rare occasions when the Universe presents a real treat. One arrived 50 years ago, with the discovery of pulsars. In the decades since, these extremely precise ‘ticking’ stars have allowed astronomers to test gravity and explore deep space. They may yet form the Global Positioning System of the future.

Jocelyn Bell Burnell, the first person to detect a pulsar, said it emerged as a “bit of scruff” in the scribbled output from a hand-built radio array at the Mullard Radio Astronomy Observatory in Cambridge, UK. After two years of helping to build the array, the PhD student had started operating the equipment in July 1967, analysing 29 metres of chart recordings a day. The weeks that followed revealed spikes in the signal from a particular patch of sky; on closer inspection, these turned out to be repeated at precisely 1.3-second intervals. Three similar discoveries soon followed.

Bell Burnell realized the revolution that she and her supervisor Anthony Hewish had started only when a seminar to announce the results, ahead of their 1968 Nature publication (A. Hewish et al. Nature 217, 709–713; 1968), drew “every astronomer in Cambridge”. By the end of the year, the craze had gone worldwide, with astronomers finding dozens more such ‘pulsars’ and Austrian astrophysicist Thomas Gold offering an explanation: they were neutron stars, predicted in the 1930s but never before seen. If surrounded by powerful magnetic fields, he said, these extremely dense cores of exploded stars would create a column of radiation that would sweep past Earth like a lighthouse beam.

Pulsars are incredible objects: dead stars the size of a city, with more mass than the Sun and magnetic fields as much as 20 trillion times that of Earth, which spin at speeds of up to 70,000 kilometres a second. But astronomers immediately saw beyond pulsars’ status as objects of curiosity to their potential as cosmic probes.

The flashes of light they emit are as regular as a ticking clock. And the timing, polarization and shape of incoming signals give clues to the environment they were born in, as well as the journey they’ve been on. Since the 1960s, precision studies of pulsar light have allowed astronomers to study everything from the Sun’s corona, or outer atmosphere, to the density of matter in the interstellar medium.

Pulsars also provided a way to study gravity in extreme situations, when, in 1974, astronomers found one orbiting a fellow neutron star in a binary system. This celestial dance also yielded the first evidence of gravitational waves, when the rate at which the stars slowed in their orbit was found to match predictions from Einstein’s general theory of relativity about how such rapid, heavy objects should lose energy as they emit ripples in space-time. In 1992, precise measurements of bleeping radio waves from pulsar PSR1257+12 even revealed the first exoplanet.

“Pulsars are incredible objects: dead stars the size of a city, with more mass than the Sun.”

Today, astronomers have seen more than 2,000 pulsars, and the flow of ideas for how to use them has not slowed. Members of the Pulsar Timing Array collaboration hope to be able to use pulsars to detect gravitational waves directly, from the way in which the stretching and contracting of space-time subtly shifts the arrival time of pulses from sources across the sky. Studies of pulsars using NASA’s Neutron Star Interior Composition Explorer (NICER) should reveal how nuclear forces behave in extreme environments (see Nature 546, 18; 2017), and the same mission will test whether pulsars can be used to triangulate position in a navigation system that needs no contact with Earth.

Back in 1967, when Bell Burnell first saw the signal, and she and Hewish had ruled out Earth-based interference, they briefly considered that they might be seeing a message from an alien civilization. Even the thought stoked enormous press interest (and a new-found fame for Bell Burnell, which prompted bizarre questions from the press, such as how many boyfriends she’d had, and her height in relation to Princess Margaret, Queen Elizabeth II’s glamorous sister). Discovering extraterrestrial life would indeed have been momentous. But short of that, pulsars were just about the most exciting thing they could have found. And useful too. In other words, the Universe’s perfect gift.