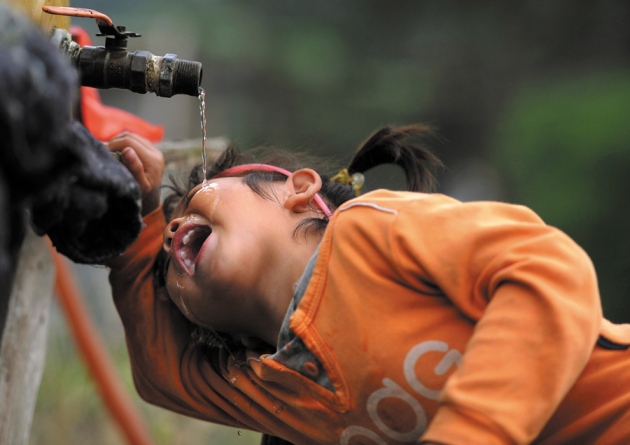 A girl drinks water from a tap in Anhui province, China.

Making drinking water safe is a priority in China. Serious health and social problems concentrate in areas where the water quality is poor. Every year, 190 million people in China fall ill and 60,000 people die from diseases caused by water pollution such as liver and gastric cancers1. Around 300 million people face shortages of drinking water2. In a 2009 nationwide assessment, one-quarter of 4,000 urban water-treatment plants surveyed did not comply with quality controls, stoking public fears about the health impacts.

The Chinese government is in the middle of a five-year 410-billion-renminbi (US$66-billion) programme to deliver safe drinking water to all town and city residents — about 54% of the population — by 2015. The focus is on upgrading 92,300 kilometres of mains pipes and thousands of water-treatment plants to developed-world standards.

But this infrastructure-focused approach is ill-suited to China, which is projected to remain a developing country until at least 2050. Urban expansion will outpace improvements to public water systems, and treating polluted water will require large amounts of energy, expensive technologies and chemicals.

Instead, the government should focus on cleaning water sources and recycling water. The first priority must be to purge rivers and lakes of industrial and agricultural pollutants, and to prevent these from entering the water table in the first place. Cheaper technologies at the point of use, such as purifiers on taps, would be enough to deliver clean drinking water to most of China's population, because drinking water accounts for only a few percent of total consumption (see 'China's water'). Water of lower quality can suffice for laundry, bathing and kitchen use.

In 2012, China mandated that tap water in all cities should meet a standard based on 106 indices called for by the World Health Organization. As well as investing in water treatment, distribution and quality monitoring, the government has added drinking-water safety to its list of 13 major technology projects, which include lunar-exploration and crewed space programmes. Billions have been spent on researching drinking-water problems in key river basins and lakes. But so far, only a few cities meet the desired standard.

It is a problem of supply and demand. Supply is a challenge because almost half of China's water sources are polluted. Wells and aquifers are contaminated with fertilizers and pesticide residues and heavy metals such as arsenic and manganese from mining, the petrochemical industry and domestic and industrial waste. More than three-quarters (76.8%) of 800 wells monitored in nine provinces, plus autonomous regions and municipalities, including Beijing, Shanghai and Guangzhou, failed to meet standards for groundwater in a 2011 national evaluation3. 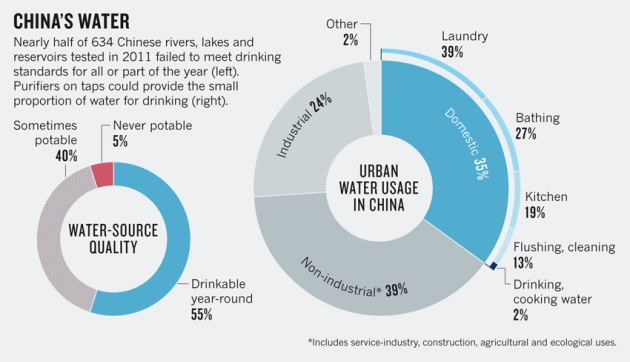 But take a closer look at how that water is used, and the problem becomes tractable. Almost two-thirds of municipal water is used by industry, agriculture and construction. Households consume the remaining third (365 million people used 15.3 billion tonnes of water in 2011). Of that, laundry, bathing and washing up take up most (together more than 80%). Cooking and drinking use just over 2% (1.1 billion tonnes). In other words, most household water need not be fit to drink.

Bringing a large developing country such as China up to the same standard as a developed country will require more-intensive water treatment. This has environmental consequences. In Jiangsu province, for example, carbon dioxide emissions increased by 28% in 2012 when a type of water filtration called ozone–biological activated carbon treatment was extended to one-quarter of the province's supply (5.3 million tonnes per day). China is in need of cheap, energy-efficient methods of water purification that minimize chemical use4.

Even if tap water becomes drinkable, few people will stop boiling drinking water, a habit that is ubiquitous in China. Boiling kills or deactivates all waterborne pathogens, including protozoan cysts such as cryptosporidium that can be resistant to chemical disinfection, and viruses such as rotavirus and norovirus that are too small to filter out5. Even if the water is turbid, boiling can remove microorganisms and volatile organic compounds such as benzene and chloroform.

In this context, purification systems that improve drinking water at the point of use are a good fit. In Kenya, Bolivia and Zambia, water purifiers have been shown6, 7 to reduce diarrhoeal disease by 30–40%. Fewer than 5% of Chinese homes currently have these, despite a unit costing only around 1,500 to 2,000 renminbi.

China's water-purification industry is growing by about 40% a year — fewer people are buying water dispensers and barrelled water. But water-purification devices are unregulated. Incomplete after-sales service leads to improper maintenance; delays in changing filter cartridges can introduce microorganisms. Filters and units made from toxic materials such as non-food-grade plastic are ineffective.

Treated grey water (waste water from showers and baths) and black water (from toilets) are increasingly used in China for industrial and irrigation purposes, and for flushing in new residences. But this type of recycling is impractical for most existing households, owing to the high cost and disruption of installing the necessary plumbing.

What next? By using cheap, low-carbon water purifiers in all homes, China can avoid the technology 'lock-in' that leads developed countries to waste potable water, and leap-frog to a sustainable supply system. In the long term, the improvement of water sources will ensure that most people have safe drinking water.

The local and national governance structures overseeing water supply and water-source pollution must be merged and an agency created to manage them — currently these are administered separately, by the Ministry of Housing and Urban-Rural Development, Ministry of Water Resources and the Ministry of Environmental Protection. Responsibilities need to be clearly defined.

Regulation and standards for water purifiers should be enforced. Business models for scaling up these technologies require investigation and testing of factors including the costs of production and implementation, pricing, subsidy and microfinance7.

As the Global Consultation on Safe Water and Sanitation for the 1990s8 put it, China's aim in supplying clean water should be: “Some for all rather than more for some”.