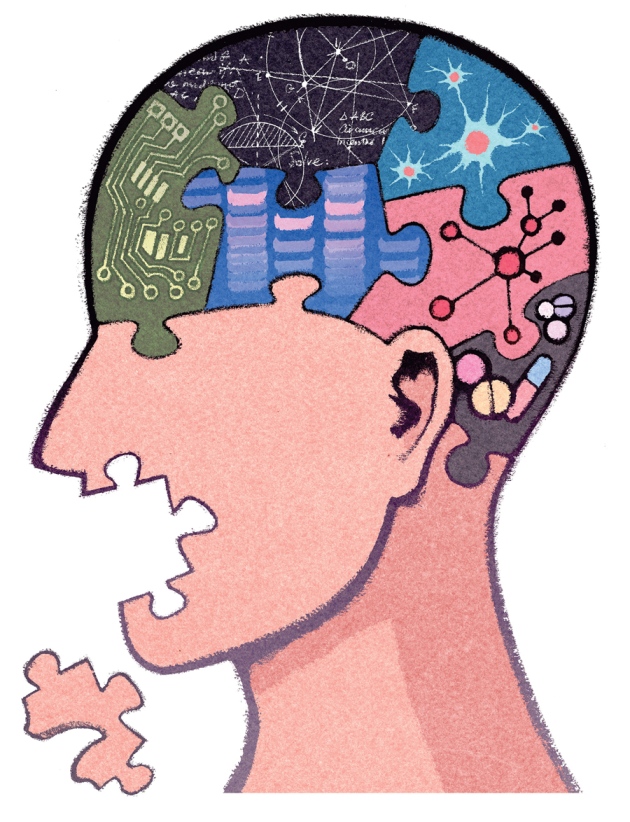 How does one human talking to another, as occurs in psychological therapy, bring about changes in brain activity and cure or ease mental disorders? We don't really know. We need to.

Mental-health conditions, such as post-traumatic stress disorder (PTSD), obsessive–compulsive disorder (OCD), eating disorders, schizophrenia and depression, affect one in four people worldwide. Depression is the third leading contributor to the global burden of disease, according to the World Health Organization. Psychological treatments have been subjected to hundreds of randomized clinical trials and hold the strongest evidence base for addressing many such conditions. These activities, techniques or strategies target behavioural, cognitive, social, emotional or environmental factors to improve mental or physical health or related functioning. Despite the time and effort involved, they are the treatment of choice for most people (see ‘Treating trauma with talk therapy’).

For example, eating disorders were previously considered intractable within our life time. They can now be addressed with a specific form of cognitive behavioural therapy (CBT)1 that targets attitudes to body shape and disturbances in eating habits. For depression, CBT can be as effective as antidepressant medication and provide benefits that are longer lasting2. There is also evidence that interpersonal psychotherapy (IPT) is effective for treating depression.

Ian was filling his car with petrol and was caught in the cross-fire of an armed robbery. His daughter was severely injured. For the following decade Ian suffered nightmares, intrusive memories, flashbacks of the trauma and was reluctant to drive — symptoms of post-traumatic stress disorder (PTSD).

Ian had twelve 90-minute sessions of trauma-focused cognitive behavioural therapy, the treatment with the strongest evidence-base for PTSD, which brings about improvement in about 75% of cases. As part of his therapy, Ian was asked to replay the traumatic memory vividly in his mind's eye. Ian also learned that by avoiding reminders of the trauma his memories remained easily triggered, creating a vicious cycle. Treatment focused on breaking this cycle by bringing back to his mind perceptual, emotional and cognitive details of the trauma memory.

After three months of treatment, Ian could remember the event without being overwhelmed with fear and guilt. The memory no longer flashed back involuntarily and his nightmares stopped. He began to drive again.

But evidence-based psychological treatments need improvement. Although the majority of patients benefit, only about half experience a clinically meaningful reduction in symptoms or full remission, at least for the most common conditions. For example, although response rates vary across studies, about 60% of individuals show significant improvement after CBT for OCD, but nearly 30% of those who begin therapy do not complete it3. And on average, more than 10% of those who have improved later relapse4. For some conditions, such as bipolar disorder, psychological treatments are not effective or are in their infancy.

Moreover, despite progress, we do not yet fully understand how psychological therapies work — or when they don't. Neuroscience is shedding light on how to modulate emotion and memory, habit and fear learning. But psychological understanding and treatments have, as yet, profited much too little from such developments.

It is time to use science to advance the psychological, not just the pharmaceutical, treatment of those with mental-health problems. Great strides can and must be made by focusing on concerns that are common to fields from psychology, psychiatry and pharmacology to genetics and molecular biology, neurology, neuroscience, cognitive and social sciences, computer science, and mathematics. Molecular and theoretical scientists need to engage with the challenges that face the clinical scientists who develop and deliver psychological treatments, and who evaluate their outcomes. And clinicians need to get involved in experimental science. Patients, mental-health-care providers and researchers of all stripes stand to benefit.

Interdisciplinary communication is a problem. Neuroscientists and clinical scientists meet infrequently, rarely work together, read different journals, and know relatively little of each other's needs and discoveries. This culture gap in the field of mental health has widened as brain science has exploded. Researchers in different disciplines no longer work in the same building, let alone the same department, eroding communication. Separate career paths in neuroscience, clinical psychology and psychiatry put the fields in competition for scarce funding.

Part of the problem is that for many people, psychological treatments still conjure up notions of couches and quasi-mystical experiences. That evidence-based psychological treatments target processes of learning, emotion regulation and habit formation is not clear to some neuroscientists and cell biologists. In our experience, many even challenge the idea of clinical psychology as a science and many are unaware of its evidence base. Equally, laboratory science can seem abstract and remote to clinicians working with patients with extreme emotional distress and behavioural dysfunction.

Research on psychological treatments is, in the words of this journal, “scandalously under-supported” (see Nature 489, 473–474; 2012). Mental-health disorders account for more than 15% of the disease burden in developed countries, more than all forms of cancer. Yet it has been estimated that the proportion of research funds spent on mental health is as low as 7% in North America and 2% in the European Union.

Within those slender mental-health budgets, psychological treatments receive a small slice — in the United Kingdom less than 15% of the government and charity funding for mental-health research, and in the United States the share of National Institute of Mental Health funding is estimated to be similar. Further research on psychological treatments has no funding stream analogous to investment in the pharmaceutical industry.

This Cinderella status contributes to the fact that evidence-based psychological treatments, such as CBT, IPT, behaviour therapy and family therapy, have not yet fully benefitted from the range of dramatic advances in the neuroscience related to emotion, behaviour and cognition. Meanwhile, much of neuroscience is unaware of the potential of psychological treatments. Fixing this will require at least three steps.

Uncover the mechanisms of existing psychological treatments. There is a very effective behavioural technique, for example, for phobias and anxiety disorders called exposure therapy. This protocol originated in the 1960s from the science of fear-extinction learning and involves designed experiences with feared stimuli. So an individual who fears that doorknobs are contaminated might be guided to handle doorknobs without performing their compulsive cleansing rituals. They learn that the feared stimulus (the doorknob) is not as harmful as anticipated; their fears are extinguished by the repeated presence of the conditional stimulus (the doorknobs) without safety behaviours (washing the doorknobs, for example) and without the unconditional stimulus (fatal illness, for example) that was previously signalled by touching the doorknob.

But in OCD, for instance, nearly half of the people who undergo exposure therapy do not benefit, and a significant minority relapse. One reason could be that extinction learning is fragile — vulnerable to factors such as failure to consolidate or generalize to new contexts. Increasingly, fear extinction is viewed5 as involving inhibitory pathways from a part of the brain called the ventromedial prefrontal cortex to the amygdala, regions of the brain involved in decision-making, suggesting molecular targets for extinction learning. For example, a team led by one of us (M.G.C.), a biobehavioural clinical scientist at the University of California, Los Angeles, is investigating the drug scopolamine (usually used for motion sickness and Parkinson's disease) to augment the generalization of extinction learning in exposure therapy across contexts. Others are trialling D-cycloserine (originally used as an antibiotic to treat tuberculosis) to enhance the response to exposure therapy6.

Another example illustrates the power of interdisciplinary research to explore cognitive mechanisms. CBT asserts that many clinical symptoms are produced and maintained by dysfunctional biases in how emotional information is selectively attended to, interpreted and then represented in memory. People who become so fearful and anxious about speaking to other people that they avoid eye contact and are unable to attend their children's school play or a job interview might notice only those people who seem to be looking at them strangely (negative attention bias), fuelling their anxiety about contact with others. A CBT therapist might ask a patient to practice attending to positive and benign faces, rather than negative ones.

In the past 15 years, researchers have discovered that computerized training can also modify cognitive biases7. For example, asking a patient (or a control participant) to repeatedly select the one smiling face from a crowd of frowning faces can induce a more positive attention bias. This approach enables researchers to do several things: test the degree to which a given cognitive bias produces clinical symptoms; focus on how treatments change biases; and explore ways to boost therapeutic effects.

“The amount spent on research into psychological treatments needs to be commensurate with their impact.”

One of us (E.A.H.) has shown with colleagues that computerized cognitive bias modification alters activity in the lateral prefrontal cortex8, part of the brain system that controls attention. Stimulating neural activity in this region electrically augments the computer training. Such game-type tools offer the possibility of scalable, 'therapist-free' therapy.

Optimize psychological treatments and generate new ones. Neuroscience is providing unprecedented information about processes that can result in, or relieve, dysfunctional behaviour. Such work is probing the flexibility of memory storage, the degree to which emotions and memories can be dissociated, and the selective neural pathways that seem to be crucial for highly specialized aspects of the emotional landscape and can be switched on and off experimentally. These advances can be translated to the clinical sphere.

For example, neuroscientists (including A.M.G.) have now used optogenetics to block9 and produce10 compulsive behaviour such as excessive grooming by targeting different parts of the orbitofrontal cortex. The work was inspired by clinical observations that OCD symptoms, in part, reflect an over-reaction to conditioned stimuli in the environment (the doorknobs in the earlier example). These experiments suggest that a compulsion, such as excessive grooming, can be made or broken in seconds through targeted manipulation of brain activity. Such experiments, and related work turning on and off 'normal' habits with light that manipulates individual cells (optogenetics), raise the tantalizing possibility of optimizing behavioural techniques to activate the brain circuitry in question.

Forge links between clinical and laboratory researchers. We propose an umbrella discipline of mental-health science that joins behavioural and neuroscience approaches to problems including improving psychological treatments. Many efforts are already being made, but we need to galvanize the next generation of clinical scientists and neuroscientists to interact by creating career opportunities that enable them to experience advanced methods in both.

Neuroscientists and clinical scientists could benefit enormously from national and international meetings. The psychological treatments conference convened by the mental-health charity MQ in London in December 2013 showed us that bringing these groups together can catalyse new ideas and opportunities for collaboration. (The editor-in-chief of this journal, Philip Campbell, is on the board of MQ.) Journals should welcome interdisciplinary efforts — their publication will make it easier for hiring committees, funders and philanthropists to appreciate the importance of such work.

By the end of 2015, representatives of the leading clinical and neuroscience bodies should meet to hammer out the ten most pressing research questions for psychological treatments. This list should be disseminated to granting agencies, scientists, clinicians and the public internationally.

Mental-health charities can help by urging national funding bodies to reconsider the proportion of their investments in mental health relative to other diseases. The amount spent on research into psychological treatments needs to be commensurate with their impact. There is enormous promise here. Psychological treatments are a lifeline to so many — and could be to so many more.