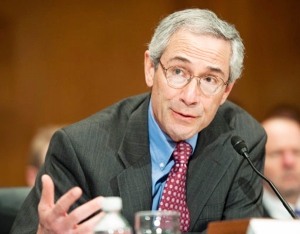 Thomas Insel wants mental-health research to move away from the Diagnostic and Statistical Manual of Mental Disorders (DSM).

Nassir Ghaemi, director of the Mood Disorders Program at Tufts Medical Center in Boston, Massachusetts, has felt shackled by the Diagnostic and Statistical Manual of Mental Disorders (DSM), often called the bible of psychiatry. Some of his depressed patients occasionally show manic behaviour but do not fulfil the DSM’s criteria for a diagnosis of bipolar disorder. Ghaemi is interested in whether such patients might respond better to drugs for bipolar disorder than for depression. But his colleagues warned him against straying from the DSM when he applied for funding at the US National Institute of Mental Health (NIMH), because peer reviewers tended to insist on research that hewed to DSM categories. Ghaemi held off from applying.

If NIMH director Thomas Insel has his way, Ghaemi and other mental-health researchers will no longer feel the weight of the DSM. “NIMH will be re-orienting its research away from DSM categories,” Insel wrote in a blog entry on 29 April. The latest edition, the DSM-5, will be unveiled on 22 May at the annual meeting of the American Psychiatric Association in San Francisco, California. Like many psychiatrists, Insel questions whether the DSM’s categories accurately reflect the way the brain works. He is pushing a project that aims to create a new framework that classifies mental-health disorders according to their biological roots. “Going forward, we will be supporting research projects that look across current categories — or sub-divide current categories — to begin to develop a better system,” Insel wrote.

The blog post made waves in the media and rattled some psychiatric clinicians and researchers. But Insel says that he has been talking about the issue since 2008. “The word was just still not out there,” he says. Insel says that he has increasingly received complaints from grant applicants who have tried to follow his guidance, only to be shot down by peer reviewers for eschewing DSM scripture.

Insel’s main concern is that DSM diagnoses are not based purely on science, but also take social, legal and historical factors into account. For example, Ghaemi says that the manual encourages diagnoses that can be treated with drugs thought to be safe, while discouraging diagnoses whose treatments carry heavy or unwanted side effects. Steven Hyman, a former NIMH director now at the Broad Institute in Cambridge, Massachusetts, blames DSM diagnoses for hampering research into the genetic basis for psychiatric illness. It is “a fool’s errand”, he says, to try to find a biomarker for a diagnosis with little basis in nature. “Such efforts have wasted human capital and [US National Institutes of Health] and industry funds for many years.”

The NIMH has been developing its new framework, called the Research Domain Criteria (RDoC), since 2009. The system replaces DSM diagnoses with broad research categories based on basic cognitive, behavioural and neural mechanisms. For example, the domain ‘negative valence’ includes categories such as fear, anxiety and loss. The framework calls for each category to be assessed on the basis of genetics, neural circuitry and behaviours, among others. “RDoC is not a diagnostic system,” says Charles Sanislow, a professor of psychiatry at Wesleyan University in Middletown, Connecticut, and a member of the NIMH RDoC working group. Instead, he says, it is a framework to guide research questions, organize findings and relate them to one another and psychiatric symptoms.

But even its staunchest supporters say that the RDoC is not a perfect solution. Ghaemi worries that its focus on biological mechanisms will underemphasize research on clinical symptoms. “The fact is, we have not yet tried to make a scientific diagnostic system based on clinical research,” he says, noting that the the DSM was never based strictly on research.

And some researchers aren’t sure how their work will fit in to the RDoC. Jane Costello, an epidemiologist at Duke University in Durham, North Carolina, studies irritability in children — a condition that crosses DSM categories such as paediatric depression, conduct disorder and anxiety. But she says that there is no place for her research among the current RDoC categories and that the framework leaves out “huge areas of psychopathology”.

Hyman has urged the NIMH to start thinking now about how the biomarkers that arise from RDoC research can be incorporated into the clinic, where the DSM's symptom-based approach will still reign supreme. “It would be very problematic for the research and clinical enterprises to wake up in a decade to a yawning gulf,” he says.

For now, Insel is uncertain whether his blog post will have a big impact on the scientific-review process at the NIMH. He notes that grant review at the National Institutes of Health, of which NIMH is part, is centralized, and individual institutes cannot directly address reviewers. As another solution, Insel is considering shifting funds away from broader research programmes and into dedicated RDoC grants. Last year, the NIMH, with a budget of just under US$1.5 billion, awarded seven such grants, totaling $5 million.

But Ghaemi says that it may take more than money before the RDoC gain currency. “It is very hard for people who have been following the DSM their entire professional lives to suddenly give it up,” he says. “It’s uncomfortable for a lot of people, but the field needs to be pushed — hard.”