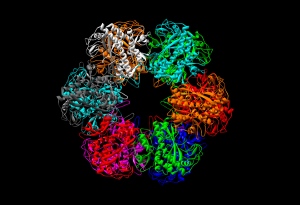 The 3-dimensional structure of a protein is intimately related to its function.

Proteins are an enormous molecular achievement: chains of amino acids that fold spontaneously into a precise conformation, time after time, optimized by evolution for their particular function. Yet given the exponential number of contortions possible for any chain of amino acids, dictating a sequence that will fold into a predictable structure has been a daunting task.

Now researchers report that they can do just that. By following a set of rules described in a paper published in Nature today1, a team from David Baker’s laboratory at the University of Washington in Seattle has designed five proteins from scratch that fold reliably into predicted conformations. In a blind test, the team showed that the synthesized proteins closely match the predicted structures.

“There’s really only one previous example of a protein that has been designed from scratch: that’s Top7 which we designed 10 years ago2,” said Baker, a computational structural biologist. “Top7 was sort of a one-off case,” he says. In the new work, the team presents a generalized approach.

“What you have now is a flexible set of building blocks for nanoscale assembly,” says Jeremy England, a molecular biophysicist at the Massachusetts Institute of Technology in Cambridge, who was not involved in the work.

The work was spearheaded by husband-and-wife team Nobuyasu Koga and Rie Tatsumi-Koga, protein engineers in Baker’s group. After observing the backbone structures of thousands of proteins, they developed some intuitive rules they wanted to test.

The Nature podcast team talks to David Baker about the home-made proteins.

Protein strands typically form helices and other classic secondary structures that in turn fold into the final protein shape. The team realized that these structures could be made to twist in one direction or another depending on the length of the loops that connected them. By choosing the right sequence lengths between these building blocks, the team could predict which way they would fold.

Using these and additional criteria, the team developed a number of candidate sequences designed to fold into one of five structures. They vetted these sequences using the group’s Rosetta@home program, which uses volunteers’ home computer power to run protein-folding simulations. Rosetta volunteers test-folded each sequence hundreds of thousands of times. About 10% of the sequences had predicted structures that were stable and matched what the team intended. The winning sequences did not match any known natural proteins.

Baker's proteins are in a sense “platonic ideals”, he says: simple backbone constructs with every amino acid optimized to fold into the prescribed, stable structure. In this way they differ from natural proteins, whose folded structures represent a compromise between the competing requirements of optimum folding and biological function, leading to “frustrated” parts of the sequence that may be essential for function but are destabilizing to the fold. As evidence of their stability, the designed proteins melt at about 100 °C, Koga says, compared to 40–50 °C for a natural protein.

Koga and Tatsumi-Koga confess that marital competition fuels their work. So far, Tatsumi-Kota is winning. She designed three of the five proteins that appear in the paper, says Koga.

One might wonder how designing a new protein from scratch could be better than starting with natural proteins, given the head start that nature has in evolving effective functions and stable conformations. In fact, evolution has honed the structures of many proteins so precisely that it can be difficult to get the backbone to budge into another conformation to accommodate a new function, Baker says. “This paper provides the opportunity to design the structure and function at the same time,” says Baker. “Rather than taking an already existing scaffold, now you can design a backbone to order for exactly the function you want to carry out.” That will be the next step — incorporating function into the designs.