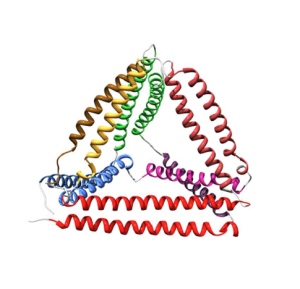 Practitioners of DNA origami have spent the better part of the past decade folding the molecule into minuscule smiley faces, boxes, letters of the alphabet and dozens of other intricate shapes.

Proteins, on the other hand, have been rather late in joining the origami party — even though nature is adept at moulding them into a dazzling array of functional shapes, including molecular-recognition systems and catalysts.

Now Roman Jerala, a biochemist at the National Institute of Chemistry in Ljubljana, Slovenia, is making up for lost time. He and his colleagues have designed and built a protein that folds itself into a tetrahedron — a pyramid with a triangular base — and he says that the strategy could be used to make a wide range of other shapes. Whereas examples of DNA origami often look pretty, few of these creations have any practical use. Proteins, on the other hand, are much better suited to performing useful tasks, such as delivering drugs, according to Jerala.

Proteins are long chains of amino acids folded into complicated shapes, and the precise sequence of these building blocks determines the overall structure of the folded molecule. One common structural element in proteins is the coiled coil, in which two or more helices of amino acids twist around each other like the strands of a rope. The helices stick together with the help of a mutual attraction between water-repelling (hydrophobic) amino acids, which run up the inside of the coiled coil.

Jerala reasoned that six coiled coils could be used as the edges of a tetrahedron. So his team worked out the amino-acid sequences of 12 different protein helices that each had unique patterns of hydrophobic regions along their length. This fingerprint ensured that each helix could pair with only one of the others in the set. 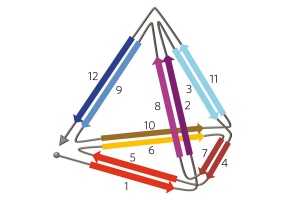 A schematic view of how the helical sections of the protein pair up by matching water-repelling amino acids.

Then the researchers joined the 12 helices into a chain, using flexible linkers of four amino acids to act like a hinge between each helix. Genetically modified Escherichia coli bacteria were drafted in to synthesize the protein, which — once purified — folded into tetrahedra measuring just 5 nanometres along each edge (see image above). “It’s a new protein fold that doesn’t exist in nature,” says Jerala. The work is published today in Nature Chemical Biology1.

"This type of assembly has been achieved before using DNA, but it has always been assumed that it would be much harder to do this with proteins because there is no straightforward code that relates sequence to structure, as there is with DNA,” says Dek Woolfson, a biochemist at the University of Bristol, UK.

Woolfson and his colleagues have recently joined coiled coils coming from distinct protein chains to build protein ‘cages’2, but he says that stringing all the components of the coiled coils into a single protein chain, as Jerala has done, is an exciting step because it offers a way to design and produce completely new protein shapes using reprogrammed bacteria.

Jerala says that attaching antibodies to the four vertices of his protein tetrahedron could enable it to target particular cells. Any drugs loaded inside could be released by breaking the tetrahedron apart — by means of a competing protein, a change in pH or a pulse of light hitting a photosensitive linker, he suggests.

Creating such a working system will take many years. For now, Jerala’s team is trying to double the size of the coiled coils in the tetrahedron, and thinking about making other shapes, such as prisms and bipyramids.