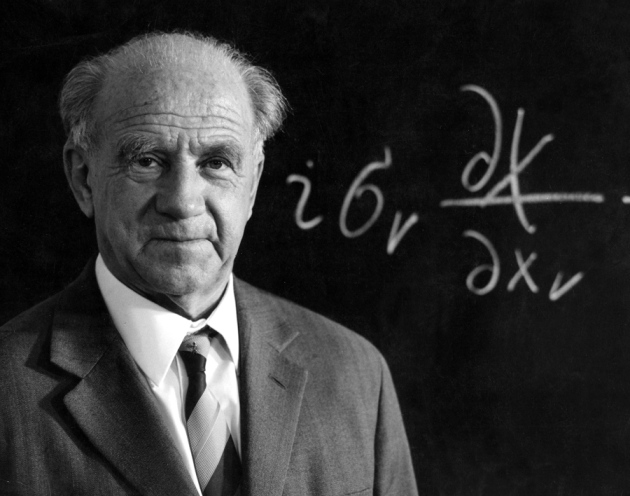 Werner Heisenberg’s concept of quantum uncertainty could now be on firmer ground.

Encapsulating the strangeness of quantum mechanics is a single mathematical expression. According to every undergraduate physics textbook, the uncertainty principle states that it is impossible to simultaneously know the exact position and momentum of a subatomic particle — the more precisely one knows the particle’s position at a given moment, the less precisely one can know the value of its momentum.

But the original version of the principle, put forward by physicist Werner Heisenberg in 1927, couches quantum indeterminism in a different way — as a fundamental limit to how well a detector can measure quantum properties. Heisenberg offered no direct proof for this version of his principle, and expressed his ideas “only informally and intuitively”, says physicist Jos Uffink of the University of Minnesota in Minneapolis.

Now researchers say that they have a formal proof. “Our work shows that you can’t measure something with an accuracy any better than the fundamental quantum uncertainty,” says Paul Busch, a theoretical physicist at the University of York, UK, who with his colleagues posted the proof on 6 June on the arXiv preprint server1. Not only does the work place this measurement aspect of the uncertainty principle on solid ground — something that researchers had started to question — but it also suggests that quantum-encrypted messages can be transmitted securely.

In their theoretical work, Busch and his colleagues imagined making simultaneous measurements of a particle’s position and momentum in an arbitrary quantum state. They compared the errors in such measurements to two special cases — in which either the position or the momentum of the particle is well known. They found that the combined errors in measurements of the position or momentum in these two cases obeyed Heisenberg’s principle and was always smaller than for cases in which the two properties were measured simultaneously. This step allowed them to prove Heisenberg’s original conjecture.

Busch and his co-authors’ work “is worth being remembered and maybe even taught through textbooks as the proper version of the Heisenberg error-disturbance relation”, says mathematician Hans Maassen of Radboud University in Nijmegen, the Netherlands. However, the proof has reignited a decade-long debate.

In 2003, physicist Masanao Ozawa, now at Nagoya University in Japan, proposed that the measurement-disturbance version of the Heisenberg uncertainty principle could be violated. Ozawa’s theory was published in 2004 (ref. 2) and was corroborated last year, when Aephraim Steinberg and Lee Rozema at the University of Toronto, Canada, and their colleagues reported the results of an experiment in which they measured the polarization of a single photon along two perpendicular directions3.

Just like position and momentum, quantum theory predicts that the polarization along two different axes cannot simultaneously be known with certainty (see Nature http://doi.org/m27; 2012). The team adopted a strategy in which the polarization is initially probed using a series of ‘weak’ measurements — detections that barely disturb the system but must be repeated several times to record the same information that a single ‘strong’ measurement can detect. They found that, on average, the polarization measurements disturbed the system by only about half as much as Heisenberg’s original formulation of the uncertainty principle dictates.

Ozawa says that Busch and his collaborators use the worst-case scenario, averaged over many quantum states, to define the disturbance caused by a measuring device. That may not reflect the actual conditions under which a particular quantum system in a particular quantum state is being examined. As a result, Ozawa says, the authors are overestimating measurement errors. But Busch and his colleagues argue that the definition of instrument error Ozawa uses is not universally valid, and therefore does not call into question Heisenberg’s principle.

The debate may sound esoteric, but quantifying by how much a measuring device can disturb the properties of a quantum system is crucial to the burgeoning field of quantum cryptography and computing. In principle, a quantum computer would be more secure than an ordinary computer because anyone trying to peer at the information would disturb it, leaving a telltale trace.

If Ozawa’s 2004 work holds up, it would mean that a thief might be able to steal quantum data without anyone knowing, as the furtive measurements might barely disturb the system at all.

But what Busch and his collaborators have proved, says Uffink, is that if an eavesdropper has no control over the state of the quantum system in question — as will typically be the case for a data thief — then the eavesdropper will necessarily disturb the system in the way that the original version of the uncertainty principle predicts. “This is an important result that we did not have before,” Uffink says.

Neither Uffink nor quantum theorist Howard Wiseman at Griffith University in Brisbane, Australia, are willing to say that Ozawa’s approach is wrong, however. Indeed, it is possible that both results are correct, Wiseman notes.

He suspects that a strange quantum concept known as negative probability — negative dips in the probability distribution of a particle’s location or momentum — could be at the heart of the issue. These dips may mean that a measuring device disturbs the system less than the uncertainty principle seems to allow. “The fact these two different definitions give you a different answer is telling you something about the weirdness of quantum mechanics,” says Wiseman.