When John Cardy proposed a far-reaching principle to constrain all possible theories of quantum particles and fields1, he expected it to be quickly rebutted. But for almost 25 years that hasn’t happened — and it now seems that his theorem may have been quietly proved earlier this year.

If the solution holds, it is likely to guide future attempts to explain physics beyond the current standard model. It will certainly have implications for any previously unknown particles that may be discovered at the Large Hadron Collider (LHC) at CERN, Europe’s particle physics lab near Geneva, Switzerland. 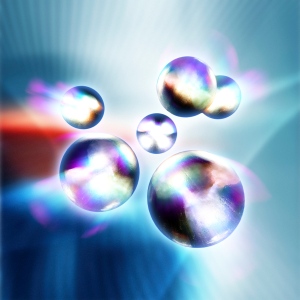 The a-theorem could help to explain the theory that describes quarks, fundamental particles seen here in a three-dimensional computer-generated simulation.

“I’m pleased if the proof turns out to be correct," says Cardy, a theoretical physicist at the University of Oxford, UK. “I’m quite amazed the conjecture I made in 1988 stood up.”

His conjecture is called the a-theorem. It says that the number of ways in which quantum fields can be energetically excited (a) is always greater at high energies than at low energies.

The proposed proof2, from theorists Zohar Komargodski and Adam Schwimmer of the Weizmann Institute of Science in Rehovot, Israel, was put forward in July 2011, and is now gradually gaining acceptance as other theoretical physicists have a chance to check it.

“I think it’s quite likely to be right,” says Nathan Seiberg, a theoretical physicist at the Institute of Advanced Study in Princeton, New Jersey.

Many quantum field theories have yet to be exactly solved, meaning that they cannot be used to produce comprehensive predictions of what particles will do. One example is quantum chromodynamics — the theory of the strong nuclear force that describes the interactions between quarks and gluons. That lack leaves physicists struggling to relate physics at the high-energy, short-distance scale of quarks to the physics at longer-distance, lower-energy scales, such as that of protons and neutrons.

Although lots of work has gone into relating short- and long-distance scales for particular quantum field theories, there are relatively few general principles that do this for all theories that can exist, says Robert Myers, a theoretical physicist at the Perimeter Institute in Waterloo, Canada.

But Cardy's a-theorem could be one such principle. A version of it had already been proven in two dimensions, but Cardy proposed that it might hold in four dimensions — such as the three dimensions of space and one of time that exist in the space in which we live. However, the theorem seemed to be have been killed off in 2008, when two physicists found a counter-example3: a quantum field theory that didn’t obey the rule.

Then, in 2010, Seiberg and his colleagues revisited the counter-example and found that it was flawed4. That set the stage for others to check Cardy's conjecture, and for Schwimmer and Komargodski to put forward their proof.

The proof is not perfect: parts of it require clarification and some steps need closer inspection. But Myers thinks that the proof is correct. “If this is a complete proof then this becomes a very powerful principle," he says. "If it isn’t, it’s still a general idea that holds most of the time.”

Ken Intriligator, a theoretical physicist at the University of California, San Diego, agrees, adding that whereas mathematicians require proofs to be watertight, physicists tend to be satisfied by proofs that seem mostly right, and intrigued by any avenues to be pursued in more depth.

Writing on his blog on 9 November, Matt Strassler, a theoretical physicist at Rutgers University in New Brunswick, New Jersey, described the proof as “striking” because the whole argument follows once one elegant technical idea has been established.

Now that the conjecture has some firm backing, it is likely to be applied more widely than before. The most fruitful territory will be the many quantum field theories that have been proposed to unify physics beyond the standard model, including supersymmetry, in which known particles are paired with extra-heavy counterparts that have yet to be found. The a-theorem would help because given predictions from a theory at low energy, it would constrain what the predictions at high energy should look like, and vice versa.

Physicists hope that the LHC will find evidence for supersymmetry or other particles beyond the standard model, and when that happens theorists will need all the help they can get to explain them. The a-theorem "will be a guiding tool for theorists trying to understand the physics”,  predicts Myers.

But Myers says that work should now proceed to prove a version of the theorem in odd numbers of dimensions. “I’m just hoping it won’t take another 20 years,” he says.