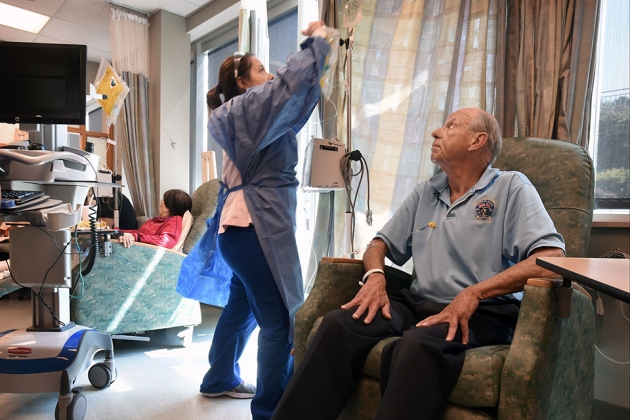 Immunotherapy offers hope to some people with hard-to-treat cancers — but it can backfire.

Powerful drugs that unleash the immune system hold the promise to wipe out cancer for some people with advanced disease. But two recent studies1, 2 suggest that these therapies, called PD-1 inhibitors, may backfire in some patients — speeding cancer’s spread. Now scientists want to find out why.

The latest studies are too small to justify a change in how physicians treat patients. But the research has prompted calls for bigger clinical trials to explore how immunotherapy drugs that are intended to rein in tumours could instead spur them on.

“With these small numbers, you’re always stuck being a little unsure,” says Elad Sharon, a cancer researcher at the US National Cancer Institute in Bethesda, Maryland. What’s needed, he says, is larger studies that make tumour images available for analysis by outside scientists. He would also like to see cancer researchers reach beyond their specialty. “What we should be doing probably is more cross-pollinating with other branches of medicine that look at the immune system,” he says.

Over the past five years, immunotherapies have revolutionized the treatment of some stubborn cancers. Although some of these treatments come with severe side effects, the unwanted effects of PD-1 inhibitors are relatively mild compared with those of many other cancer drugs.

This has led some physicians to give PD-1 inhibitors to people with cancer who have tried all other treatments -- even if the immunotherapy has not been shown definitively to work for their disease, says cancer researcher and physician Razelle Kurzrock of the University of California in San Diego. “Even if there’s a small chance of a response, the response itself can be so good,” she says. “We’ve developed the attitude: let’s go ahead and try it.”

But one day Kurzrock compared notes with a colleague and found that each of them had a patient whose tumours had grown unusually fast during treatment with PD-1 inhibitors. Her colleague came back a few days later and noted that the patients shared the same rare genetic alteration: extra copies of the cancer-driving genes MDM2 or MDM4.

Kurzrock began asking around, collecting anecdotes about people — and even about laboratory mice — whose tumours had advanced rapidly after treatment with an immunotherapy. Even after collecting examples from several sources, she felt nervous about releasing her results. “We thought, ‘Who’s going to publish this? They’re not going to believe us,’” she says.

Meanwhile, researchers at the Gustave Roussy Institute in Villejuif, France, had stumbled on the same problem. Charles Ferté, an oncologist at the institute, recalls attending a meeting in which several physicians reported bizarre responses to PD-1 treatment. “Some friends and colleagues were saying, ‘I treated lung patients with that drug and the tumour completely exploded in two weeks’,” says Ferté.

Ferté and his colleagues decided to launch a systematic study of tumour growth in their patients. Last November, they published their results: of 131 people who received anti-PD-1 therapies, 9% developed what the investigators called “hyperprogressive” disease, with accelerated tumour growth1. The phenomenon appeared to be more common in people over the age of 65.

On 28 March, Kurzrock and her colleagues published their data from 155 people treated with PD-1 inhibitors and other immunotherapies2. Six of the people had extra copies of MDM2 or MDM4 and 10 had mutations in a gene called EGFR, which is associated with cancer. The team did not see any correlation between age and rapidly worsening disease, but they did notice that tumours grew faster in four of those with the extra MDM2 or MDM4 genes, and in two of the people with EGFR mutations.

Both teams are still trying to understand how immunotherapy might backfire in cancer patients. Kurzrock speculates that the drugs could be unleashing proteins called “growth factors” that stimulate certain tumours. Sharon, who was not involved in either study, wonders if clues could be gleaned from research on the PD-1 protein’s effects on infectious diseases. Early studies found that blocking the protein could stimulate immune responses against some viruses, but suppressed responses to the mycobacterium that causes tuberculosis.

For now, Sharon says there is still not enough evidence to say for sure that the rapid tumour growth can be pinned on immunotherapy. The measures that Ferte’s team used to study tumour growth have not yet been widely tested for use in clinical studies, he notes. “What if this happens with other drugs as well, and we just weren’t looking for it?” he says. “I would like to see more evidence.”

Ferté agrees that the evidence against immunotherapy is not strong enough to warrant dramatic changes in how patients are treated. “I would still prescribe it for older patients,” he says. “But we will pay special attention.”