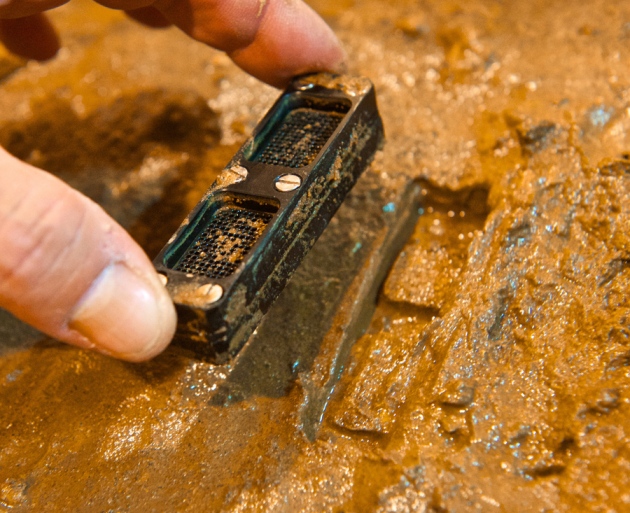 IChip device allows 'unculturable' bacteria to be studied for their ability to produce antibiotics.

An antibiotic with the ability to vanquish drug-resistant pathogens has been discovered — through a soil bacterium found just beneath the surface of a grassy field in Maine. Although the new antibiotic has yet to be tested in people, there are signs that pathogens will be slow to evolve resistance to it.

Today in Nature1, a team led by Kim Lewis of Northeastern University in Boston, Massachusetts, report that the antibiotic, which they have named teixobactin, was active against the deadly bacterium MRSA (methicillin-resistant Staphylococcus aureus) in mice, and a host of other pathogens in cell cultures. If the compound behaves similarly in people, it may prove to be a much-needed triumph in the war against antibiotic-resistance.

The device used to discover teixobactin is generating excitement also because it has the potential to reveal further undiscovered antibiotics: it enables 'unculturable' microbes to thrive in the lab, and so makes it easier to discover bacteria that naturally produce compounds deadly to other pathogens.

“The technology is very cool,” says Gerard Wright, a biochemist at McMaster University in Hamilton, Canada, who was not involved with the study. “Nobody knew if these bacteria produced anything useful.”

The news comes amid continuing warnings from public-health experts about the dangers of antibiotic resistance. In 2014, the World Health Organization declared that the post-antibiotic era — a time in which people could die from ordinary infections and minor injuries — could begin this century. MRSA has spread from hospitals into the community, and in 2013, there were 480,000 new cases of multi-drug-resistant tuberculosis worldwide, a condition that requires treatment with increasingly toxic drugs.

Many of the most successful antibiotics were found in the mid-twentieth century by scientists who trawled microbial communities for bacteria capable of killing their brethren. But the researchers missed the type that produces teixobactin, Eleftheria terrae, plus many other potential candidates — known collectively as microbial ‘dark matter’ — because of their reluctance to adapt to life on a petri dish.

Lewis and his Northeastern colleague Slava Epstein discovered E. terrae's potential with a device they call the iChip. It works by sorting individual bacterial cells harvested from soil into single chambers. The device is then buried back in the ground. Several molecules in that environment are able to diffuse into the iChip, allowing the bacteria to thrive in a more natural setting than a petri dish. Typically, only about 1% of microbes in a soil sample are able to grow in the lab. The iChip expands that fraction to 50%2.

The researchers then tested 10,000 of the resulting bacterial colonies to see whether any were able to halt the growth of S. aureus. That search yielded 25 potential antibiotics, says Lewis, but teixobactin is the most attractive candidate so far.

Listen to Kim Lewis talk about the antibiotic his team discovered.

Lewis is excited about teixobactin mainly because of the indication that it will be difficult for pathogens to develop resistance against it. Unusually for an antibiotic, teixobactin is thought to attack microbes by binding to fatty lipids that make up the bacterial cell wall, and it is difficult for a bacterium to alter such fundamental building blocks of the cell. By comparison, most antibiotics target proteins and it can be relatively easy for a microbe to become resistant to those drugs by accumulating mutations that alter the target protein’s shape.

It is impossible to say how well the results will hold up in the clinic, but teixobactin shows promise, says Wright. “I don’t believe there’s such a thing as an irresistible antibiotic,” he says. “But I do believe that certain antibiotics have a low frequency of resistance.”

As well as MRSA, Mycobacterium tuberculosis, which causes tuberculosis, was among the bacteria that teixobactin killed. But medical microbiologist Timothy Walsh of Cardiff University, UK, urges caution because the drug has been tested against only a small number of lab strains. It will be important to repeat those assays in dozens, if not hundreds, of strains more recently isolated from patients, he says.

Teixobactin has been tested in mice and has yet to show any toxic side effects, but demonstrating its safety in humans will be important, says Barry Eisenstein, senior vice-president of scientific affairs at Cubist Pharmaceuticals, a company in Lexington, Massachusetts, that specializes in antibiotic development. “Toxicity is still the leading cause of failure in turning a potential antibiotic drug into a real drug,” he says.

Even so, Eisenstein says that there is reason to be optimistic about teixobactin because it is rare to find a single molecule with so many promising properties.

But teixobactin has disappointed in its failure to kill ‘Gram-negative’ bacteria. This class, says Eisenstein, is a particular health concern and includes deadly pathogens such as Klebsiella pneumoniae, which has evolved resistance to all known antibiotics.

Walsh, however, is hopeful that the iChip technique will yield new solutions to the Gram-negative problem. “It could be that these iChip systems will grow bacteria that can actually produce new drugs to take out the very resistant and very pathogenic Gram-negative bacteria.”

About a decade ago, Cubist tried its hand at mining microbial dark matter, says Eisenstein. The company gave up the hunt because it was too labour-intensive, and mainly yielded compounds that had already been discovered. “Whether this iChip approach is going to ultimately turn out to be better is yet to be determined,” he says. “But they’re off to a great start.”