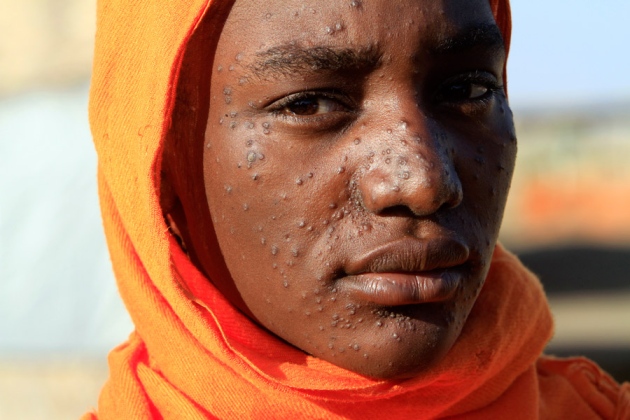 This woman’s rash is symptomatic of kala-azar, a parasitic disease spread by sandfly bites in the tropics.

Kala-azar, the most deadly parasitic disease after malaria, afflicts hundreds of thousands of the world’s poorest people in tropical countries such as India, Brazil and Sudan. Spread by sandfly bites, the disease can be fought with existing treatments — but these are expensive and inconvenient, and sometimes have toxic side effects.

Yet commercial work aimed at finding better drugs for kala-azar has largely been abandoned. Pharmaceutical companies say that poor customers cannot afford to pay the high prices needed to recoup development costs. Critics say that eight proposals, endorsed last month by reviewers for the World Health Organization (WHO) to break the stalemate for this and other neglected diseases, are noble, but no solution. The measures will do little, they say, to solve a broader problem: the disparity in spending on research and development for diseases of the rich and those of the poor.

The proposal to combat kala-azar (also known as visceral leishmaniasis, or VL) would combine groups already working on drugs for the disease into a single organization, the VL Global R&D & Access Initiative. This would seek to develop durable oral drugs that do not require cold storage or intravenous delivery. The non-profit plan will be considered by the WHO executive board at a meeting on 20–25 January at the organization’s headquarters in Geneva, Switzerland.

But critics are upset that novel and more risky ideas that would have helped to unlink the cost of drug development from prices were eschewed in favour of the eight shortlisted proposals, which were seen as more viable because they build on existing efforts and focus on specific diseases. “The proposals that were brought forward were not as strong as we had hoped in identifying alternative pathways to traditional research and development through commercial channels,” says Nils Daulaire, assistant secretary for global affairs at the US Department of Health and Human Services. “That was, frankly, disappointing.”

In response to this criticism, the WHO has asked the backers of the eight projects — five of which focus on developing vaccines or medicines for specific neglected diseases, one on fever diagnostics and two on basic research — to explain this month how they will test methods for funding the work. The responses will help the executive board to decide which projects to endorse. Then, at a World Health Assembly meeting in Geneva in May, countries will be asked to commit funds for the schemes.

The projects are part of an attempt to salvage a decade-long effort to create new funding mechanisms for neglected diseases. Despite campaigning from advocacy organizations such as the Drugs for Neglected Diseases Initiative in Geneva, and hefty donations from groups such as the Bill & Melinda Gates Foundation in Seattle, Washington, drug development is still disproportionately focused on diseases of the rich, such as heart disease and cancer.

Three times in the past decade, countries have failed to sign treaties that would commit them to fund drug development for neglected diseases. When the latest attempt was quashed in November 2012, diplomats agreed instead to back a series of demonstration projects that would test new funding mechanisms and be reviewed in 2016.

But critics worry that the eight shortlisted pilot projects are not actually testing new ways of funding, and that more innovative ones have been shelved. One proposal, rejected last month, would have used two tools — milestone payments and patent pools — to spur the development of tuberculosis medicines. Milestone payments would reward early-stage successes of potential drugs, such as proof of activity in humans. Recipients of the payments would then place intellectual property on these potential drugs into a patent pool. Drug developers could license these patents at low cost and would agree to put further patents back in the pool. Another rejected proposal involved taxing antibiotic use to fund the development of antimicrobials.

In their deliberations, reviewers were asked to score the projects’ public-health impact and scientific merit ahead of their novelty. Some neglected-disease advocates say that those priorities should have been reversed. Now that the more innovative projects have been dropped, “we’re not going to get to the place in two years’ time where we can say how well a completely different approach to research and development can work”, says Katy Athersuch, an advocate for affordable medicines with the non-profit organization Médecins Sans Frontières (also known as Doctors Without Borders), based in Geneva.

Paying for the projects in the traditional way — by garnering direct support from donor nations — may be difficult enough. A 2012 WHO report recommended that all countries spend 0.01% of their annual gross domestic product on neglected diseases, which would roughly double spending on these illnesses to US$6 billion per year. Only the United States is currently doing this, and emerging economies such as China, Brazil and India have yet to increase their spending.

If the WHO endorses some of the eight projects later this month, it will be a critical time to see if nations step up to pay for them, says John-Arne Roettingen, a global-health researcher at Harvard School of Public Health in Boston, Massachusetts. He says: “This will be the first test of whether countries are willing to put their money on the table.”