On the eve of a ballot that would dissolve his institution, Charles Emerson fell silent when asked how he would cast his vote. A combination of declining federal support and the economic downturn had left the Boston Biomedical Research Institute (BBRI) in debt. Frantic attempts to raise money — soliciting philanthropists, seeking partnerships with academic institutions, even renting out space in the BBRI building in Watertown, Massachusetts — barely made a dent. “I’m going to vote for dissolution,” the BBRI’s director finally said. “There is just no other way.”

On 15 November, members of the BBRI corporation agreed, voting 61–15 to end the institute’s 44-year history of biomedical research, which has included the study of vaccines for Alzheimer’s disease and the launch of a centre funded by the National Institutes of Health (NIH) to focus on a form of adult muscular dystrophy. Across the country, other independent labs fear a similar fate. “The BBRI could be a bellwether,” says Jonathan Chernoff, chief scientific officer of the Fox Chase Cancer Center in Philadelphia, Pennsylvania. “The same thing may befall other institutes, even the larger ones.”

Independent institutes tend to offer freedom from the teaching responsibilities and bureaucratic hassles that can burden researchers at a university or hospital. But they also lack revenue from tuition, or the administrative infrastructure and dedicated alumni that typically drive university fund-raising. “We have a nimbleness which you don’t get at a university,” says Chernoff. “But we little ships are in danger of sinking.”

Fox Chase ultimately sacrificed its independence to avoid a shipwreck. After struggling to recover from the 2008 economic crash, the institute was acquired in July by the Temple University Health System, also in Philadelphia, for US$83.8 million. “We’re still trying to deal with the outcome of this,” says Chernoff. “We don’t know how it will change our culture.”

Many biomedical-research institutes rely heavily on revenue from NIH grants to individual investigators. But NIH budgets have been declining since 2010, a trend that is unlikely to change any time soon. This proved fatal for the BBRI: as many researchers began to struggle to get their grants renewed, key grant winners retired or moved to other institutions. In 2010, the institute received $10 million in grants from the NIH — more than 80% of its budget that year (see ‘The case for a balanced portfolio’). By 2012, NIH grants had plummeted to $6.5 million. In July, Emerson saw projections that put the BBRI’s 2013 NIH revenue at around $3 million. It was then, he says, that he realized the institute was out of options. 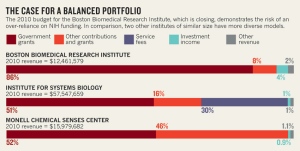 Like the BBRI, the La Jolla Institute for Allergy & Immunology in California gets about 80% of its budget from NIH grants. Chief technology officer Stephen Wilson says that the institute recognized the impending NIH funding crisis five years ago. Since then, it has cut non-essential staff. It now trains lab managers to use budgeting software, and even encourages employees to bring in coffee mugs rather than use paper cups. Like many institutes, it is also aggressively pursing philanthropic donations.

But philanthropy has its drawbacks. Many donors bristle at being asked to cover the ‘indirect’ costs of research: unglamorous background expenses such as utilities and administrative staff. Accepting a large donation that does not fully cover overheads can end up costing institutions money. “When a philanthropist gives us a million dollars but says ‘I’ll pay no indirect costs’, we have to have another sizeable pool of money to cover those expenditures,” says Sanders Williams, president of the Gladstone Institutes in San Francisco, California.

Collaborations with pharmaceutical and biotechnology firms are another funding route. The Monell Chemical Senses Center in Philadelphia has buttressed itself by building relationships with some 50 companies worldwide. The Institute for Systems Biology in Seattle, Washington, holds equity in start-up companies that it helps to launch. And the Buck Institute for Research on Aging in Novato, California, has spun out two companies from its research.

But industry money is no easy fix either, says Monell director Gary Beauchamp. “Industry groups are suffering cutbacks,” he says. “It’s a continual struggle to maintain those alliances.” Williams agrees. “We are facing the perfect storm. All of our revenue streams are challenged,” he says.

For Emerson and the BBRI, it is too late. Earlier this year, Emerson presented a final list of alternative funding schemes to the BBRI’s board. In the end, it concluded, there simply was not enough money in the institute’s $8.5-million endowment to tide it over and not enough time left for it to regroup. Emerson’s focus now is on helping faculty members to find placements at other institutions, and preparing for his own move to the University of Massachusetts Medical School in Worcester. “I didn’t want this to happen,” he says. “Now I just want to see that our scientists can carry on their work.”