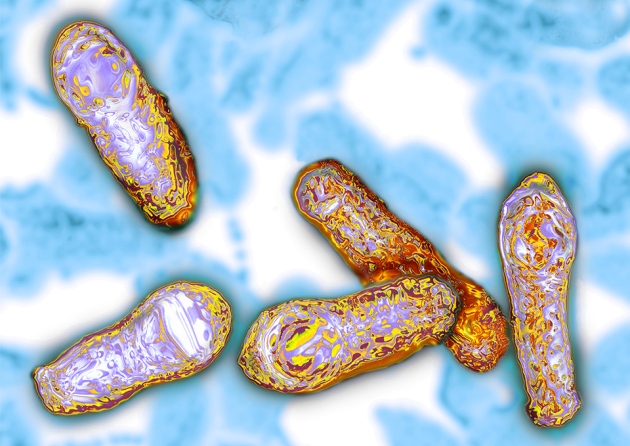 Clostridium botulinum harbours a protein that acts like a prion in other bacteria.

Prions, the infectious agents best known for causing degenerative brain disorders such as ‘mad cow’ disease, may have been spotted in bacteria.

A section of a protein in Clostridium botulinum, the microbe that causes botulism, can behave like a prion when it is inserted into yeast and Escherichia coli bacteria, researchers report in the 13 January issue of Science1.

Prions are formed by proteins that can fold in a number of structurally distinct ways. A prion version of a protein can perpetuate itself in an infectious manner by converting normal forms of that protein into the prion version.

Scientists first discovered prions in the 1980s as the agents behind fatal brain disorders known as transmissible spongiform encephalopathies. Since then, researchers have found the misfolded proteins in mammals, insects, worms, plants and fungi2, and learned that not all prions harm their hosts.

But until now, prions were only seen in the cells of eukaryotic organisms, a group that includes animals, plants and fungi.

Needle in a haystack

In the latest study, researchers analysed roughly 60,000 bacterial genomes using software trained to recognize prion-forming proteins in yeast. They focused on a section of the bacterial protein Rho. In many bacteria, such as C. botulinum and E. coli, Rho is a global regulator of gene expression, meaning that it can control the activity of many genes.

The researchers also found that although the normal version of Rho suppressed gene activity in E. coli, many genes were active when the protein was in its prion form. This suggests that prions might allow bacteria to adapt to certain kinds of environmental stresses, says Ann Hochschild, a bacterial geneticist at Harvard Medical School in Boston, Massachusetts, and a co-author of the study. For instance, the scientists found that E. coli modified with the prion version of Rho were better able to adapt to exposure to ethanol than could bacteria with normal Rho.

These findings suggest that prions predate the evolutionary split between eukaryotes and bacteria about 2.3 billion years ago. “Prions are likely to be much more widespread in nature than previously assumed,” Hochschild says. “We believe other prion-forming proteins will be uncovered in bacteria.”

Because prions are heritable, the findings suggest that these proteins could allow bacteria to inherit traits without the need for a genetic mutation. That could come in handy “when bacteria might need quick responses to their environment, such as dealing with antibiotics”, says Peter Chien, a bacterial biochemist at the University of Massachusetts Amherst.

The next step for researchers is to confirm that Rho can act like a prion in its natural host, Chien says. But that could be difficult, because C. botulinum is less tractable to genetic experiments than conventional lab organisms such as E. coli, Chien adds.

Developing the capability to experiment with prions in bacteria could help to reveal more about the behaviour of human prions, which may be linked to diseases such as Alzheimer’s and Parkinson’s, says Jeffrey Roberts, a molecular biologist at Cornell University in Ithaca, New York.