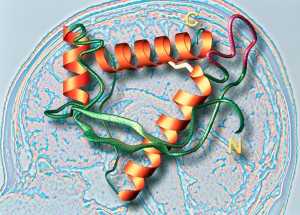 The prion proteins that can cause variant Creutzfeldt–Jakob disease in humans could be lurking undetected in our lymphatic system.

Prion diseases such as bovine spongiform encephalopathy (BSE) and variant Creutzfeldt–Jakob disease (vCJD) are able to jump species much more easily than previously thought. A study published in Science today shows that in mice, prions introduced from other species can replicate in the spleen without necessarily affecting the brain1.

The study reinforces the concern that thousands of people in the United Kingdom might be silent carriers of prion infection, potentially able to pass a lethal form of the disease to others through surgery or blood transfusions.

Prions are infectious pathogens, primarily composed of the misfolded form of a protein called PrP. Normal PrP molecules that are converted into the misshapen type then aggregate in the brain to form hard, insoluble clumps — with fatal consequences.

Previous studies have judged the ease of cross-species transmission by looking for clinical symptoms as well as the presence of prions in infected animals’ brains. Results from these studies suggested that in many cases there is an effective 'species barrier', with most inoculated animals seemingly free of prions at the end of their lives.

But prions don’t just replicate in the brain — they also affect lymphoid tissue, such as the spleen, tonsils and appendix. So Vincent Béringue, a prion researcher at the French National Institute for Agricultural Research in Jouy-en-Josas, France, and his colleagues used mice that had been genetically engineered to express either the sheep or human version of PrP to look beyond the brain.

The researchers injected prions from elk, hamsters and cattle into the brains of the engineered mice — all species barriers that are supposedly very hard to cross — then looked for prions in the spleens and brains of the mice at regular intervals after exposure.

As expected, few of the mice had detectable prions in their brains. When those expressing human PrP were inoculated with the BSE prion, only 3 out of 43 had detectable prions in their brains at the end of their lives. But in lymphoid tissue it was a different story, with 26 of 41 spleens testing positive for prions, even though the mice showed no clinical symptoms of BSE.

The research shows that prions jump species into lymphoid tissue much more easily than into brain tissue, says Béringue. “If you extrapolate that to the human situation, you can imagine that there are more people infected subclinically in lymphoid tissues such as the spleen, who may never develop the disease.”

That’s a concern because these carriers could infect others, for example by blood transfusion, organ donation or contaminated surgical instruments. Once passed human to human, the infection could in theory then affect the brain and cause lethal vCJD, says John Collinge, director of the Medical Research Council Prion Unit at University College London, who wrote an analysis to accompany the Béringue paper2. “The main adaptation — that the incoming BSE proteins have triggered the formation of human prions — has occurred,” he says.

An epidemic of BSE among cows, dubbed 'mad cow disease', in Britain in the 1980s, led to stringent controls on meat production and the use of surgical and dental instruments. Human cases of the disease, vCJD, were first seen in the mid-1990s. That sparked fears of a devastating human epidemic, but only around 200 people have died from the disease since then, and cases have been tailing off.

But two recent surveys of tissue samples from removed appendixes suggest that as many as 1 in 4,000 people in the United Kingdom could be carriers3, 4.

Béringue’s findings could help to explain these results, says Collinge. “These estimates suggest there may be 15 to 20,000 people in the United Kingdom incubating the disease,” he says. “Maybe they predominantly have an infection restricted to the lymphoreticular system.”

Collinge warns that “all efforts should be made” to assess the prevalence of prion infection in the United Kingdom by analysing surgical and autopsy tissues, and to investigate whether blood tests for vCJD can detect the infection in silent carriers. “Maybe they will never develop the disease themselves,” he says. “But it’s precisely those people who present a risk to others.”