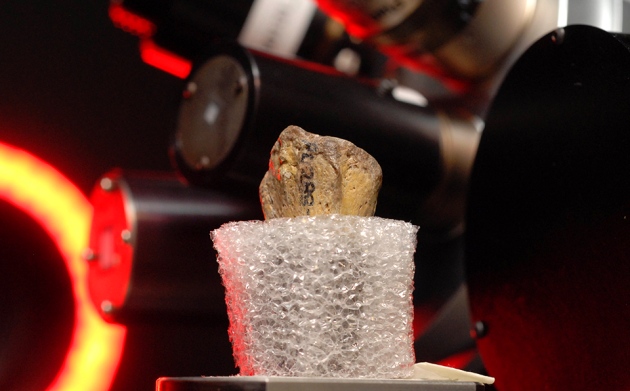 The world’s most famous fossil is now open source. 3D scans of Lucy — a 3.18-million-year-old hominin found in Ethiopia — were released on 29 August, allowing anyone to examine her arm, shoulder and knee bones and even make their own 3D-printed copies.

The scans accompany a Nature paper that argues that Lucy, a human relative belonging to the species Australopithecus afarensis, died after falling from a tree (J. Kappelman et al. Nature http://dx.doi.org/10.1038/nature19332; 2016). The team behind the paper also made the scans available to the public and is eager for other researchers to test the hypothesis by printing out the bones.

“It’s one thing for me to describe it in detail in paper, but it’s another thing to hold these things, to be able to print them out, look at them and put them together,” says team leader John Kappelman, a palaeoanthropologist at the University of Texas at Austin.

His team received approval from the National Museum of Ethiopia and the country’s government to make the models of Lucy public. “My sense from the Ethiopians is that Lucy is not only their national treasure, but they see her as a treasure for humankind,” says Kappelman, who hopes that the country will soon release digital scans of the rest of Lucy and that other countries may follow suit with other hominin fossils.

“Coming from Ethiopia, it really is a positive step, because other countries that are hesitant may be willing to do the same thing,” says Louise Leakey, a palaeontologist at Stony Brook University in New York.

But Kappelman and others say that such a move could threaten cash-strapped museums — many of them in Africa — that rely on income generated from casts of their fossil collections to help them survive.

Lucy’s digital debut was eight years in the making. Her 40%-complete remains spent 10 days in Kappelman’s lab in August 2008 during a US tour. His team worked day and night to scan every one of several hundred bone fragments using a computed-tomography (CT) imager.

Close examination revealed unusual fractures: the end of her right humerus that connected to her shoulder had a series of clean breaks and compressions similar to those that orthopaedic surgeons often see in people who attempt to break a fall with an outstretched arm. Damage to Lucy’s pelvis, left shoulder and knee and right ankle was also consistent with a fall from a great height. Kappelman’s team estimates that Lucy fell from a tree taller than 10 metres and died from her injuries, reaching a speed of up to 60 kilometres per hour at impact.

It’s unclear how suited Lucy was to arboreal life. She walked upright, but she may have held onto adaptations that helped her ancestors cope with trees — although that idea is hotly debated. Kappelman’s team proposes that Lucy would have slept in trees to avoid predators, yet was not as adroit there as her more-ape-like ancestors. “Here’s the most famous fossil on the planet, the centre of the debate over arborealism in human evolution, and we think it’s most likely she died from a fall out of tree,” he says.

But Marc Meyer, a palaeoanthropologist at Chaffey College in Rancho Cucamonga, California, who recently examined Lucy in Addis Ababa, is sceptical. Chimpanzees tend to break their spines when they fall from trees, says Meyer, and “Lucy’s spine does not come close to the amount of damage we would expect to see in a fatal fall”.

“The days of keeping this content squirrelled away are gone.”

Lucy’s discoverers noticed her broken bones when they found her, but proposed that this had occurred after she died. Donald Johanson, the palaeoanthropologist at Arizona State University in Tempe who found Lucy in 1974, still stands by that interpretation. Broken bones such as Lucy’s are common in other nearby remains, he notes.

Kappelman is keen for others to test their theory. Digital models of portions of Lucy’s left knee and right shoulder and arm are available at eLucy.org.

But although printed bones and virtual models can be helpful, Meyer says there is no substitute for seeing a fossil in person. He found stark differences between Ardipithecus ramidus, a 4.4-million-year-old hominin also found in Ethiopia, and a physical cast that he studied, including several deformities not captured in the cast.

Digital models of hominin fossils are rare, but a few are available. About 100 of the 1,500 remains ascribed to Homo naledi, uncovered in 2013 in a South African cave system, can be downloaded at MorphoSource.org, as can models of the 2-million-year-old Australopithecus sediba found by the same team in 2008.

AfricanFossils.org, which distributes digital models of hominin fossils for education and is headed by Leakey, contains numerous important specimens from Kenya. But the website’s models, although sufficient for 3D printing in many cases, are purposefully low in resolution, so as not to cut into income generated from making physical replicas.

Kappelman would like to see such revenue streams maintained, for instance by making lower-quality models free while charging researchers for good digital reproductions. “What has to be done is to put together a good business model that allows these museums to be able to have some sort of revenue stream off of these data,” he says.

Leakey, however, thinks that charging researchers will further limit access. She also points out that digital models can easily be pirated. “The days of keeping this content squirrelled away are gone,” she says. “Once you make a 3D model available, to control it is impossible.”