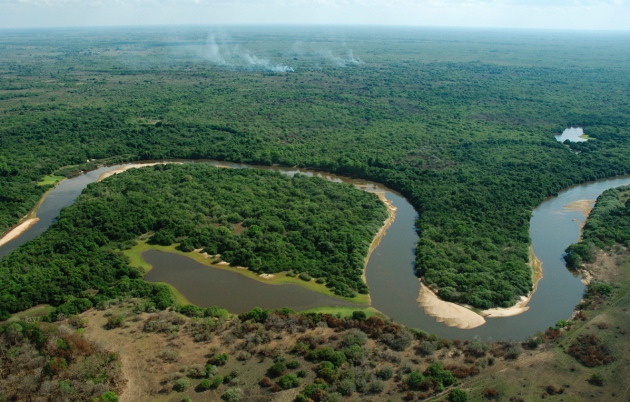 Revisions to Brazil’s forest code could open the door to more deforestation along the nation’s rivers.

Although Rousseff denied environmentalists’ push for a full veto, she removed many of the bill’s contentious provisions, including one that would have effectively granted an amnesty for any illegal deforestation conducted before July 2008. She also issued an executive order to fill in the gaps created by her veto. Rousseff and her ministers defended their decision as a realistic compromise that promotes agriculture but also protects the environment. Many expect further legislative wrangling as Congress reviews the new language in the coming months.

The revised code still requires that land­owners maintain a proportion of their land as forest, ranging from 20% for those in coastal regions to 80% in the Amazon. Rousseff restored obligations for landowners to restore forests that were cut down illegally, although she created exemptions that could relieve numerous small properties of this obligation.

Rules about riparian areas are another sore point. Whereas the old forest code required landowners to maintain corridors of riverbank forest 30–500 metres wide, depending on the size of the waterway, the revised law and presidential order reduce those requirements to just 5–100 metres. They also eliminate protections for steep slopes and allow landowners to meet some of their obligations to restore forest with permanent plantations of exotic trees, such as eucalyptus and oil palm.

Brazil’s Congress has until September to overturn Rousseff’s vetoes with a simple majority of both houses, and the president’s executive order will expire in late July unless approved by Congress. The two sides are bracing for another battle as the reviews move forward.

The politicized dispute is precisely what Brazil’s leading scientific institutions were trying to avoid when they pushed for a temporary truce between conservation groups and rural landowners last year. Government enforcement has helped to reduce the rate of illegal deforestation dramatically since 2004, but it has also sparked a push-back from politicians in Congress representing agricultural interests. The Brazilian Academy of Sciences and the Brazilian Society for the Advancement of Science wanted time to identify a compromise that might garner support from both sides, but that idea foundered as positions hardened.

“We proposed a moratorium of two years to study the issue,” says Luiz Martinelli, an ecologist at the University of São Paulo in Brazil who helped to organize an October 2011 position paper on forest-code reform. “Now we are in the middle of this mess, and I don’t think it is going to end soon.”

Environmentalists have generally criticized Rousseff’s decision, but Dan Nepstad, a California-based ecologist with the Brazilian Amazon Environmental Research Institute, says that the revised code does not necessarily spell doom for the Amazon. Various agriculture and forestry initiatives at the state, national and international levels could help to maintain progress in reducing deforestation. The question, Nepstad says, is whether the new code will clarify rules for landowners and enforcement agencies or whether it will sow doubts and ambiguities that may undercut compliance.

For many, there is a sense that politics has got in the way of real reform. “We should have had legislation that gives economic incentives to farmers to recover their forests and manage their land in a sustainable way,” says Adriana Ramos, executive secretary of the non-profit Socioenvironmental Institute in Brasilia. “We lost an opportunity.”