What are biologists so afraid of? Physicists, mathematicians and social scientists routinely post their research to preprint servers such as arXiv.org before publication, yet few life scientists follow suit.

A website that goes live this week is hoping to change that. The site, bioRχiv.org, launched by Cold Spring Harbor Laboratory Press in New York, bills itself as “the preprint server for biology”. It will operate similarly to arXiv, with scientists depositing papers as soon as they are ready to share them, weeks or months before formal publication.

The site’s launch comes as biologists begin to embrace preprints (see Nature 488,19; 2012). ArXiv’s quantitative biology section, launched in 2003, has seen exponential gains in the past two years (see ‘Life sciences freed’). It is on target to attract more than 1,500 manuscripts this year, says Paul Ginsparg, a physicist at Cornell University in Ithaca, New York, who started arXiv in 1991 and serves on bioRχiv’s advisory board. Meanwhile, the open-access journal PeerJ launched its own biology preprint server in April and has drawn some 90 submissions so far.

Geneticists in particular have flocked to arXiv’s quantitative-biology repository, and papers posted there on topics such as the genetic ancestry of southern Africans and Europeans have gone on to be published in prominent journals like Nature Communications and PLoS Biology. Scientists studying infectious diseases have also used the site to rapidly report on ongoing outbreaks, such as the H7N9 influenza infections in China in early 2013. 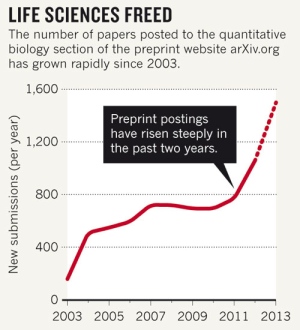 But arXiv does not plan to expand into other areas of the life sciences, such as cell and molecular biology, and the site is not designed with biologists in mind. Richard Sever, who founded bioRχiv with colleague John Inglis at Cold Spring Harbor Laboratory Press, says: “This is not something that is competing with arXiv. It is supposed to complement it.”

BioRχiv, which operates in conjunction with HighWire Press in Stanford, California, is intentionally minimalist. “It’s designed to be basic and functional because it’s a mechanism for sharing manuscripts,” says Sever.

Papers — there are nine already, most of which had previously been posted to arXiv — will be grouped into some two dozen subdisciplines, including cancer biology and immunology. Individual papers come with unique digital object identifiers (DOIs), making them easy to cite, and are described as new results, confirmatory results or contradictory results. Researchers can discuss papers in comments that appear alongside articles; these will be moderated.

At present, Cold Spring Harbor Laboratory is paying for the site, but Sever and Inglis declined to disclose the cost of the site’s launch or its annual budget. They will look for ongoing sources of revenue, such as foundation grants, and plan to keep the site free to users. ArXiv’s annual budget is around US$750,000, a large proportion of which comes from the Simons Foundation, a non-profit organization in New York, with universities and others making smaller contributions.

Leonid Kruglyak, a geneticist at the University of California, Los Angeles, and a member of bioRχiv’s advisory board, expects many colleagues to adopt the site. Barriers that previously prevented biologists from using preprint servers seem to be eroding, he says. Most quantitative geneticists are no longer afraid of getting scooped by posting preprints of their work to arXiv, with many now seeing the process as a way to establish priority for their work.

Many journals, such as those published by the Genetics Society of America and the Ecological Society of America, have changed their policies in recent months to allow the practice. Nature Publishing Group journals allow preprints, and Science accepts them in many cases. Cell Press, which publishes biology stalwarts such as Cell and Neuron, discourages preprint posting. But “you can easily imagine a situation not too long from now, where having your journal not be preprint-friendly is an active disincentive to publishing there”, Kruglyak says.

However, Martin Fenner, a haematologist at Hanover Medical School in Germany, thinks that many life scientists will be more comfortable with open peer review, which is available from journals such as F1000Research. In open peer review, publishers post submitted draft manuscripts to a journal’s website before acceptance. Compared with preprints posted to a third party such as bioRχiv, this process results in a shorter lag time between first draft and final publication, and the different versions are clearly linked, Fenner says.

Graham Coop, an evolutionary geneticist at the University of California, Davis, posts his lab’s papers to arXiv and has already cross-posted one to bioRχiv. Peer pressure will prompt researchers in other fields to follow suit, he says. “If people see papers from people they know appearing on sites like the bioRχiv, they naturally feel more comfortable.”