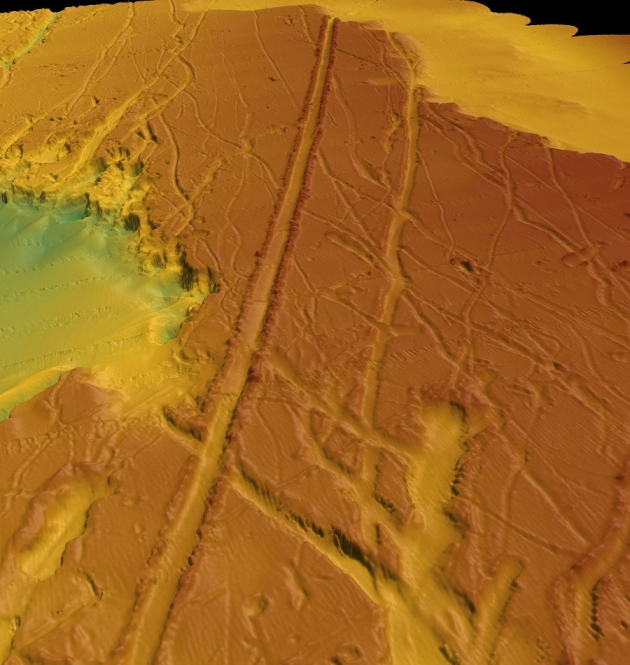 Pensioners flock to Florida from colder North American climes to spend their days basking in the sun and soaking in the warm subtropical waters. Now researchers say that thousands of years ago, icebergs did the same thing.

As the massive North American ice sheet began to melt 20,000 years ago, fresh water pooled into lakes dammed by glaciers and debris. When those lakes burst, floods carried icebergs into the northern Atlantic Ocean. Modelling studies have suggested that these hulking masses drifted east, past Greenland and towards Europe. But a study published on 12 October in Nature Geoscience1 reports evidence that the icebergs took a southerly route — a finding that offers a glimpse of how the changing climate can affect ocean circulation.

Alan Condron, a climate modeller at the University of Massachusetts in Amherst, and Jenna Hill, a marine geologist at Coastal Carolina University in Conway, South Carolina, used a computer climate model to map the icebergs' path with higher spatial resolution than previous simulations.

Their results show that some of the glacial floodwater running off North America formed a narrow current some 100 kilometres wide that flowed south along the continental shelf from the tip of present-day Newfoundland. Icebergs carried along by these flows would have reached South Carolina within a few months — and in some larger floods, would have reached Florida. The bergs would have been as large as some that calve from Greenland today, extending as far as 300 metres below the surface. 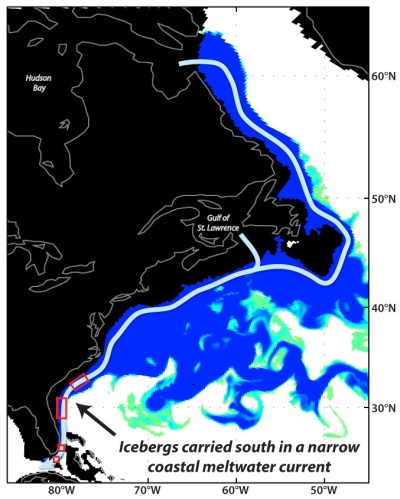 The model simulations help explain the presence of massive scars that have been found on the sea floor off the continental shelf, left by icebergs running aground. The team reports newly-discovered marks as far south as the Florida Keys, adding to the evidence for the idea that icebergs travelled into subtropical waters. These scour marks line up right along the flow of the simulated currents.

"It's good field data and interesting modeling," says John Andrews, an Arctic geologist at the University of Colorado Boulder, who has studied previously-discovered iceberg scours. He notes, however, that scientists have not determined precise ages for the seafloor scours, or whether they come from a single event or repeated events.

The work could help researchers understand how future climate change might affect ocean currents. The Greenland ice sheet is rapidly melting, and some researchers have worried that the influx of cold fresh water spreading across the North Atlantic could disrupt existing patterns of circulation such as the Gulf Stream.

Condron says that his results suggest that the Greenland meltwater could form a coastal current that reaches Newfoundland, injecting large amounts of fresh water directly into the North Atlantic Gyre, a powerful vortex of ocean currents. However, Florida pensioners need not worry about dodging icebergs in the Keys; the projected modern-day Greenwater meltwater flows would still be roughly 25 times smaller than the prehistoric ones that brought icebergs to Florida.

John Goff, an oceanographer at the University of Texas in Austin, says that these quantitative estimates are impressive. “I think these are really important observational constraints on climate modelling,” he says. “It just seems every time we increase our resolvability of these models we just find out more and more complexity, too.”