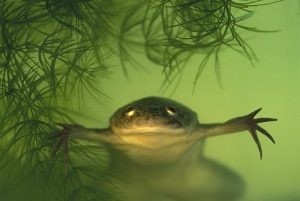 Imported African clawed frogs, some which may have been infected with chytridiomycosis, were used in pregnancy tests until the 1970s.

When improved pregnancy tests were developed in the 1960s, the advance came with an unexpected side effect: a role in the spread of chytridiomycosis, a lethal fungal disease that has wiped out hundreds of species of frogs.

A study published in PLoS ONE this week tracks the amphibian fungus that causes the disease, Batrachochytrium dendrobatidis, to an important reservoir in the Americas — African clawed frogs (Xenopus laevis)1. The frogs were used in pregnancy tests until the early 1970s, as it was known that the animals ovulated when exposed to a pregnant woman’s urine. “My Mom told me she did the frog test,” says Vance Vredenburg, an amphibian ecologist at San Francisco State University in California who led the latest study. When the test became obsolete, hospitals released the frogs, many of which probably carried the fungus, into the wild.

Although researchers have found B. dendrobatidis in Xenopus frogs in Africa since the 1930s, no one had actually tested for the fungus in escapee Xenopus frogs in North America. Vredenburg and his colleagues tested 23 Xenopus museum samples collected in California between 2001 and 2010, and found three infected frogs from 2001 and 2003.

The work supports the idea that humans are responsible for the disease’s spread in North America, by introducing an invasive species that acts as a carrier—unusually, Xenopus frogs do not die after contracting the disease. “If it were a natural spread, a conservation biologist might say maybe we should do nothing. But this really says we need to not let nature take its course,” says Vredenburg.

There could have been multiple species and events that spread the disease worldwide, notes Allan Pessier, a pathologist at the Wildlife Disease Laboratories of the San Diego Zoo in California. Detailed genetic fingerprinting would be needed to pin down the exact route, Pessier says.

Xenopus frogs are still used for research around the world: between 1998 and 2004, for instance, more than 71,500 of these frogs were exported from Africa as lab animals2. According to international regulations issued by the World Organisation for Animal Health in Paris, all frogs should be tested for B. dendrobatidis before being shipped as food, lab animals or pets, and infected animals treated or quarantined to help prevent spread [subs: see ref 2 to support this phrasing]. But compliance is variable. “I don’t think the US Department of Agriculture is really enforcing it,” says Pessier. “Not all the places shipping even have this capability.”

Although B. dendrobatidis is already rampant in the wild, the introduction of new strains of the fungus could theoretically produce more virulent diseases. “That’s a big unknown,” says Pessier. He is in favour of captive breeding for frogs in the pet trade — not just Xenopus — to ensure that they are free of infection before sale.

As for Xenopus use in labs, “the part of me that’s an ecologist wants them to regulate the heck out of it”, says Vredenburg. Some want the European Union to introduce animal-trade legislation in an effort to slow the spread of the disease, and a rule is currently under consideration in the United States that would allow Xenopus imports only by permit, for zoological, educational, medical or scientific purposes. But Vredenburg acknowledges that some research scientists are wary of restrictive regulations.

There are currently no effective ways of treating chytridiomycosis in the wild. The Amphibian Ark programme helps to capture threatened populations to keep them alive in captivity. And researchers around the world are working to develop topical vaccines and probiotics, together with the selective breeding of naturally resistant animals. However, all these strategies have practical problems that have prevented them from being implemented.