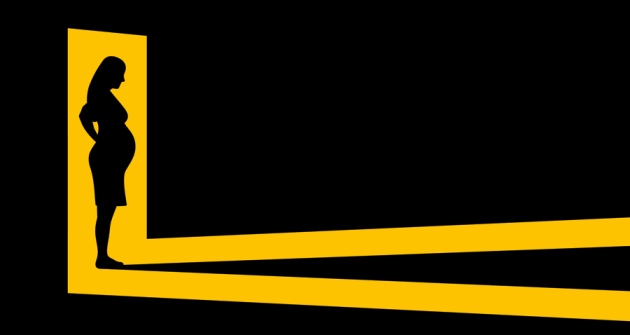 A healthy pregnant woman has a blood test to rule out the possibility that her baby has certain abnormalities, such as Down's syndrome. One week later, a genetic counsellor calls her and recommends a follow-up test such as amniocentesis. When the counsellor calls again, she says that the baby is healthy but that the mother needs to be screened for cancer.

Since 2011, clinicians have been able to analyse the genome of a fetus by sequencing DNA fragments found floating in the mother's blood. With the use of these non-invasive prenatal tests soaring (see 'Test scores'), mothers are increasingly facing unexpected, 'incidental' findings about their own health. As of late 2014, at least 26 pregnant women with abnormal blood-test results later learned that they had cancer1. In 10 of them, the prenatal tests prompted the medical assessments that revealed this; in the other 16, the cancers were not discovered until the mothers developed symptoms.

Parents, obstetricians and physicians have been taken by surprise. Consent forms used by test providers rarely mention the possibility of findings concerning the mother's health. And caregivers have little guidance on what to do when such findings arise.

Test providers need to rethink their consent forms to prevent unwarranted confusion and anxiety — not least, women deciding to terminate their pregnancies on the basis of wrong interpretations of test results2. And professional societies, such as the American College of Medical Genetics and Genomics (ACMG), the American College of Obstetricians and Gynecologists and the Society for Maternal-Fetal Medicine (SMFM), need to take the lead on providing education and clinical guidance.

These latest screening tests extract fragments of maternal and placental DNA (a proxy for fetal DNA) from the mother's blood. The fragments are sequenced and aligned to specific parts of a standard 'reference' human genome3. (In some cases, the reference genome is obtained from the mother's white blood cells.) By comparing the number of mapped fragments to the number expected to align, investigators can check whether there are too few or too many chromosomes (or parts of them) in the cells from which the fragments originated. If the initial analysis indicates an anomaly, a follow-up diagnostic procedure is strongly recommended. 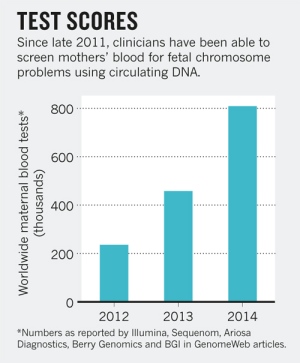 The low rate of false-positive results from these blood tests — around 0.2%, down from the roughly 5% for older screening methods4 — has greatly reduced the need for invasive follow-up tests such as chorionic villus sampling (CVS) or amniocentesis5.

In some cases, an initial analysis indicates an anomaly, but a follow-up procedure shows that the number of chromosomes in the fetal cells are normal3. There are several possible explanations: a twin might have died in the womb or developmental glitches may have caused clusters of abnormal cells in the placenta, a condition called confined placental mosaicism. A third explanation is a health problem in the mother.

Some women have discovered that they have a sex-chromosome abnormality that is associated with reduced fertility6. Some have found out that they have DiGeorge syndrome, a genetic abnormality associated with learning difficulties, immune problems and congenital heart defects7. Others have been told that some of their cells contain an abnormal number of chromosomes3. And increasingly, imbalances in the number of chromosome copies have flagged the presence of a tumour1.

Clinicians have yet to discover all that non-invasive prenatal testing can reveal about mothers. In my research, I have encountered three separate cases in which, on the basis of a maternal blood test, caregivers informed pregnant women that they would be having boys. After ultrasound images later showed that all three were pregnant with girls, it emerged that the Y chromosome sequences in the mothers' blood originated from transplanted organs that they had received from men8.

Although the commercial providers of the tests are striving to obtain data on follow-up assessments, doing so is hard, so the true extent of such incidental findings for mothers is unknown. A study in China revealed6 that in a group of 181 pregnant women — for whom follow-up procedures ruled out a problem in the fetus — 16 (9%) had a previously undiagnosed sex-chromosome abnormality.

On the basis of current estimates, if one million blood tests are performed in a given year, at least 2,000 women will have an abnormal result that disagrees with the results of a diagnostic procedure such as CVS or amniocentesis. Most often this is because of confined placental mosaicism, but women are increasingly discovering abnormalities that may have implications for their own health.

There is considerable confusion about how to handle incidental findings. As a medical geneticist, I frequently get calls and e-mails from obstetricians and other health-care providers asking, “What should I tell the patient?” Most caregivers are still grappling with the practical challenges of incorporating a new type of prenatal test into clinical care; few are familiar with genome sequencing or trained to discuss the management of a pregnancy that has been complicated by the discovery of a maternal health problem.

I reviewed the consent forms used by five major US commercial providers of non-invasive prenatal blood tests. In two of them the physician, not the mother, signs the form stating that the mother has been counselled. In two of the other three, the mother signs the form, but the form either does not mention incidental findings or it explicitly states that the laboratory will not report them. Only one notes that, “in rare circumstances, genetic testing may reveal sensitive information about your own health”.

To be fair, the possibility and extent of incidental findings for mothers has been appreciated only recently as the number of women being tested has increased. Still, providers must keep pace. Incidental findings could have major implications for mothers' care, life- and health-insurance policies, and so on.

A study published last year2 indicated that 6% of women who received an unusual prenatal DNA blood test result terminated their pregnancies without having CVS or amniocentesis. Women might weigh options differently if they understood that a result could signal a genetic anomaly in themselves, rather than in their baby.

Consent forms should be provided directly to the mother to sign. They should explicitly state that incidental results could emerge with implications for the mother's health. Check boxes could be used to opt in or out of being told certain things: for example some women might want to know that they have chaotic DNA patterns suggestive of a tumour, but prefer not to be told that they have a sex-chromosome abnormality.

Also crucial is better education for parents and health-care providers about the various prenatal blood tests now available — on how they work and what they can detect. Webinars or videos in multiple languages should be provided as soon as feasible by professional societies, such as the ACMG or the SMFM.

In parallel, clinicians and researchers need to get a better grasp on what kind of incidental findings could arise. New clinical tests have almost always been developed and validated in academic laboratories before being licensed. Yet until late 2014, blood tests for prenatal DNA screening were exclusively provided by commercial labs. Although the major companies offering the tests have propelled the field forward by increasing the number of women being tested and publishing results, gaps in follow-up clinical information are impeding understanding.

In the Netherlands, a nationwide evaluation is being conducted as a first step towards incorporating such tests into everyday health care. It is called the Trial by Dutch Laboratories for Evaluation of Non-Invasive Prenatal Testing (TRIDENT) study (see go.nature.com/qk2kpj). All abnormal results are correlated with the results of fetal or newborn chromosome testing, ultrasound evaluation of fetal growth, and placental studies to rule out confined placental mosaicism. The United States and other nations need a similar registry of the results of non-invasive prenatal testing, paired with clinical follow-up data.

The speed at which these blood tests have taken off in mainstream health care has brought focus and urgency to issues long debated in genetic circles9 — particularly, when and how to report to patients secondary findings from genomic sequencing. Handled properly, the incidental findings emerging from prenatal tests could accelerate treatments and save lives — rather than just increase the anxiety of thousands of pregnant women.