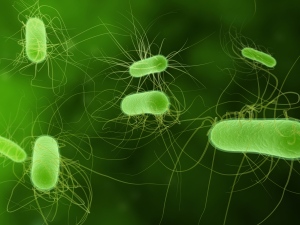 Bacteria such as Escherichia coli (here in an artist's impression) can acquire predictable mutations to adapt to a changing environment.

Although mutations, the driver of evolution, occur at random, a study of the bacterium Escherichia coli reveals that nature often finds the same solution to the same problem again and again.

Over time, random mutations enable organisms to adapt and diversify, often when geographically separated groups of the same species grow better suited to their local environment and less like members of the other group.

But that's not the only way that genetic diversity can arise. Researchers have reported cases of cichlid fish, palm trees and finches adapting to different ecological niches and splitting into different species despite living in the same place1–3. In 2008, evolutionary biologist Michael Doebeli of the University of British Columbia (UBC) in Vancouver and colleagues reported that E. coli bacteria can also diversify while sharing a test tube4.

In that study, they fed easy-to-digest glucose and a harder-to-stomach acetate to homogeneous populations of the bacteria, and let the bacteria chomp away. E. coli can switch between the two foods, but the team found that in each test tube two groups emerged, specialized in consuming either glucose or acetate. What they did not know was which genetic path each group took to achieve its specialisation.

In the new study, published online today in Public Library of Science Biology5, Doebeli and colleague Matthew Herron, also at UBC, went back to the frozen samples from three of their test tubes and sequenced 17 gene samples from various stages of the experiment. The DNA showed that in some cases identical mutations appeared independently in all three test tubes: despite the random nature of mutations, the same changes in the environment favoured the same genetic solutions.

Doebeli and Herron also found that some mutations occurred only in a specific order: after one group had become specialized for glucose and the other for acetate, both groups evolved to switch better between meal types. That last mutation would not have been useful until after the emergence of the first, which helped exhaust food supplies faster. That finding is novel, says systems biologist Michael Stumpf of Imperial College London. Although biologists have observed traits appearing in a particular order, until now no one had documented the genetic basis for those changes.

"It's of interest to know how often the genes that change are the same or different," says biologist Jerry Coyne of the University of Chicago, Illinois. "That tells us how much constraint there is on evolution." Insects often evolve resistance to insecticides through the same common mutations, he notes.

Coyne adds, however, that it may not be practical to extrapolate very much from an asexually reproducing species such as E. coli to organisms that reproduce sexually.

And Stumpf warns that because bacteria live in such large populations, their evolution in aggregate may be more predictable than that of larger, more dispersed species.

Environments also change faster than most species can evolve, Stumpf says, so he would be interested in future studies that examine how predictable evolution is in changing environments. Doebeli agrees: he has dozens of other frozen lines of bacteria, which evolved in environments of varying complexity, waiting for their genomic snapshots.