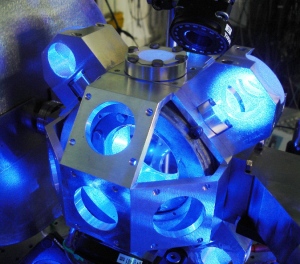 Under a blue laser light, a cloud of strontium atoms kept in a vacuum fluoresces at a characteristic wavelength, which could be used to redefine the second.

The international definition of a second of time could be heading for a change, thanks to researchers who have demonstrated that an advanced type of ‘atomic clock’ has the degree of precision and stability needed to provide a new standard.

Jérôme Lodewyck of the Paris Observatory and his colleagues have shown that two so-called optical lattice clocks (OLCs) can remain as perfectly in step as experimental precision can establish1. They say that this test of consistency is essential if OLCs are to be used to redefine the second, which is currently defined according to a different type of atomic clock.

Christopher Oates, a specialist in atomic-clock time standards at the National Institute of Standards and Technology (NIST) in Boulder, Colorado, says that this is “very beautiful and careful work, which gives grounds for confidence in the optical lattice clock and in optical clocks generally”.

Since 1967, the second has been defined as the duration of 9,192,631,770 oscillations of the microwave radiation absorbed or emitted when a caesium atom jumps between two particular energy states.

The most accurate way to measure this frequency at present is in an atomic fountain, in which a laser beam propels atoms in gasous caesium upwards. Emission from the atoms is probed as they pass twice through a microwave beam – once on the way up, and once as they fall back down under gravity.

Caesium atomic-fountain clocks are used to set national time standards at NIST, at the Paris Observatory and elsewhere.

The caesium fountain clock has an accuracy of about three parts in 10 quadrillion (3 × 10−16). This means that it will keep time to within one second over 100 million years. But some newer atomic clocks can do even better. Monitoring emission from individual ionized atoms trapped by an electromagnetic field can supply an accuracy of about 10−17.

The clocks studied by Lodewyck and his colleagues are newer still: they were first demonstrated less than a decade ago2. Although they cannot yet beat the accuracy of trapped-ion clocks, they have been shown to be comparable to caesium fountain clocks, and some researchers are convinced that they will ultimately be the best of the lot.

There are two reasons for this. First, like trapped-ion clocks, they measure the frequency of visible light, with a frequency tens of thousands of times higher than that of microwaves. Second, they measure the average emission frequency from several thousand trapped atoms rather than just one, and so the measurement statistics are better. The atoms are trapped in an optical lattice, rather like an electromagnetic egg box for holding atoms.

If OLCs are to succeed, however, researchers must show that one such clock ticks at exactly the same rate as another prepared in an identical way. This is what Lodewyck and colleagues have shown. They prepared optical lattices that each held about 10,000 atoms of the isotope strontium-87, and have shown that the two clocks stay in synchrony to within a precision of at least 1.5 × 10−16, which is as accurately as the experiment could measure.

Better atomic clocks would be a boon to basic science. For example, physicists could use such clocks to investigate whether some of nature’s fundamental constants change over time, as some theories predict.