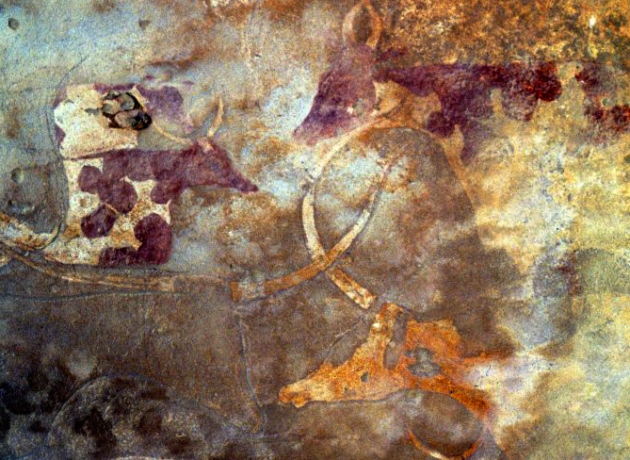 Images of dairy animals some 5,000–8,000 years old in the Acacus mountains of southwest Libya suggest that these animals played an important part in the lives of the region’s inhabitants.

Yoghurt may have made it on to the menu for North Africans around 7,000 years ago, according to an analysis of pottery shards published today in Nature1.

The fermented dairy product left tell-tale traces of fat on the ceramic fragments, suggesting a way that the region’s inhabitants may have evolved to tolerate milk as adults.

The same team had previously identified the earliest evidence for dairying in potsherds nearly 9,000 years old from Anatolia2. But the findings from 7,000 years ago still predate the emergence and spread of the gene variants needed for the adult population to digest the lactose found in milk, says biomolecular archaeologist Richard Evershed of the University of Bristol, UK, who led the study with archaeological scientist Julie Dunne. He suggests that making yoghurt may have made dairy products more digestible.

“They could have consumed milk but it might have made them a little poorly,” Evershed says. “Perhaps they were processing the milk to lower the lactose content.”

Evershed and Dunne’s team analysed pottery shards dating from 5200 to 3000 BC, exavated from the Takarkori rock shelter in southwestern Libya’s Acacus mountains. Although today this area is in the Sahara, 7,000 years ago it would have been more lush landscape capable of supporting dairy animals.

The Takarkori shelter and others nearby are home to vivid and colourful rock art depicting cattle, some with full udders, and even pictures of people milking cows, but these images are nearly impossible to date precisely. Archaeologists have also found fragments of domestic cattle bones at these sites, but these do not indicate whether the animals were kept for meat, dairying or other uses. Evershed and Dunne hoped to overcome these problems by examining fat residues left on the pottery shards.

The researchers examined 81 shards, using mass spectrometry to identify specific animal fats and using the relative levels of carbon isotopes to pick out more exactly the origin of those fats in 29 of the samples. Of those 29, at least half contained fats came from dairy foods.

Carbon isotopes from milk fat can also point to the sorts of food the dairy animals ate, as different plants incorporate varying amounts of carbon-13 relative to carbon-12. The team found that the milk fats came from a range of plants, potentially suggesting that the people milking the animals moved around a lot, Evershed says. They may even have grazed their cattle up and down mountains, depending on the season.

Mark Thomas, a geneticist at University College London, calls the latest work “a very exciting finding”. He speculates that mutations that allow adults to digest lactose, or lactase persistence, that arose around 7,000 to 8,000 years ago in Europe and later spread to Africa could have offered a unique benefit in a parching climate. Fresh milk is a reliably uncontaminated source of fluid, and people able to tolerate lactose may have stayed better hydrated than people without the gene.

This story has been updated to indicate that lactase persistence emerged in Europe 7,000 to 8,000 years ago, not 6,000 years ago.