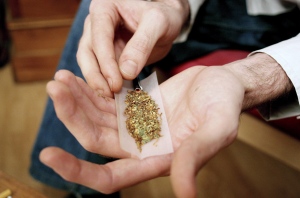 Getting high on a regular basis as a teenager has been said to lower your IQ — but the truth may not be so simple.

Cannabis rots your brain — or does it? Last year, a paper published in Proceedings of the National Academy of Sciences (PNAS)1 suggested that people who used cannabis heavily as teenagers saw their IQs fall by middle age. But a study published today2 — also in PNAS — says that factors unrelated to cannabis use are to blame for the effect. Nature explores the competing claims.

What other factors might cause the decline in IQ?

Ole Røgeberg, a labour economist at the Ragnar Frisch Centre for Economic Research in Oslo and the author of the latest paper, ran simulations which showed that confounding factors associated with socioeconomic status could explain the earlier result. For example, poorer people have reduced access to schooling, irrespective of cannabis use.

Is this a case of correlation versus causation?

Possibly. The data used in the original paper came from the Dunedin Study, a research project in which a group of slightly more than 1,000 people born in New Zealand in 1972–73 have been tracked from birth to age 38 and beyond. As with all such birth-cohort epidemiological studies (also called longitudinal studies), there is a risk of inferring causal links from observed associations between one factor and another.

Past research on the Dunedin cohort shows3 that individuals from backgrounds with low socioeconomic status are more likely than others to begin smoking cannabis during adolescence, and are more likely to progress from use to dependence. Røgeberg says that these effects, combined with reduced access to schooling, can generate a correlation between cannabis use and IQ change.

Do other studies show a drop in IQ with cannabis use?

Røgeberg cites three studies4–6 in which cannabis use is not associated with declining IQ. He says that these studies show clear reductions in IQ for the heaviest smokers, but these are not permanent, and people who have stopped smoking heavily show no decline.

What do the original paper's authors make of Røgeberg's analysis?

Madeline Meier, a psychologist at the Duke Transdisciplinary Prevention Research Center in Durham, North Carolina, who co-wrote the original paper with her colleagues, says that Røgeberg's ideas are interesting. However, she points out that the authors of the first PNAS paper restricted their analysis to individuals in middle-class families and those with low or high socioeconomic status. The outcome suggests that the decline in IQ cannot be attributed to socioeconomic factors alone.

So who is right?

It is hard to say. Both analyses study the same data set in different ways, and each has merits.

Is there a way to find out the answer definitively?

Perhaps — by comparing the Dunedin Study with another in a different country. Such comparisons have been done before. For example, the United Kingdom's Avon Longitudinal Study of Parents and Children (ALSPAC) found that children who were breastfed for longer went on to have higher IQs, lower blood pressure and lower body mass indices than those who were not. However, longer breastfeeding is associated with higher socioeconomic status in the United Kingdom; when the data were compared with data from the Pelotas longitudinal study in Brazil, where breastfeeding is not associated with higher socioeconomic status, the link with increased IQ was maintained, but the other benefits disappeared7.

What do other scientists think?

Mitch Earleywine, a psychologist at the University at Albany, State University of New York, says that Røgeberg's analysis definitely supports the idea that links between adolescent cannabis use and drops in IQ are essentially spurious, arising from socioeconomic differences rather than any sort of pharmacological action. John Macleod of the University of Bristol, UK, who works on the ALSPAC data, points out that Meier and her colleagues acknowledged in their original paper that the results might be caused by confounding factors. He adds that the modelling in Røgeberg's paper shows that within a set of reasonable assumptions, this is indeed possible.