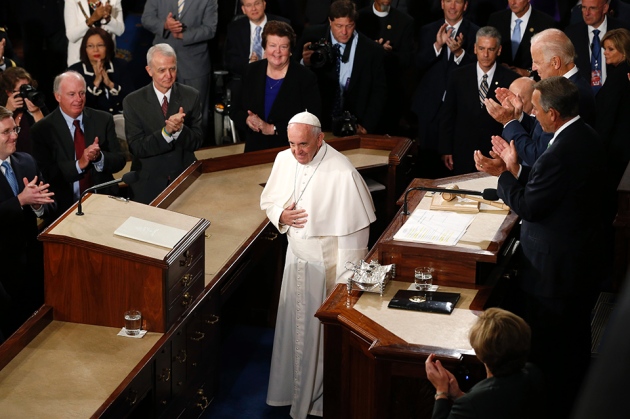 Pope Francis's speech inspired a rare moment of harmony in the US Congress.

Pope Francis challenged US lawmakers on 24 September to lead the world in creating a more just brand of economic development, calling for “courageous actions and strategies” that will lift people out of poverty and protect the planet.

“I am convinced that we can make a difference and I have no doubt that the United States — and this Congress — have an important role to play,” he told a joint session of Congress.

In slow and methodical English, the Pope addressed a range of topics, among them liberty and freedom, immigration, war and family values. Speaking to a Congress that is sharply divided along ideological lines, he called for dialogue and political leadership on difficult issues. “A good political leader is one who, with the interests of all in mind, seizes the moment in a spirit of openness and pragmatism,” he said. “A good political leader always opts to initiate processes rather than possessing spaces.”

Lawmakers on both sides of the aisle credit the Pope with taking a conciliatory approach to the highly charged subject of global warming. “He gave a speech that was non-political and appealed to people's better instincts,” says Senator Charles Schumer, a Democrat from New York.

Although the Pope repeatedly cited his own encyclical on climate change while calling for stronger environmental protections, Republican lawmakers point out with some satisfaction that he did not specifically mention the words “climate change” or “global warming” during the speech. Some conservatives criticize the Pope’s stance while questioning core tenets of climate science, including well-documented impacts such as sea-level rise and melting glaciers.

“We have to ask the question, is it more kind — is it smarter — to drive up the cost of energy for poor people when you achieve virtually no global-warming benefit?” says Senator Jeff Sessions, a Republican from Alabama.

The Pope has made waves since his election as head of the Catholic Church in March 2013. A native of Argentina, he is the first pontiff from the Americas. In his encyclical letter on the environment released in June, he called for equitable and sustainable development as well as action to limit global warming.

The Pope's appeals seem to be aimed at United Nations climate talks later this year in Paris, where nations hope to negotiate an agreement to limit greenhouse-gas emissions.

On 23 September, the pontiff highlighted his concerns about the environment as he visited with President Barack Obama at the White House, calling climate change “a problem which can no longer be left to a future generation”. In his speech to Congress, the Pope underscored the role of science and technology in providing the world with clean and sustainable sources of energy.

“In this regard, I am confident that America’s outstanding academic and research institutions can make a vital contribution,” he said.

The Pope's next stop is New York City to address the UN on 25 September, when the body will kick off a summit to launch its new Sustainable Development Goals. The targets are designed to guide poverty-reduction efforts over the next 15 years.

The impact of the Pope's new emphasis on the environment remains unclear — particularly in the United States, where global warming remains a divisive political issue. A survey of US Catholics conducted by the Pew Research Center before the release of the encyclical found that 64% of respondents said that helping the poor is “essential” to their faith, but only 29% said the same of action to address climate change. Pope Francis may have a hard time changing that.

“Historically, there is very little evidence that statements by Church leaders — including the Pope — do much to shift voting behaviour or attitudes,” says Mark Gray, a political scientist at the Center for Applied Research in the Apostolate at Georgetown University in Washington DC. “The ‘Francis effect’ on climate change is likely to be limited to elevating the issue and getting it discussed more in the emerging presidential-election cycle.”