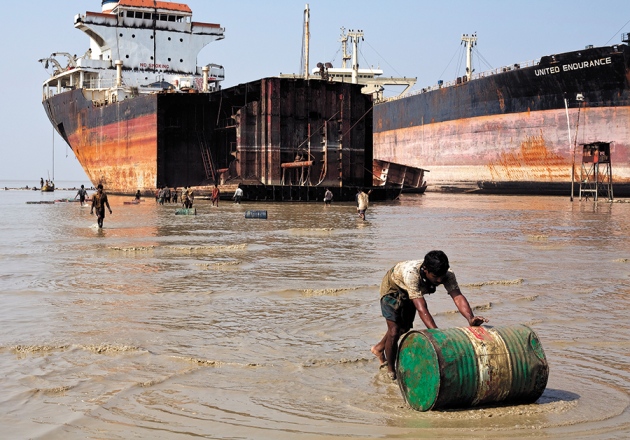 A shipbreaking yard in Chittagong, Bangladesh. Several workers in the country's scrapping industry are injured every week.

On 26 April 1956, US entrepreneur Malcom McLean watched a converted oil tanker leave Port Newark in New Jersey carrying 58 of his inventions: the modular shipping container. By 2015, the largest container ship in the world, with a deck the area of 3.5 soccer fields, could carry about 20,000 of the units.

The industry is at a crossroads. The expected profits from larger ships are being undermined by excess capacity, slowing trade and plunging transport prices. In 2015, container freight rates for the world's busiest shipping route — between Asia and northern Europe — dropped by nearly 60% in three weeks. A dozen shipping companies went bankrupt, including Denmark's Copenship and China's Nantsing. Even the giant container-conveying Danish conglomerate Maersk announced that it would lay off 4,000 employees by 2017 and delayed or cancelled orders to build mega-ships.

Companies face a dilemma. If they buck the trend of scaling up, they risk being less competitive. Yet running mega-ships only part full wipes out the benefits of economies of scale. Ships use more fuel per container when half-loaded than for a full cargo.

The future is green shipping: efficient marine transport with minimal health and ecological damage6. Cleaner practices — especially on ship scrapping, emission control and port management — are needed. Achieving this will require heroic efforts by the industry and its engineers in collaboration with regulators, port authorities and communities. Environmental impacts should be considered in determining optimal routes and modes for delivery of goods.

Shipping policies must be applied worldwide to be effective. Shipping and aviation emissions are not addressed by global climate-change agreements, including the deal made in Paris last December. The International Maritime Organization (IMO), which regulates international shipping, is engaging — slowly. Releases into the oceans of oils, noxious liquids, harmful substances, sewage and garbage have been restricted since the 1980s by the International Convention for the Prevention of Pollution from Ships (MARPOL), following a spate of oil-tanker accidents. Air-pollution limits for shipping were adopted in 1997 but came into force only in 2005.

Energy efficiency is the IMO's present focus. Starting in 2013, its Energy Efficiency Design Index and Ship Energy Efficiency Management Plan aim to lower CO2 emissions from shipping through tighter technical requirements on engines and equipment, maintenance regimes and voyage plans. No absolute emissions-reduction targets were set. Unfortunately, long-term expansion in global trade and growing ship numbers mean that even if these measures are fully implemented, total shipping emissions are projected to quadruple from 1990 to 20508.

The IMO has set up four 'emission-control areas' — the Baltic Sea, the North Sea, the US Caribbean and the coastal waters of Canada and the United States — where ships are required to minimize emissions mainly of SOx and NOx. These regions exclude the world's ten largest container ports, such as the Chinese ports of Shanghai, Shenzhen, Hong Kong and the South Korean port of Busan, which are all in Asia (see 'The dirty ten'). We estimate that these ten sites alone contribute 20% of port emissions worldwide. 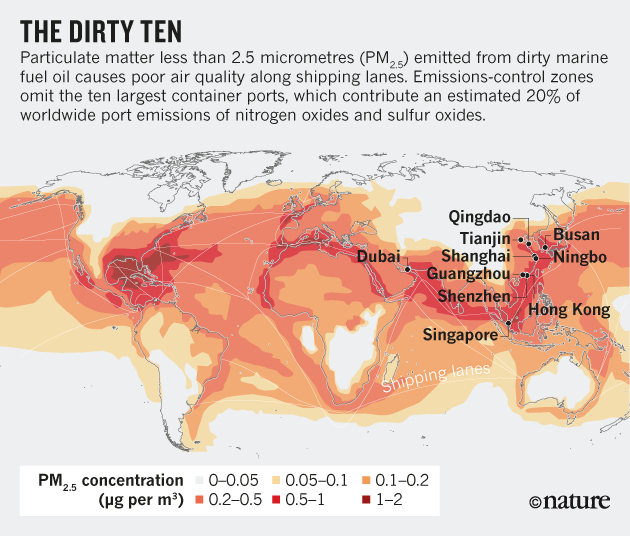 A few developed countries, including the United States, the United Kingdom and Norway, limit the sulfur content of marine fuel in their national waters to within 1,000 parts per million (p.p.m.). Most developing countries, including India and China, permit dirtier fuels with 35,000 p.p.m. of sulfur. The European Union fuel standard for cars is 10 p.p.m.

Ship scrapping is heavily polluting. Asbestos, heavy metals and oils are toxic. Workers are exposed to hazardous fumes. The EU has laws requiring that ships registered in Europe be broken up only in licensed yards that meet strict guidelines. But it is easy to change a ship's registration and demolish it in a country with a more lax approach to labour and environmental protection.

India, Bangladesh, and Pakistan are popular for ship scrapping9. In Bangladesh for example, 40,000 mangroves — trees that stabilize many tropical coasts and are habitats and breeding grounds for many species — were chopped down in 2009 alone to accommodate shipbreaking yards. The pollution from scrapping there has caused an estimated 21 fish and crustacean species to become extinct. And reportedly, each week one worker dies and seven are injured in the scrap yards of Bangladesh.

Congestion adds to pollution and disruption. Large volumes of cargo overwhelm ports, surrounding roads and waterways. Hasty expansion or construction of berths and canals to take more large ships can be environmentally disastrous. Where the water in existing harbours is too shallow, port authorities may reclaim land from the sea or build artificial islands in deeper waters.

Coastal changes destroy ecosystems. Over the past three decades, about 75% of mangroves have disappeared from Shenzhen, following port expansion and land reclamation. Plans for the Porto Sul port in Brazil — slated to open in 2019 — identified 36 potential environmental impacts, including driving away dolphins and whales and killing seabed fauna.

Traditional shipping routes cannot keep up. The Panama Canal, which connects the Pacific and Atlantic oceans, can currently handle vessels carrying only up to about 5,000 standard containers. A project to expand it to accept ships with 13,000 containers (the 'New Panamax' class) should be completed by May. But the largest mega-ships, such as Maersk's E-class and Triple E-class (with capacities between 14,000 and 18,000 containers), will still be unable to cross (see 'Supersize ships'). In the meantime, heavy traffic at Panama, complicated navigation and constant maintenance have led to a ten-day delay in voyage times. 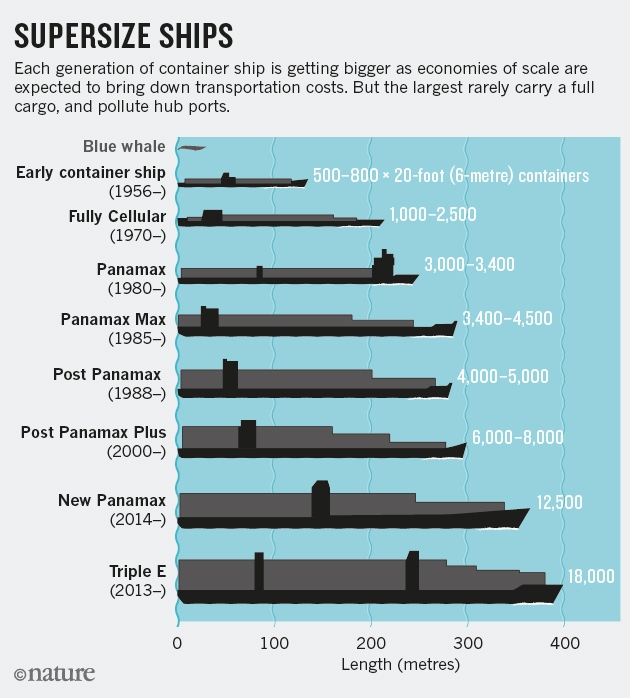 To take advantage of the business opportunity, construction is scheduled to start this year on a 280-kilometre-long canal through Nicaragua. This US$50-billion project, funded by a billionaire-owned Hong Kong company, could destroy almost 400,000 hectares of tropical forests and wetlands, home to threatened and endangered wildlife and indigenous communities10.

Public concern about the pollution and health impacts of shipping remains muted because the industry is a backbone of the global economy, and its activities happen far from where most people live and often beyond the jurisdiction of local regulators. We cannot rely only on new ship designs and engine innovation to minimize the ecological footprint of shipping: today's ships might be in use for another 20 years or more. Several issues must be addressed together to make the industry greener.

Implementing the following recommendations could save thousands of lives each year, ensure cleaner coastal air and reduce ecological damage from shipping.

Clean up ship scrapping. The IMO adopted the Hong Kong International Convention for the Safe and Environmentally Sound Recycling of Ships in 2009, but only Norway, Congo and France have acceded as of February 2016. The IMO's priority should be to ensure that the principal scrappers — India, Bangladesh and Pakistan — adhere to these guidelines. The first step is to set up local offices in these countries to collect and analyse monitoring data independently and to propose improvements to local governments. International loan or aid programmes to these countries, sponsored by the World Bank or the Asian Development Bank, for example, should demand clean ship-scrapping practices as an incentive. To discourage transfer of scrapping elsewhere, a watch list of poorly performing countries needs to be updated by IMO regularly until an international convention enters into force.

Control emissions. Stricter IMO emissions regulations are needed, including a cleaner worldwide standard for sulfur released by combustion of marine fuel. A 97% cut in SOx can be achieved by reducing the sulfur content from 35,000 p.p.m. to 1,000 p.p.m. fuel oil. Today's low oil price provides a great opportunity for this transition to happen. The current cost of 1,000-p.p.m.-grade fuel oil (around US$300 per tonne in Singapore, for example) is less than half of that of the cheapest dirty fuel four years ago.

Marine fuel is a sideline for oil refineries — only 2–4% of the total fuel market. Stricter emissions standards will stimulate demand for high-quality fuel. Incentive programmes (tax rebate and subsidies for producers) will be needed to ensure a reasonable profit margin to recover the initial high investment in developing countries, where there is little current capacity. Government interventions will be needed in countries with state-run oil companies, such as in China and India.

An alternative is to install scrubbers for exhaust-gas cleaning on ships. Scrubber units blend the exhaust gas with water or caustic soda to remove up to 99% of SOx and 98% of particulate matter from high-sulfur fuel. At the moment, scrubbers are expensive, costing $2 million for one ship. But China, for instance, could equip its entire container fleet in one year by funding a 50% subsidy for scrubbers. The total cost? Just 0.5% of the $150 billion per year it has spent since 2013 to fight pollution. Shipping companies could recoup the other 50% in one year from fuel savings. With a stricter emissions standard, the demand for scrubbers would go up, and the costs down, as production scales.

Improve port management. Port authorities should review the environmental impact of their previous construction and disclose information on their future development plans to demonstrate responsible management of public assets. They should coordinate with transport-planning bureaus to seek the most economical and environmentally friendly strategy to dispatch goods; the optimal capacities of its terminals; and how to assist ships to load and unload quickly. Making port-business statistics and the results of environmental-impact studies accessible will allow the research community to be involved in the decision-making process. Environmental non-governmental organizations should campaign to increase public awareness of port development.

After decades of loose oversight, it is time for shipping to get a whole lot greener.

An earlier version of the graphic ‘The dirty ten’ gave the wrong unit for PM2.5 concentrations. It has now been corrected.