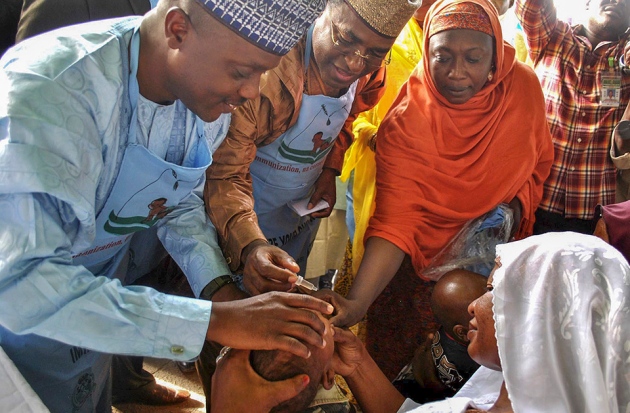 A child in Nigeria receives a polio vaccine as part of an immunization drive in 2013.

In a major setback to the global campaign to eradicate polio, Nigeria has seen its first cases of wild poliovirus in more than two years, the World Health Organization (WHO) in Geneva, Switzerland, announced on 11 August. The country will now start emergency-vaccination campaigns to hold back the virus's spread.

Nigeria was on the brink of wiping out polio; its last recorded case had been in July 2014. That was a remarkable achievement, given that in 2012, it recorded 122 cases — more than all other countries combined. Improvements to vaccination efforts had prompted the turnaround, and seemed to have set the stage for Africa to be declared polio free in 2017.

The earliest that could now happen is 2019: a region must be free of polio for three years for the WHO to officially declare that it has eradicated the virus.

“This is truly disappointing because Nigeria had made extreme progress with their control of polio virus,” says Michel Zaffran, director of polio eradication at the WHO.

Nigeria's government found two children that had been paralysed in July by polio, the WHO said. Wild polio virus was detected in one of them, living in the Gwoza district of Nigeria's northeastern-most state, Borno. A closely-related virus was also found in a healthy child living about 100 kilometres away in the Jere district; they had been in contact with the other paralysis case.

The lineage of poliovirus responsible for the outbreak was last detected in 2011 in Borno. Together with other northeastern states, the region has been the target of violent attacks by the Islamic militant group Boko Haram — a situation that has hampered polio-vaccination teams, as well as those looking for signs of the virus, from accessing the area.

“Clearly cases were missed, because this thing has been circulating for four years,” says Oliver Rosenbauer, spokesperson for the WHO’s Global Polio Eradication Initiative. Polio causes paralysis in around 1 in every 200 infections, and Rosenbauer says that there is probably a reservoir of individuals spreading the virus, and that more polio cases are “likely”.

“It was to be expected that there would be problems with the quality of surveillance, but we didn’t think there was wild polio virus circulating in this area of the country,” says Zaffran.

Next week, health officials in Nigeria will begin the first of six emergency vaccination campaigns. The first will target children in Borno state; the rest, not yet scheduled, will attempt to reach children across northeastern Nigeria and in neighbouring Chad, Cameroon and Niger. Improving surveillance for poliovirus cases — for instance, in healthy individuals and in the environment — is another priority, Rosenbauer says.

David Heymann, chairperson of Public Health England and a former head of the WHO's polio-eradication effort, sees the latest cases as a positive sign that surveillance is in place to detect polio in even the hardest-to-reach parts of Nigeria. More polio cases could still turn up, Heymann says, but he still expects Nigeria and the rest of the world to wipe out polio eventually.

“It shows that the end game is very difficult,” he says. “There will be some setbacks all along the way.”

Afghanistan and Pakistan are the only other countries besides Nigeria that have never interrupted the spread of polio, but they have made gains in battling the virus. Pakistan has recorded 13 polio cases this year and Afghanistan has seen 6, compared to a combined 74 cases in 2014.