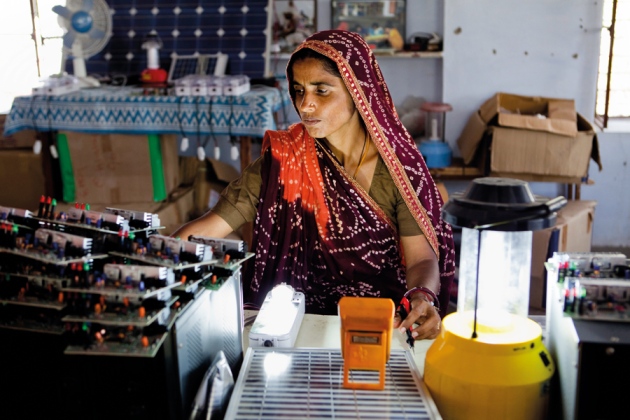 India's policy-makers have three big energy goals: providing everyone with access to energy, securing energy supply and trying to limit carbon emissions without encumbering the nation's growth. These important concerns miss the point.

Energy access cannot be assured by progress towards a simple target such as supplying power 24 hours a day, 7 days a week, nationwide. India has deep divides in the quantity and quality of energy consumed across income groups and between rural and urban households. Fuel subsidies are poorly designed and the strategies to reduce them to enhance energy security are heavy-handed. And because of limited action by the world's largest emitters, there is little left in the global carbon budget before planetary safety limits are breached. Clean energy and alternative growth is imperative.

India's energy priorities should be reframed as follows: to cater to the different energy demands of citizens of various economic strata; to direct energy subsidies to benefit the poor; and to promote low-carbon industry.

Urban India aspires to have a reliable 24/7 electricity supply — voltages currently drop at peak demand times such as during evenings. Meanwhile, more than one-third of India's households, mostly poor and rural, are not connected to the electricity grid. For those that are, blackouts last 4–16 hours a day. The poorest households consume one-quarter of the energy of those at the highest income levels. Urban centres are in effect subsidised by rural areas, which are being overcharged for substandard service1. The poorest households pay 30% more per unit of useful energy than the richest2.

One solution to these disparate demands is to deliver more electricity through the grid while adopting cleaner energy sources. The Indian government has announced ambitious plans for renewable energy: up to 175 gigawatts (GW) of installed capacity by 2022. There are many challenges to achieving this target, from the availability of resource data on which to base decisions and managing risks to the high cost and the huge variability across the grid in terms of energy sources and infrastructure.

Meanwhile, the promise of reliable electricity through centralized infrastructure and systems remains unfulfilled. This is in part because most electricity utilities suffer financial difficulties — they lost more than US$19 billion in 2012–13 (ref. 3). One solution is to tap smaller-scale distributed renewable energy sources, primarily solar, biomass and small-scale hydropower. Off-grid power based on these technologies has advantages such as network resilience, flexibility and environmental and health benefits4.

More than one million households in India rely on solar off-grid systems for lighting. A further 20 GW of energy capacity could be achieved if 15% of irrigation pumps were converted to solar energy. Renewable-energy applications can provide heating, cooling, cooking and mechanical power as well as electricity5.

More than 250 companies across India, with long supply chains and networks of village-level entrepreneurs, operate in the decentralized clean-energy sector already. They demonstrate that putting power in the hands of poor people can begin a transformation in how energy access is understood and delivered. At the same time, such rapid growth and geographical spread could result in variable quality of service and expensive energy for poor people. More training would help to keep up standards.

The challenge is to balance two types of investment: those in the centralized grid, which are key to the aspirations of millions of higher-income households, and funds for standalone systems in isolated and underserved areas or for integrating such systems to the grid.

Another reason for pursuing renewable energy in India is to avoid the pitfalls of a growth strategy mostly based on fossil fuels. Already, imports account for more than 80% of India's crude oil and 25% of its coal and gas, raising worries about supply and price volatility6. Petroleum constitutes nearly 30% of all commodity imports, leaving India little fiscal room to shrink its large current account deficit.

India hands out generous energy subsidies, most of which are not means-tested (see 'Energy imbalance'). For example, in 2013–14 the government gave away $8 billion worth of subsidies for liquified petroleum gas (LPG)7. Yet less than half of urban households and only 6% of rural ones exclusively use LPG for cooking. Traditional biomass fuels such as wood account for 20% of Indian households' energy use. The government must rationalize subsidies and target them better. A well-designed programme would increase access to modern cooking energy (electricity and gas) for the same budget. For instance, reducing subsidized LPG to 9 cylinders (instead of 12) per year per connection could save the government $724 million. Excluding the richest 15% of households from the subsidy could save $1.18 billion annually. The savings should be redirected to increasing the availability in rural areas of cleaner cookstoves and biogas, and could extend LPG provision to 30 million more households.

What to make in India?

Energy and climate policies are closely tied to industrial policy. Even on a low-carbon energy pathway, total primary energy consumption in India will at least double by 2030 (compared to 2011 levels). Energy efficiency alone — in industry, residential and commercial spheres — cannot mitigate climate change.

Although unemployment rates in India are low (less than 5%) nearly 35% of employment is casual labour. The government's Make in India campaign, launched in September 2014, calls for aggressive job creation through rapid growth in the industrial sector.

Manufacturing consumes nearly one-third of India's primary energy supply, and contributes to 16% of gross domestic product (GDP) and more than 20% of direct emissions8. These emissions would grow, should India achieve its target of 25% contribution to GDP from manufacturing.

The best opportunity for decarbonization, therefore, is the power sector — which contributes nearly 38% of overall emissions8. Here, renewable energy could account for about 30% of the electricity mix by 2030.

In sectors such as metal production, non-metallic minerals, chemicals and textiles, which contribute most to manufacturing GDP, fuel accounts for 9–23% of all input costs compared to the industrial-sector average of 5%. Energy efficiency and alternative fuels should play a key part in decarbonizing these sectors. India's cement industry, for instance, is one of the world's most efficient, but it also accounts for 7% of the country's emissions. Here, technological advances such as refuse-derived fuels could save 600 million tonnes of coal, 550 billion units of electricity and 3.4 gigatonnes of carbon dioxide emissions between now and 2050.

A shift to a different industrial mix is required: away from such energy-intensive sectors and towards metal fabrication, manufacture of computers and electronics, electrical and mechanical machinery, advanced materials, biotechnology, nanotechnology and photonics. This would lower the energy footprint of India's industrial growth.