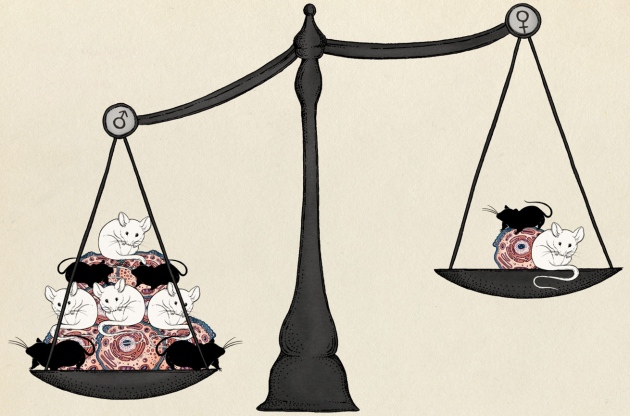 More than two decades ago, the US National Institutes of Health (NIH) established the Office of Research on Women's Health (ORWH). At that time, the Congressional Caucus for Women's Issues, women's health advocacy groups and NIH scientists and leaders agreed that excluding women from clinical research was bad for women and bad for science. In 1993, the NIH Revitalization Act required the inclusion of women in NIH-funded clinical research.

Today, just over half of NIH-funded clinical-research participants are women. We know much more about the role of sex and gender in medicine, such as that low-dose aspirin has different preventive effects in women and men, and that drugs such as zolpidem, used to treat insomnia, require different dosing in women and men.

There has not been a corresponding revolution in experimental design and analyses in cell and animal research — despite multiple calls to action1. Publications often continue to neglect sex-based considerations and analyses in preclinical studies2, 3. Reviewers, for the most part, are not attuned to this failure. The over-reliance on male animals and cells in preclinical research obscures key sex differences that could guide clinical studies. And it might be harmful: women experience higher rates of adverse drug reactions than men do4. Furthermore, inadequate inclusion of female cells and animals in experiments and inadequate analysis of data by sex may well contribute to the troubling rise of irreproducibility in preclinical biomedical research, which the NIH is now actively working to address5, 6.

The NIH plans to address the issue of sex and gender inclusion across biomedical research multi-dimensionally — through programme oversight, review and policy, as well as through collaboration with stakeholders including publishers. This move is essential, potentially very powerful and need not be difficult or costly.

Certain rigorous studies evaluating the effects of sex differences have been effective in bridging the divide between animal and human work. One example concerns multiple sclerosis (MS). Women are more susceptible to MS than men are, but develop less-severe forms of the disease. The most widely accepted MS animal model — rodent experimental autoimmune encephalomyelitis (EAE) — has revealed7 that sex differences in MS are related to both reproductive and non-reproductive factors. Findings8 that oestrogen therapy provided benefits in rodent EAE supported use of an oestrogenic ligand as a candidate neuroprotective agent for MS that is now being studied.

Moreover, differences between the sexes in both the animal model and human MS have now been correlated with genetic factors. For example, some Y-chromosome genes (in male mice) seem to have a protective effect against the disease, and some X-chromosome genes (in female mice, with potentially double the dosage) have a disease-causing effect. Earlier this year, a study9 demonstrated that mice with XY chromosomes in the central nervous system had greater neurodegeneration than did those with XX chromosomes. The findings have important implications for other sex-skewed neurological conditions, including Parkinson's disease, schizophrenia and stroke. Finally, inherited effects have been linked to imprinting of genes on sex and non-sex chromosomes (autosomes). Maternal parent-of-origin effects have been associated with MS risk10.

“Convention is another probable reason for reliance on the male-only models.”

Substance abuse is also affected by sex. One target for intervention has been stress systems that mediate craving. Female rats exhibit a greater response to stress by the neurotransmitter norepinephrine than do male rats. A promising study11 published this year provides the first evidence, in humans, of temporary attenuation of cocaine and alcohol craving, anxiety and negative emotion after stress in females — but not males — using guanfacine, which dampens the body's nervous-system response to stress.

Typically, reasons for male focus in animal-model selection centre on concerns about confounding contributions from the oestrous cycle. But for most applications, female mice tested throughout their hormone cycles display no more variability than males do, as confirmed in a meta-analysis12.

Convention is another probable reason for reliance on the male-only models that have been typical in many research areas for decades. Lack of understanding about the potential magnitude of the effect of sex on the outcome being measured is likely to perpetuate this blind spot.

The sex of cell lines studied in vitro is also too often ignored. Female and male cells respond differently to chemical and microbial stressors. These intrinsic differences are hormone-independent but also exhibit further variation on differentiation and exposure to sex hormones. It is well known that many neurological conditions are sexually dimorphic, and cell-culture studies have demonstrated that male (XY) and female (XX) neurons respond differently to various stimuli. Male neurons are more sensitive to stress from reactive oxygen species and excitatory neurotransmitters; female neurons are more sensitive to some stimuli that prompt the programmed cell death known as apoptosis13. Data support distinct cell-death signalling in female and male neurons with potential applications in treatments for stroke, brain injury and other conditions.

There are several approaches to rigorous preclinical research with a focus on sex and gender14. One, the four-core-genotypes model, can identify and distinguish between the effects of genes and the effects of hormones. The four genotypes in this model are XX gonadal males or females, and XY gonadal males or females. Using this model has, for instance, demonstrated influence of the sex-chromosome complement as a cause of sex differences in obesity and metabolism. On a high-fat diet, mice with two X chromosomes gained more weight than XY mice did, regardless of gonadal sex, and also developed a fatty liver and elevated lipid and insulin levels. These differences are attributable to X-chromosome dosage rather than to Y-chromosome effects15.

Various organizations have taken steps to increase awareness and address unconscious bias about the importance of sex and gender in biomedical research. Several journals now require authors to specify sex- and gender-related information. This includes stating the sex of animals used (or in the case of primary cells or cultures, the sex of the animal from which cells are derived) and that of human participants in published studies.

The NIH is now developing policies that require applicants to report their plans for the balance of male and female cells and animals in preclinical studies in all future applications, unless sex-specific inclusion is unwarranted, based on rigorously defined exceptions. These policies will be rolled out in phases beginning in October 2014, with parallel changes in review activities and requirements. Because our goal is to transform how science is done, the first step will be the development and delivery of training modules and detailed policy informed by ongoing data analysis. As part of its initiative to enhance rigour, the NIH plans to disseminate training on experimental design for NIH staff, trainees and grantees. Evaluation of sex differences will be included in these modules.

In 2013, the ORWH, which oversees the NIH-wide research agenda related to sex and gender influences, launched a programme that provides funding supplements to existing grants to add subjects, tissues or cells of the sex opposite to that used in the original grant, or to increase the power of a study to analyse for a sex or gender difference by adding more subjects of either sex to a sample that already includes both males and females. Although this strategy enables the NIH to capitalize on the value of current research investments, we expect that such a mechanism will no longer be needed once policies on sex influences are implemented for preclinical research.

The ORWH will continue to work with the US Food and Drug Administration to co-fund the Specialized Centers of Research on Sex Differences programme, which supports interdisciplinary collaborations on sex and gender influences in health, and bridges basic- and clinical-research approaches. This programme also facilitates training in sex and gender considerations in experimental design and analysis. The ORWH will leverage lessons learned from these centres.

Reviewers of grant applications must also be brought to the table, because they provide the first insights into taxpayer-funded research. The NIH review process will be modified in phases, and coordinated with requirements for applicants. Reviewers will be enjoined to evaluate applicants' research plans to include, compare and contrast experimental findings in male and female animals and cells.

Furthermore, the NIH will monitor compliance of sex and gender inclusion in preclinical research funded by the agency through data-mining techniques that are currently being developed and implemented. Importantly, because the NIH cannot directly control the publication of sex and gender analyses performed in NIH-funded research, we will continue to partner with publishers to promote the publication of such research results.

In requiring sex and gender inclusion plans in preclinical research, the NIH will ensure that the health of the United States is being served by supporting science that meets the highest standards of rigour.